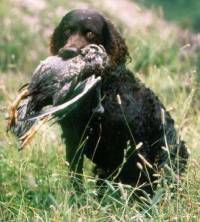 History of the American Water Spaniel

When the Irish people immigrated to USA to escape starvation caused primarily by the potato famine in Ireland, many migrated to USA as well as well as Australia. Hence the development of the American Water Spaniel also began 1850's where, like in Australia there was also a Gold Rush. However, in USA this all-round hunting dog was used to retrieve game in the Fox River Valley region of East-Central Wisconsin. The rivers and large lakes were a waterfowl hunter's paradise! Consequently, they were developed with a slightly different purpose than the Murray of Australia where they they lived on paddle steamers. However, in USA these sturdy little dogs had to fit into small boats as well as work in marsh cover and shake off the cold. 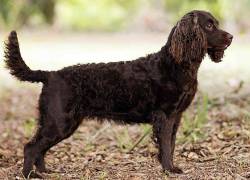 First Registered as a pure breed by the UKC (United Kennel Club) in 1924, they were granted pure breed status by AKC in 1990. The American Water Spaniel differs from the Murray River Retriever of Australia in the following 4 ways: