One of our more recent pure breeds, the Nova Scotia Duck Tolling Retriever is smallest of all Retrievers. He was developed in Nova Scotia, Canada for the special purpose of duck tolling, a trait that makes him a playful companion ideally suitable for modern family life.

The word toller comes from the Middle English word 'tollen', meaning 'to entice, allure or attract'. As such, a tolling dog acts as a decoy, enticing ducks and other waterfowl to follow them by making use of these birds' inquisitive minds. Conventional Retrievers simply work in conjunction with the gun by retrieving game after the hunter shoots it. But first the Toller must entice the waterfowl to swim within the hunters' range in this manner:

The Tolling dog runs, jumps, and plays along the shoreline in full view of a flock of ducks or geese. The dog occasionally disappears, then re-appears, arousing the curiosity of the birds, which come swimming or flying in to investigate. Thus they are lured within gunshot range, and the Toller is subsequently sent out to retrieve any downed birds[1]. 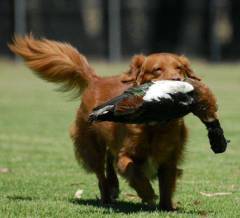 In reality, a Tolling dog has been bred to not only somewhat resemble a Red Fox in appearance, the hunters encourage the dog to mimic the behaviour of the ducks' natural predator. When foxes spot a flock of ducks flying overhead or swimming too far away in water, one fox scampers up and down the shore line while the other hides in nearby undergrowth. So with one fox attracting the curious ducks to paddle towards the shore, its mate springs and catches it for a meal[2].

When these dogs are working, often the hunter throws a ball or sticks to encourage the dog to run up and down the shoreline so it appears to mimic the Red Foxes' behaviour. This is how a Tolling dog with his beautiful tail attracts the curious ducks to within gunshot range of the hunter. Subsequently the dog is sent out to retrieve any wounded birds. 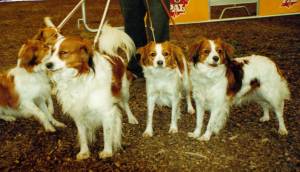 The Nova Scotia Duck Tolling Retriever is most likely a descendant of the Dutch duck decoy breed, the Kooikerhonje [FCI 314]. This breed gets its name from the Dutch word Kooiker meaning a man who traps ducks. The modern Kooikerhonje is basically a parti-coloured red and white dog with a well furnished white tail which was believed to attract the ducks. At just 38 - 40 cms tall, the modern Kooikerhonje is 7 - 11 cms smaller than the modern Nova Scotia Duck Tolling Retriever.

The difference in the the type of terrain over which each of these breeds was required to work, would account for a larger and stronger dog developing in Canada where hundreds of years of genetic diversity produced this larger, basically red dog. Also as instinct to toll is similar in both the Kooikerhonje and the Nova Scotia Duck Toller, these two breeds obviously have a common background. 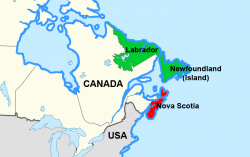 It is also important to take into account that the borders between the European countries we know today have changed as the centuries rolled by. So what is now Holland was part of France when Nova Scotia was settled by the French and these two breeds began to diverge. The theory of Kooikerhonje ancestry is given even more credence when one considers that the French came from what is now Holland when the area of Canada now known as Nova Scotia was settled in the 1600's. 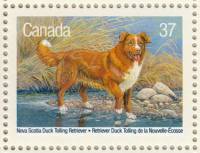 But in the 1700's the British attempted to remove all the French, deporting many to Louisiana or back to France. Those Frenchmen who escaped fled to the great salt-water marshes and islands of Nova Scotia, where one area today is known as 'the French Shore' because of the number of people with French ancestry still living there. So in these remote locations, a tolling dog could have provided the French refugees with sufficient waterfowl to keep them alive during these hard times[1a]. 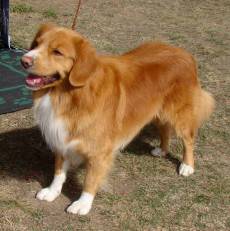 Attracted by the writings of H.Smith promoting the Nova Scotia Duck Toller in the late 1800's, Colonel Colwell became interested and managed to purchase foundation stock from Smith's lines. He eventually established the breed by writing the first detailed Breed Standard and registering the required three generations. The Nova Scotia Duck Tolling Retriever was finally recognised as a pure breed by the Canadian Kennel Club in 1954 but not by Australia until 1991. In 1995, this breed became the official Provincial Dog of Nova Scotia. 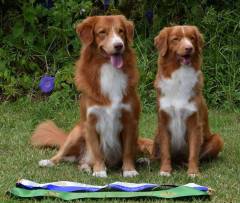 The Toller is a medium-sized, powerful, compact, balanced, agile red coloured dog with some white markings. He stands ideally 45 - 51 cms tall (18 - 20 ins) and weighs somewhere between 17 and 23 kgs (37 - 51 lbs). A strong and able swimmer and natural retriever, he is also playful which is essential to his tolling ability. When moving, his head is carried almost level with the back with his luxurious, heavily feathered tail in constant motion, completing the picture. 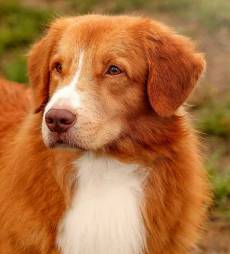 When viewed from above, the broad skull is wedge-shaped and slightly rounded, the occiput not prominent and the cheeks flat. The skull and muzzle length should be equal with a moderate stop between. The strong muzzle tapers in a clean line from stop to nose and houses a normal scissors bite with full dentition. The lips should fit fairly tightly forming a gentle curve in profile, with no heaviness in flews.The nose has wide open nostrils and the colour should blend with that of the coat, that is flesh coloured, brown or black. The medium sized amber to brown coloured eyes should be set well apart and be almond shaped. The eyelids should be the same colour as the lips. The triangular medium sized dropped ears should be somewhat triangular in shape but rounded at the tips. They are set high but well back on the skull, with the base carried to the side of the head. They are well feathered with short hair at the tips. 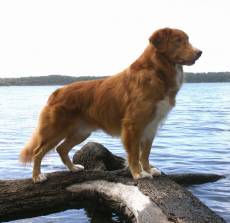 The clean but muscular neck should be of medium length and flow into muscular, well laid shoulder blades. The upper arm should be the same length as the shoulder blades bringing the elbow joint close underneath the body so they can work cleanly and evenly. The straight forelegs should be medium to heavy in bone, appearing as parallel columns, ending in strong slightly sloping pasterns and round, webbed feet. The deep ribs should reach the elbow and be well sprung without being barrel shaped. The back is short and straight with a level topline and a moderate tuck-up underneath the body. The loins are strong and muscular and the hindquarters muscular, broad and square in appearance. The thighs are very muscular with well bent stifles and short hocks. Dewclaws must not be present. 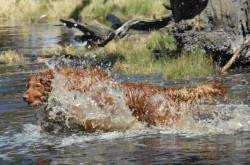 As the Toller was bred to retrieve from icy waters, he must have a water-repellent, double coat of medium length and softness, with a dense, soft undercoat. There is no oiliness typical of other water dogs like the Irish Water Spaniel and Curly Coated Retriever. Instead, to keep the dog warm and repel the water, the dense thickness of the undercoat is more important than the coat's length. There may be a slight wave on the back, but the coat is essentially straight. The feathering behind the ears, at the back of the thighs and forelegs is moderate. There should be no dewclaws on the hindlegs. While the ears and feet may be neatened, the Toller should not be trimmed.

Fox-like in colour, the Toller can be various shades of red or orange with a lighter colour on the feathering of the legs and the underside of the tail. But it is preferable to have some white on the tip of the tail and/or a blaze on the face, and/or white on the chest an/or white on the feet (not exceeding beyond the pasterns). However, it is recommended that a dog of otherwise high quality is not to be penalised for lack of white[1c]. 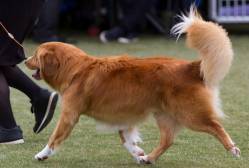 The tail is the Toller's crowning glory, especially when it is full, bushy and luxuriant rather than being feathered like a Setter. Set on following the slight slope of the croup, the tail is broad at the base reaching at least to the hock joint when the dog is at rest. But when alert or moving, the tail curves upwards higher than the topline in 'C' shape like the dog pictured[1b]. This carriage is of historical importance as the tail attracted the curiosity of waterfowl so it's upwards carriage was essential to tolling.

As the Toller is a swimming dog he combines an impression of power with a springy, jaunty gait at a trot, with balanced reach and drive. As speed increases, to maintain static balance the dog should tend towards a single-track with the topline remaining level, so covering the ground with economy of movement.