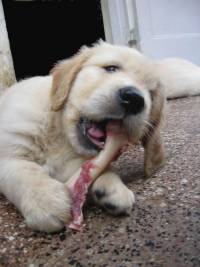 The Golden Retriever is one of our most popular breeds. His medium size, his soft, kindly expression together with his loving, biddable temperament makes him a popular family pet who meets the demands of modern society.

History of the Golden Retriever 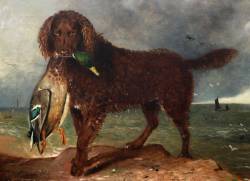 In Scotland, Lord Tweedmouth kept a Stud Book from 1835 which documents the early development of the Golden Retriever. Beginning by using a yellow Wavy (or Flat) Coated Retriever and a Tweed Water Retriever, the Earl of Ilchester, one of Lord Tweedmouth's descendants, methodically continued line-bred these dogs at the Guisachan Estate until 1890[2].

Additionally, Mrs Charlesworth, who formed the first Golden Retriever Club in England in 1911, states that Lord Tweedmouth (then Sir Dudley Majoribanks) obtained his first Golden or Russian (as they were then called) Retrievers when he saw a performing circus at Brighton. He was so impressed by their intelligence, he bought the whole Troupe of 8 and took them back with him to Scotland.

Keeper with Golden at Guisachan 1903

As there appears to be no detailed physical descriptions of the dogs named in Lord Tweedmouth's Stud Book, whether both these above theories are fact, or whether both theories went hand in hand, remains undocumented. But certainly in 1920 the original records which began with Lord Tweedmouth's dogs at the Guisachan Estate in 1835, were accepted by the Kennel Club (UK). 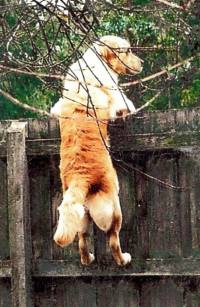 Before 1920 when Lord Tweedmouth's Stud Book was accepted, the Kennel Club (UK) classified Golden Retrievers as yellow coloured Flat Coated Retrievers. By the time Mrs Charlesworth founded the first Golden Retriever Club in 1911, this new breed was rising in popularity both in Field Trials and in shows. For example in 1909, only 8 Goldens were entered at the famous Crufts Dog Show. But by 1949, the entries in the Kennel Club Stud Book (listed by winning at Shows or Field Trials) had reached 198.[8]

Commencing with the solid foundation of records being kept continuously for almost 200 years, the Golden Retriever's enormous popularity is due in no small part to his docile and loving temperament resulting from so many decades of dedicated breeding.

History of Golden Retrievers in Australia

In Australia, although there are some reports of Golden Retrievers being brought here for field work earlier, documented proof of the establishment of the Golden Retriever was not until 1937 when Miss Grice of Mount Macedon in Victoria brought 'Grakle of Tone' from the UK. Several imports followed establishing her Rahween prefix. After World War Two the popularity of the Golden Retriever grew with many new enthusiasts emerging.

In particular, history for the entire dog world was made in 1975 when English frozen semen was brought out here from the big winning English Champion Cambrose Cabus Christopher. Firstly Mrs Hope Phillipson from Queensland produced a litter of four. Then in 1979 after the death of the sire, Fred and Beryl Hession from New South Wales produced a litter of six (pictured), three of which became Champions[5c].

The technique of using frozen semen not only made a solid contribution to Golden Retrievers in Australia, but it also gave impetus for a new direction for our dog world by proving that the best dogs and bloodlines anywhere in the world could be made available to us.