The American Staffordshire Terrier retains its athleticism and some Bulldog characteristics from its past. Its current popularity is testament to how breeders have ensured that both its good looks and temperament meet the social expectations of modern society.

History of the American Staffordshire Terrier 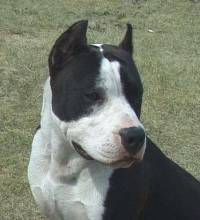 In America, English people who emigrated during the 1800's could not bear to leave their beloved pets behind. So, the forerunners of the American Staffordshire Terriers we know today arrived in America and, as many originated from the coal pits of England, they first became known as American Pit Bull Terriers. Under this name, they were first recognised by the United Kennel Club in America in 1899. 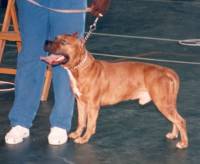 As the Staffordshire Bull Terrier was not recognised by the Kennel Club (UK) or the American Kennel Club at that time, the Americans began developing their Staffords as a larger and more graceful breed than their English counterpart, still distinguished by their cropped ears in countries where ear cropping is allowed. 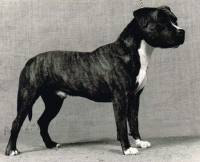 After almost a decade involved with Staffordshire Bull Terriers, in 1984 Bob and Ruth Murdoch decided to introduce the American Staffords into Australia. Because of quarantine complications from mainland USA at that time, the easiest route was through Hawaii. This foundation pair were a bitch Rockisland's Ho'Omua O Hawaii (imp USA) and a dog, Ka-Hanahou Lei O Makana (imp USA). 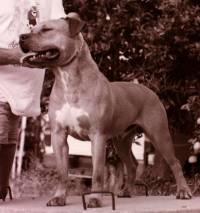 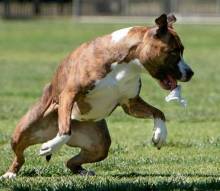 Originating from the same source, almost a century of development has separated these two different breeds which, at first might appear similar. But a closer examination reveals the difference in the general build of these two breeds. Although the Staffordshire Bull Terrier should be obviously smaller, the American Staffordshire has a far more graceful build with his longer neck and slightly sloping topline. 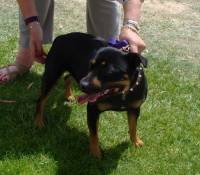 The allowable colours of the two breeds have remained remarkably similar. But two colour combinations are not allowed. These are any shade of liver and black and tan. This is because those who first developed the breed believed these colours indicated cross-breeding. However, it is amazing how these colours can suddenly crop up in the best of litters as evidenced by the attached picture of quite a nicely conformed modern Staffordshire Bull Terrier with the typical black and tan marking pattern.