Other Early Airedales in Victoria

There were a number of other important people in Airedales in Victoria before 1950. Below are some people of whom there is some material so published.

The Mitchell Family began their involvement with in Airedales at this time. Mr Norman ('Judge') Mitchell was a lawyer by profession and a Judge in the High Court. He was also the first Chairman of the Kennel Control Council. It appears that his whole family were Airedale fans. The perpetual trophy, the F M Mitchell Cup that was donated to the Airedale Terrier Club of Victoria for the most successful exhibitor of Airedale Terriers in Puppy Classes, was probably donated in the first instance by Judge Mitchell. Here is a picture of his son, Mr R R Mitchell judging Airedales at the Royal Melbourne Showgrounds in 1967. If you click on the picture, you will see the exhibitor on the far right is Dorothy Netherton with CH SICCAWEI SUNDAY (Imp UK) and next to her is Gesh Lesh with CH STRONGFORT SKIPPER. 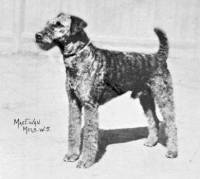 C D Mollison of the Towart prefix, at whose home the Airedale Terrier Club of Victoria was formed, imported the bitch KIERBY MERMAID and this dog pictured CH JOVIAL PEDLAR (Imp UK) who was later sold to NSW.

Mr Norman Myers of the Austral imported CH EASTHORPE JUNIPER and CH WALNUT BRIAN described as 'a glorious brace' who laid the foundation for the 'Omuka' Kennels of Sister Gerrard. But when EASTHORPE JUNIPER was imported, she was in whelp to the famous English dog CLONMELL MONARQUE which produced AUSTRAL COURTESY who was mated in turn to Neville Whiting's ARDROSS AUTOCRAT (imp UK). CH WALNUT BRIAN produced a promising litter to CH MILLSWYN BUSY BEE. AUSTRAL SUPERBUS, sired by CH ILAN FLYAWAY (imp UK) was also a founding Airedale for Mrs Florence of the Millswyn Kennels, producing CH MILLSWYN BOBSIE.

Just prior to World War Two, Me Quin imported the influential dog CH CRANFIELD CASUIST who was influential in keeping Airedales going during the War[1]. He also imported SINGING FOOL.

He later became President of the Kennel Control Council (KCC) in Victoria, owned Airedales for almost all his life, and exercised them on the oval of Scotch College which was close to his home. The final Airedale he owned was one of ours (Rangeaire).

The 'Hill' Boarding Kennels in Warrigal Road Oakleigh South were famous boarding kennels for all breeds operating just North of North Road on the city side. I well remember going there as a child - that would have been post World War Two - the late 1940's or early 1950's. I had a Sealyham Terrier which they used at stud - we had problems with the mating!  The Hill sisters (nee Green) were both slim young ladies Lorna was fair haired and the other Eila dark haired. The fair headed one was Lorna later married and became Lorna Schuster. She took her old kennel prefix 'Hillmere' with her and continued involvement with showing and doing obedience with them until her death in her 80's.

They started before 1935 when they had a dog called "Scotchmere Chieftain", a double cross (grandfather on both sides) to Bill Brilliant's famous dog, Ch Stoneleigh Stormer. They also had at least 4 bitches - Maryvale Marionette, Maryvale Maravene, Maryvale Mockery and Hillmere Happy-go-lucky. Their initial breeding was with Ch Wolstanton Lucky Strike. At this point in time, I have no more information on this kennel.