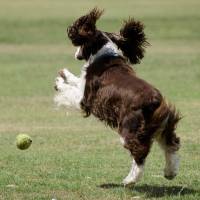 There is no logical reason why the English and Welsh Springer Spaniels were named 'Springers'. Instead the function of all the different breeds of Sporting Spaniels was to flush out birds, causing them to rise, 'start' or take flight or, in the case of game, cause it to 'start' running. Then the hunter could safely shoot at it. If the spaniel kept chasing the already moving game like the modern dog pictured chasing the already moving ball, the spaniel could be accidentally shot!

Additionally there is no reason why the English and Welsh Springer Spaniels should be lumped together as though they had some historical or other connection. This is further described

"The decision of the Kennel Club, when they re-organised and and re-classified the spaniel breeds into separate varieties in 1902, to repeat the word 'Springer' as an adjective to both titles was, in retrospect, unfortunate, because it causes a great deal of confusion from time to time and suggests a closer link than actually exists. Springing, or starting, game is the function expected of all spaniels, whatever their official title"[3] 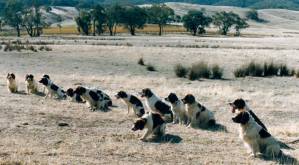 The 'Springer' Spaniels typically worked in more open country than the thick undergrowth for which Cocker, Sussex and Clumber were developed. Formerly called the Norfolk Spaniel, the English Springer is the tallest of seven Land Spaniel breeds in this section and Welsh is the closest to those described in the History of Spaniels 1570 AD. In Australia, English Springers are also the most commonly used Spaniels in today's Field Trials and as rough shooters dogs.

History of the English Springer Spaniel 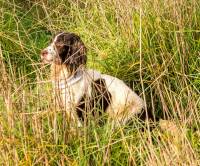 Historically the way Spaniels typically worked was flushing and retrieving game contrary to the way Setters worked as outlined in the History of Setters which was to silently crouch, simply locating the prey. As the years rolled by and guns became capable of shooting multiple rounds, the distinction between Setting Spaniels or Setters and Spaniels also became more specific. However, the basically white coat remained preferable when the Norfolk Spaniel gained acclaim as a separate breed. By the mid-1800 it was written "For appearance, I prefer Norfolk dogs, which have a pre-ponderance of liver colour; but for use it is better to have plenty of white, as they are more readily seen."[1] 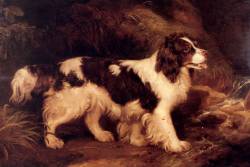 The original name Norfolk Spaniel was because of the notoriety they gained when they were first developed. The bloodlines were jealously guarded by the gamekeepers of generations of Dukes of Norfolk. It is important to note that they were not called Norfolk because of any geographical place where they developed. In 1902 the Sporting Spaniel Society Club decided to call them 'English Springers other than Clumber, Sussex and Field' and then the Kennel Club followed and included the Welsh. So the Spaniel Separation Saga continued until well into the 1900's while all seven of these Sporting Spaniel breeds each developed their own Breed Type. 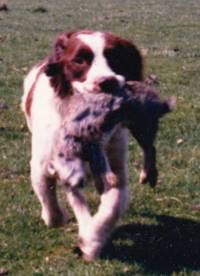 But the English Springer's separation began as a breed in 1902. It was written into the first Breed Standard that the English Springer's height at shoulder should be about equal to his length from the top of the withers to the root of tail. This immediately separated them from the craze for the short legs that plagued the Field, Sussex and Clumber Spaniels. It is also interesting to note that the colour designated in the first Breed Standard influenced by members of the Sporting Spaniel club who worked these dogs stated: "liver and white or black and white (with or without tan)... but the pied colours are preferable, however, as (they are) more easily seen in cover'[2].

History of Springer Spaniels in Australia 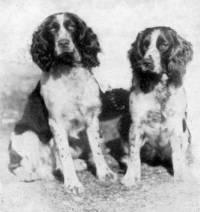 The first record of an English Springer being imported into Australia was 'Jacke' a liver and white imported in 1906[4]. There appears no further record until the 1930's when a pair bred by Frank Warner Hill went to Tasmania. Then different exports went to Melbourne and founded the 'Gildabrook' Kennels of Mr Fildes who said in his advertisement in 1935 "All stock guaranteed to be true English Springer... sent on approval anywhere against cash"[5]. It appears this kennel lasted through World War Two as it had four of the 20 entries that competed at the 1947 Royal Melbourne Show. 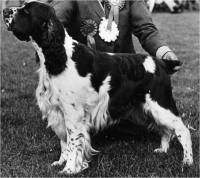 In 1968 English Springers in Australia were boosted by the importation of English Show Champion Moorcliff Fleetwood Gamecock from UK to Adelaide in South Australia. He won 19 English CC's in England and among his numerous wins here was 5 Best Exhibit in Show including Adelaide Royal and the 'Pal' International. He founded a dynasty which spread throughout Australia, siring Champions for many of our most famous English Springer Spaniel kennels[6].

The Welsh Springers were not as fortunate as their English counterparts and there seems to be no proof of them being registered here until well into the 1970's.

History of the Welsh Springer Spaniel 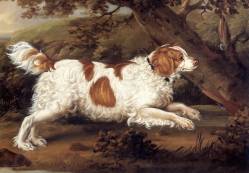 The Welsh Springer Spaniel, formerly called the Welsh Cocker was also designated as a Springer in 1902 at the same time as the English but his colour was always red and white only. In the History of Spaniels, of particular note when describing the early Spaniels, Caius (in 1534) wrote:"The most part of their skin(s) is white, and if they are marked with and spots, these are commonly red". So arguably the Welsh Springer could be considered the oldest of the Spaniel breeds. But although the Welsh Springer worked springing game in a similar manner to the other English Spaniels, he developed quite separately. 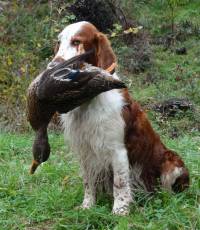 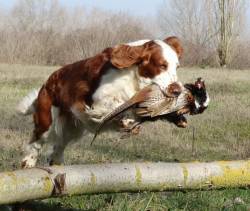 The Welsh Cocker had been kept pure long before this recognition by several families in the large estates of Wales. So this basically white Spaniel with red markings and vine shaped ears has been depicted by many artists and described by many authors for centuries. This is testament to the bloodlines having been so jealously guarded by the gentry in Wales.

Comparison between the English and Welsh Springer Spaniels

[5] 'KCC of Victoria Annual 'On the Bench and in the Field 1935' published by F C Morant 7 Crimea St St Kilda printed by the Horticultural Press Pty Ltd., 78a Victoria St Melbourne Page 11