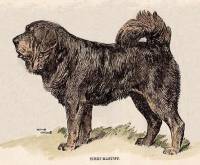 The Livestock Guardian Dog and guard dog, the Tibetan Mastiff developed in Tibet, a cradle of civilisation isolated from the rest of the world for thousands of years because of the impassable Himalayas Mountains. Like other breeds developed in high mountain regions, Tibetan Mastiffs are distinguished by their strength, power, courage and frequently also by their ferocity[4].

The History of the Tibetan Mastiff 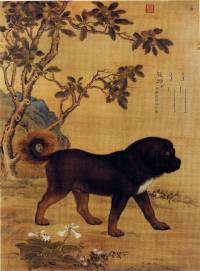 The antiquity of the Tibetan Mastiff is well documented. One record of 1121 BC tells of the people of Liu, a country situated west of China, sent to the Emperor a great dog of the Tibetan kind. This reference goes on to say:

The Tibet Mastiff is one of the most ancient of the canine race, for his type has been preserved unchanged, since a period dating long anterior to the beginning of the Christian era.

There can be no doubt that the great dogs depicted in the sculptures from the palace of Nimrod (640BC) are of this and no other breed. In these cavern representations accompanying sport-loving Assyrian kings, we have the wrinkled head with pendant ears, the massive neck, the sturdy fore-quarters, and occasionally also the heavy tail curled over the level back - all characteristics of the Asiatic Mastiff[1].

The next record we could find of these dogs was around 1275 AD when Marco Polo visited China's Szchuaun Province and encountered Tibetan traders. Polo reported that they have in this province a large breed of dogs, so fierce and bold that every man who goes on a journey takes with him a couple of these dogs to protect him from wild animals, presumably tigers[2]. It is interesting to note that according to the notation on the historical picture on the right, the black and tan Thibetan Mastiff has hind dewclaws whereas the red dog does not.

By the 1800's some Tibetans owned herds of yaks, a type of Asian oxen which was not only a beast of burden, but also provided meat and clothing. In 1848 it was reported that flocks of Yak were diligently guarded by these dogs that were bred in the tableland of the Himalayas Mountains bordering on Tibet[2]. 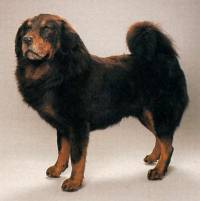 The dog on the right was brought from Tibet by King George V and presented to London Zoo and preserved by taxidermy in the British Museum of Natural Science. It was reported that dogs like were defenders of property and almost every conceivable type of dwelling in Tibet.

So the Tibetan Mastiff filled the dual role of being a Livestock Guardian Dog and a defending Mastiff. So whether savaged by nature or soured by confinement, these Tibetan Mastiffs were so impetuously furious that it was unsafe to approach them. At that time every writer who described these dogs spoke of their noble size, their ferocity, and their hostility towards strangers[3].

By the early 1900's Major W Dougall, who was involved with a British Expedition in Tibet, brought back with him a Thibet Mastiff named 'Bhotean' who was exhibited at the Crystal Palace Show in England in 1906.  Note the English them dropped the 'h' out of Thibet and called these dogs Tibetan Mastiffs. They were not  brought into Australia until the 1980's.

The temperament of the Tibetan Mastiff historically was typical of a courageous Livestock Guardian Dog and must always be respected despite his outwardly dignified deportment. The Breed Standard describes his courage and suspicious nature in defence of his herds as well as the property and home of his master. Typical of a Livestock Guardian Dog, he attacks silently if necessary, regarding his territory as his own property and will not tolerate any other living creature in it. During the day, he likes to keep a lying position enabling him to control his area. At night, he is always on the move.

The modern Tibetan Mastiff is a large powerfully built well-muscled agile dog 26 inches high (66 cms) and the bitches 24 inches high (61cms) with a body slightly longer than this height at shoulder. It has a noble look enhanced by a mane and balanced by a well feathered tail carried over the back. 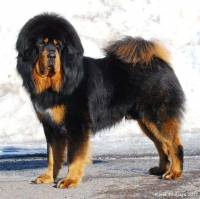 The whole head is broad with a strongly defined occiput and a marked stop. The muzzle is slightly shorter than the skull and is blunt and square when viewed from any angle. There can be some wrinkling on the head from the eyes to the corner of the mouth. The oval eyes are medium in size and the rims close fitting showing no haw. The ears are also medium in size, triangular in shape, set not too low and carried close to the head. The jaws are strong housing preferably full dentition in a normal scissors bite although a level bite is also acceptable. 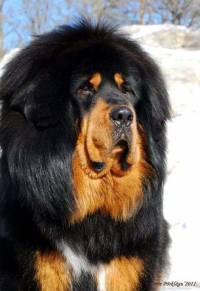 The neck is strong and well-muscled without too much dewlap. The chest is rather deep, of moderate breadth and the ribcage oval with the brisket reaching just to the elbows or slightly below. The shoulders are well laid and the legs are strong and well-boned with only slightly sloping pasterns. The large strong round compact feet with thick pads have plenty of feathering between the toes to protect the feet from harsh conditions. 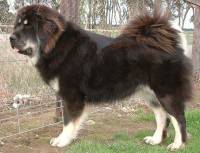 The body is slightly longer than its height at withers in the ratio of 10:9. The back is strong and straight. The loins are muscular with only a slight slope to the croup and a high set tail. The hindquarters are powerful and strong with low set hocks that may carry single or double dewclaws. The presence or absence of dewclaws was has historically significance. The medium to long well feathered tail is loosely curled over the back to one side. 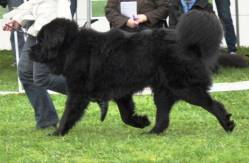 The movement is balanced, powerful and free, but measured and deliberate, tending to single track at speed. Males carry more coat than the females, especially the mane and trousers. The Tibetan Mastiff is double coated, the quality of the coat being more important than the quantity. The  undercoat must be dense and woolly to keep the dog warm especially in the cold weather and the hard straight top weather proof coat that should be never silky, curly or wavy. 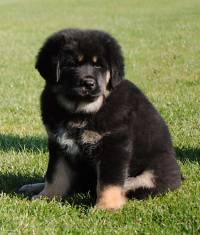 He comes in rich black or slate, with or without tan in the usual black and tan colour pattern that is above the eyes, on the muzzle, on the chest, on the lower legs and around the vent. Whole rich coloured rich golden is also acceptable. Spectacle marking or a white patch on the chest is also acceptable but if there are white markings on the feet, these should only be minimal. Other colours such as cream, chocolate/liver, parti-coloured, brindle or flecked are undesirable. 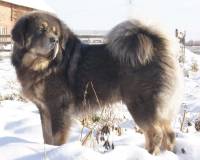 [3] William Youatt, 'The Dog' published 1848 London Charles Knight Fleet Street (under the Superintendence of the Society for the Diffusion of Useful Knowledge.) Chapter 2 'The Varieties of the Dog First Division, the Thibet Dog Page 17