The Australian Kelpie was developed in the 1800's to work on Australia's sheep stations when they were expanding into an unfenced wilderness. Today, the Kelpie made famous by the Australian iconic film, 'Red Dog' is a lithe, active, supple dog capable of untiring work with a natural instinct to work as a Herding Sheepdog.

The Origin of the Australian Kelpie 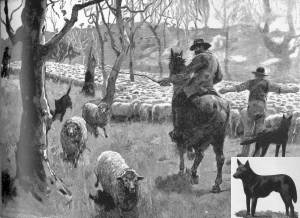 The development of the Kelpie  probably began in 1835 when the Henty brothers sailed from Van Diemans Land and squatted on some 80 kilometres north of what is now Portland, in Victoria. By the time they had established the first Merino Downs Run, they owned some 30,000 sheep and had imported 15 Sheepdogs[6].

With no adequate fencing Dingos would certainly have roamed across what the Henty brothers claimed as their land. Consequently, secret or unplanned matings between the imported sheepdogs and wild Dingos would have undoubtedly occurred. 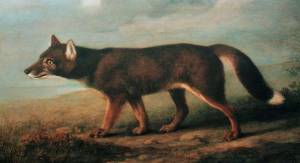 British Painting of the Dingo c1772

For more than 10,000 years before British settlement, Dingoes roamed freely across Australia, together with the Aboriginal people. The Dingo was first discovered by the British in 1777 when James Cook's botanist took sufficient evidence of it back to England for this black and tan Dingo to be painted by George Stubbs.

Consequently when the British arrived in Australia in 1788, the limited information available about Dingos was in descriptions that appeared in English publications. These caused prejudice among the newly settled Australian sheep owners, who assumed that Dingos killed sheep. This bias became an obsession which extended beyond wild Dingos to any cross-breeds that looked like they might contain Dingo blood. With this firm belief, for almost a century any surreptitious unplanned or planned matings that undoubtedly occurred between the imported British sheepdogs and Dingos were concealed or emphatically denied!

An example of this adverse publicity appeared in the 1789 publication 'the History of Quadrupeds', where the well respected writer Thomas Bewick described the Dingo as a 'The New South Wales Wolf'. It reads: 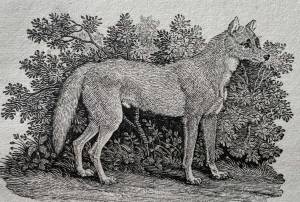 "Has been called a Dog; but its wild and savage nature seems strongly to point out its affinity to the wolf; to which in other respects it bears a great resemblance. It neither barks nor growls ; but when vexed, erects the hairs of its while body like bristles and appears very furious. It is fond of rabbits and poultry which it eagerly devours raw.

One of them sent to this country (England) from Botany Bay was extremely nimble; and so fierce as to seize on every animal it saw. If not restrained, it would have run down Deer and Sheep: an Ass had also nearly fallen a victim to its fury[7]".

No wonder when Australia was first colonised by the British they assumed that Dingos or any cross-breed that was suspected of containing Dingo blood would kill their sheep! Consequently, Dingos were treated as vermin and mercilessly shot. Because of this entrenched bias, even today there are those who refuse to acknowledge Dingo-British Sheepdog cross alliances and still treat Dingos as vermin.

Kelpie Characteristics Inherited from the Dingo 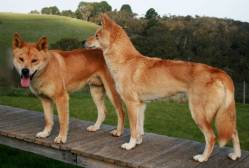 However, for centuries, Dingos have been part of Aboriginal culture, living in harmony with their traditional societies. The pups were often raised by aboriginal women. Modern technology also proves that our wild dog, the Australian Dingo has DNA present in some Kelpies' genomes. With the main consideration on ability to work, although no records exist, breeding with tame Dingos kept by Aboriginal people probably occurred.

Additionally, new-born Dingo pups would be taken from the den and raised by an experienced working sheepdog mother together with her own litter. Further selection occurred when the pups were weaned, Only those which displayed the desired physical attributes of the Dingo's athleticism and its exceptionally strong feet and pads were retained.

Later as a young adult, careful observation would reveal that a few of these Dingos had become '.. as tame and as cattle- [or sheep-] educated as wild things could be' [8].  Of these, only those pups which would instinctively behave like sheepdogs, were retained for future breeding. Consequently, with careful selection of useful Dingo characteristics mixed with those of British Sheepdogs, the Kelpie became famous for its ability to function all day in Australia's harsh terrain and unforgiving climate. 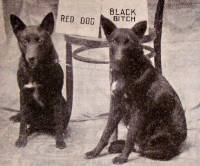 Around 1904 a famous dog known as a 'Gleesons Kelpie" ('Kelpie' coming from the Scottish word meaning 'spirit of the waters') first described by the famous Australian writer Robert Kaleski.

In 1912 when Australia's first Stud Book 'Tyzack's Annual' was published, it  recognised the distinct breed type of the Kelpie. 23 were listed under the two combined names, 'Kelpies and Barbs', the latter historically being black[3]. This publication voiced criticism of the NSW Breed Standard that was in place at that time. It was also critical of claiming the Kelpie as an Australian breed stating that Dingo crosses spoiled him and that authorities on Kelpies hitherto unheard of were springing up like mushrooms[3a]! However, two years later, the Kelpie's legendary working ability is best summed up by Kaleski when, in 1914 he wrote: 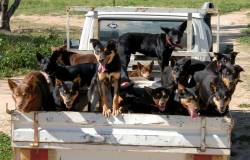 "When foreigners read in their papers about the great sheep-runs of Australia, they wonder how on earth such big mobs of sheep, running on such big areas, can be handled to profit. If they only knew it, the answer is very simple and to get over the difficulty, Australia has produced a special dog for the work; and the name of the dog is Kelpie.....[1a]

The best way to understand the Kelpie's value is to watch him at work in a league-wide paddock somewhere back of Bourke, mustering sheep for the shearing. As the stockman rides along the center of the paddock, cracking his big whip, the Kelpie is away to the side he is bidden. Keeping parallel with the stockman, at an easy swinging gallop, he works between him and the fence."[1] 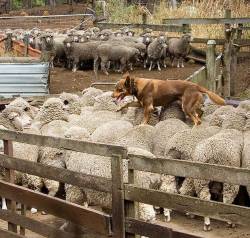 '... one reason I support this theory is the amazing stamina of the Australian Kelpie compared with other dogs; his outstanding endurance could come only from the Dingo. Also his style of working is so different from that of the working sheepdogs of Scotland, that one is justified in thinking that the Dingo has been in the early foundation of this remarkable sheepdog'.[5]

According to Australia's first Stud Book, 'Tyzack's Annual' was published 1912, the first Kelpie Breed Standard was invented in Sydney in 1907[3a]. Three Kelpies were listed in the Queensland Board of Control's Stud Book in 1926. In 1932 the Kennel Control Council of Victoria prepared and adopted another Breed Standard, calling them 'The Australian Kelpie'[2]. In 1963 the Breed Standard we have today was adopted and approved by the ANKC. 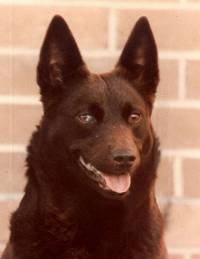 The head is broad between the ears, with a slightly skull rounded with a straight profile and pronounced stop, clean cheeks and a muzzle preferably slightly shorter than the skull. This gives a fox-like expression, complemented by brown eyes harmonising with the coat colour. The ears are pricked and run to a fine point at the tips. The dog has a normal scissors bite. 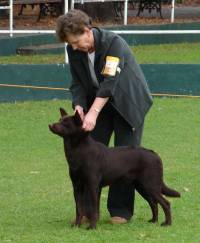 The neck and body are in balance when you consider the length of the dog from front of chest to rear of body is greater than the height at withers in the proportion of 10 is to 9. The forelegs have strong but refined bone with a slight slope in the pastern to ensure flexibility of movement and the ability to turn quickly. The feet should be round and strong with particularly deep pads with thick skin. The chest must be deep rather than wide and the topline firm and level. The loins are strong and well-muscled  and the flanks deep. The hindquarters should show breadth and strength, with the croup rather long and sloping. The stifles are well turned and the hocks fairly well let down. The tail should blend into a sloping croup, reach approximately to the hock and be furnished with a good brush.

His free and tireless movement and almost limitless stamina should illustrate his perfectly sound construction. When the dog comes to rest it stands four square.

The typical double coat has short dense undercoat and a rain-resisting straight outer coat approximately one inch long. There is a definite ruff around the neck and mild breaching behind the legs. He comes in black, black and tan, red, red and tan, fawn, chocolate, and smoke blue and is 17 - 20 inches high.

[4] Bill Robertson, 'Origins of the Australian Kelpie, Exposing Myths and Fabrications from the Past' Self Published Chapter 21 'The Dingo Impact' Page 115

[7] Thomas Bewick 'The History of Quadrupeds' printed by Edw.Walker for T. Bewick, and son; Longman and Co. London; and Wilson and Sons, York. First Published 1789 Page 319