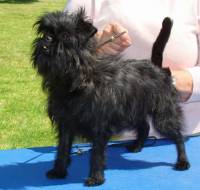 The Affenpinscher is a terrier like dog originally bred in Germany for ratting. He only comes in a rough coat and is always black in colour, although grey shading is permissible. His mischievous monkey-like expression indicate he could share a common background with the Griffon Bruxellois which originated nearby Belgium with which Germany shares a common border.

History of the Affenpinscher

The Affenpinscher developed in Southern Germany during the early 1900's with the word 'Affen' being the German word for monkey. Whilst not really a toy terrier, the Affenpinscher accomplished the same job. He killed rats and mice in the old German farms.

To separate them from their Miniature Schnauzer cousins, their First Breed Standard was that of the Berlin Lapdog Club.

The Affenpinscher becomes a Pure Breed

Affenpinschers, historically small Rough Haired Pinschers, were first recorded in the second volume of the German Stud Books 1903 -1907. At this time colours included red, wheaten, silver grey as well as black, black and tan and black with grey shadings and Affenpinschers were registered in Pinscher-Schnauzer Stud Book. From 1917 to 1923 60% of all registered Affenpinschers were colours other than black. It was then decided that black best suited their personality. So by 1935, 78% of all registered dogs were black[1].

Comparison between Affenpinscher and Griffon Bruxellois