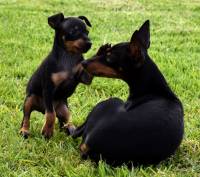 There are two smooth coated toy dogs of roughly the same size. Historically both were ratting dogs. Because of this, they are compared here. But in reality, they are quite different! The first, the English Toy Terrier (Black and Tan), is still called the Toy Manchester in USA and Canada because it is considered the toy variety of the Manchester Terrier. But his origin was in England. The second, the Miniature Pinscher who, at first glance he looks remarkably similar, but comes from Germany.

History of the English Toy Terrier (Black and Tan) In England, the Black and Tan smooth coated Terrier is arguably the oldest identifiable Terrier, mentioned in the Doomsday Book from 1066. Known in the rapidly growing town of Manchester since the early 1800's, today it is separated by weight into two separate breeds. The larger dog (over 7 pounds) is called the Manchester Terrier and is classified in the Terrier Group. But it is the smaller dog (under 7 pounds) that is considered here and is classified in the Toy Group both by the Kennel Club (UK) and in Australia where is called the English Toy Terrier (Black and Tan). In the Victorian era when they were becoming popular, they were prized both for their ratting ability and good looks. But Victorian women desired a smaller Manchester. So a toy was developed by repeatedly breeding smaller Manchester's. Being under 7 lbs, he was the ideal ladies companion - a smart streamlined little dog while still able to rat successfully. On the left we have the Toy Terrier 'Belle' who won at Birmingham in 1881 as did the Black and Tan Terrier 'Queen lll' who won at the same Show. This engraving emphasises that the English (Black and Tan) Toy Terrier, weighing 3 - 4 pounds, is an exact replica of the larger variety then weighing 15 - 16 pounds. Except for size, the little one should be an exact copy of the larger one, possessing equal hardihood and spirit[6].

He was recognised by the Kennel Club (UK) in 1860 and appears in Division 2 of the first English Stud Book as a Toy Terrier under 5 pounds. His size is also demonstrated by the drawing above of the Toy Terrier standing beside a bucket and broom.

Name Changes and its Consequences 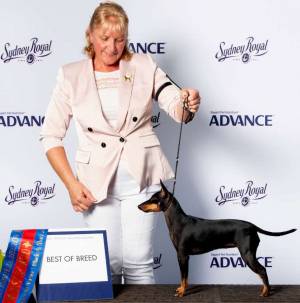 Meanwhile in England with the name change in USA combined with some minor variations in the breed standards in these two countries, the Toy Manchester of America and the English Toy Terrier (Black and Tan) of England had become two separate breeds.

In America, with regular trade between USA and Manchester in England, it is no surprise that this small Toy English Black-and-tan terrier appeared in American Stud Book from 1886. For the next 40 years it was called 'Toy Terrier other than Yorkshire'[3]. But during the 1930's it was re-named 'Toy Manchester Terrier' a name by which it is still called in USA today.

However, in 2005 the Kennel Club (UK) realised the difficulties of splitting the gene pool. So today the interbreeding between the Toy Manchester of USA and the English Toy Terrier (Black and Tan) of UK has been resumed which has generally progressed the breed across the world. 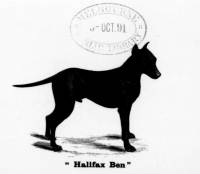 In Australia, the English Toy Terrier was probably brought here as ratting terriers by our early settlers. He was certainly exhibited at the first dog show held in Melbourne, Australia in 1864[5] where 8 were listed as Smooth-Haired Terriers black and tan or black, under 7 pounds. Then in our first Stud Book, Tyzack's Annual[4] , 1 import and another 24 including 'Halifax Ben' (pictured) were listed. Small bands of enthusiasts have kept this breed alive, albeit spasmodically, ever since. As this is an Australian website based on English Breed Standards, inter-breeding with the American Toy Terrier is allowed here but the breed is still called the English Toy Terrier (Black and Tan). 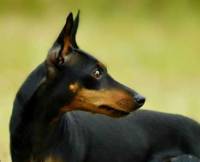 A constant band of devotees over two centuries has ensured this elegantly shaped sleek black-and-tan toy terrier with its stunning markings has survived without suffering the same exaggerations as most other breeds demanded by the show ring over the same period.

The English Toy Terrier (Black and Tan) is a Toy with Terrier characteristics but at the same time should look elegant and sleekly built. His wedge-shaped head should be long and narrow with a flat skull, clean through the cheeks and a slight stop. The muzzle should be well filled up under eyes, with tight lips housing a normal scissors bite. The relatively small dark almond shaped eyes, black nose and characteristic candle-flame ears complete his unique expression, typifying the English Toy Terrier. The accompanying picture demonstrates how the thin leather of this high placed ear with its slightly pointed tips, faces the front. 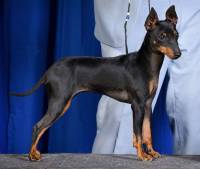 The neck should be long and graceful, slightly arched, sloping elegantly into well laid shoulders. The elbows are set close to chest providing a straight front with fine bone.  The body is compact, with the back very slightly curving from behind shoulder to loin, falling again to root of tail. The chest should be narrow and deep with ribs well sprung, the loins well cut up and the buttocks gently rounded, this graceful outline being completed by a low set tail which should not reach below the hock.

He moves with a strong, driving power from the rear with a front to match, so the dog flows smoothly over the ground indicating true soundness. Ideally the English Toy Terrier should stand 10 to 12 inches high and weigh 6 to 8 pounds.

His colour is most important and has been ruthlessly selected for over two centuries. The placement of the black in relation to the tan has been meticulously selected for by judges, breeders and enthusiasts, making the English Toy Terrier unique. The colour is explained in detail by following this link to the Manchester Terrier.

[4] "Tyzack's Annual" Compiled by T.W.Tyzack and C.S. Turner published by the Victorian Poultry and Kennel Club 1912, printed by Bellmaine Bros., Printers 66 - 70 Flinders Lane Melbourne Australia, just one one import 'Jack' on Page 93 whose pedigree could traced so was assumed that the 21 in the Stud Book on P. 54 were bred down from larger ones