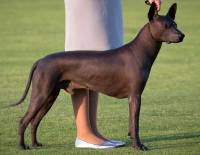 Body terminology varies from one Breed Standard to another. Here are a few definitions that may assist you when assessing a the dog in profile. This section discusses body height and length proportions and also the special requirement of spanning a terrier.

Height at Shoulder and Topline 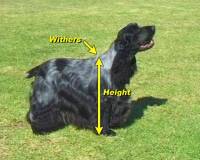 The term 'height at shoulder' is the distance from withers to ground as shown.

In profile what is commonly called the 'topline' also begins at the withers where the neck ends, and finishes where the tail begins. 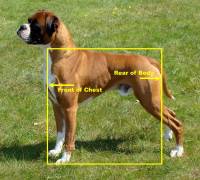 Although the Boxer pictured does not have the high tail set of a terrier, it also has a body that is 'short' or 'compact'. Similar to the Airedale, the length of the body from the front of the prosternum to the rear of the body should equal its height at shoulder. The difference is the high set tail which shortens the apparent topline giving the optical illusion that the Airedale has a shorter body than the Boxer.

In profile, the underline begins at the prosternum, the most forward projection of the rib cage. It then runs along the sternum underneath the ribcage and ends at belly.

Body Longer than Height at Withers 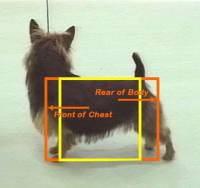 On the other hand, the Australian Terrier is described as having a body that is rather long in proportion to its height. That means compared with the 'square' of the Airedale, it has a chest in front of the 'square' and some buttock behind.

There are several breeds that have bodies that are required to be longer than their height at shoulder. Sometimes a proportional ratio is quoted like the 12:11 of the Weimaraner and 10:9 of the Australian Cattle Dog. In other breeds like the Sealyham Terrier it is called oblong or rectangular.

The length of the body is vital to each breed's general balance and outline. With the Breed Standard acting as your guide, once you have developed that elusive 'Eye for a Dog' you will know at a glance whether or not the dog under consideration has a body length that correctly balances its other body proportions.

A dog that is not only of a square appearance but also thick set throughout like a Pug is also often referred to as cobby, a term derived from the word 'cob' which is the type of horse pictured. A dog which is not only heavily built but also has a clumsy gait is often called cloddy. The old term lumber also describes a dog with a cloddy build and cumbersome or clumsy movement. For example the General Appearance of the Flat Coated Retriever Breed Standard refers to showing 'strength without lumber'. 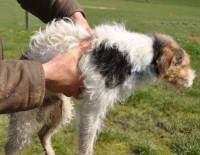 A. Thumbs touching at back

Spanning a terrier with an average sized man's hand has become the accepted practice with which to gauge whether the terrier is capable of being functional. For example, a fox's den may be within a hollow tree or log, an old excavated rabbit warren, or within the unforgiving confines of a culvert or drain. So, the terrier must be sufficiently flexible as well as possessing all other physical characteristics that make it capable of working within the confines of these situations.

Spanning a terrier is a technique which tests terriers' ability to fit into an underground critter's den and retreat unharmed. As reference to this technique is required by certain Breed Standards, competent terrier judges are expected to span the following breeds of terriers: 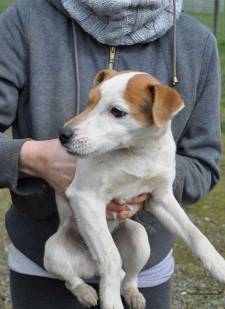 How to Span a Terrier

Because people have  different sized hands, their span varies. Those with hand spans large enough to permit their fingers to interlock, have the advantage of also being able to assess more accurately the flexibility of the rib cage. But because terrier judges are expected to know how to correctly span a terrier, those with smaller hands should still be able to gauge the size of the ribcage.

In a show ring situation, this is the generally accepted technique: 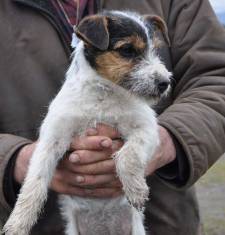 A. With the terrier facing away from you, place thumbs together over dogs back at the top of his shoulder blades and put your hands around his ribs at their deepest point behind the armpits as in picture A above.

B. Lift the front feet up making sure the dog's back feet are still on the table or at least supported. If your hands are of sufficient size, so finger can interlock, you can assess the terrier's flexibility.

C. If your hand span is small, confirm your middle fingers are at least touching so at least you are able to gauge the size of the ribcage.