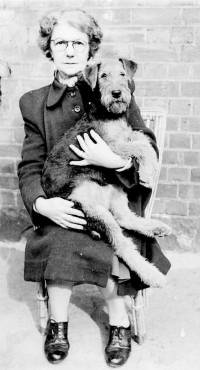 I knew May (Mabel Violet) Platts well as a rival competitor. I believe it is fair to say that May not only had an insatiable passion for Airedales that ruled her life, Airedales were her life. I feel no History of Airedales in Australia is complete without acknowledgement of her contribution to the breed. Despite her gruff manner, she started several breeders off and influenced the whole breed in Australia, mainly through the string of stud dogs she imported from England. 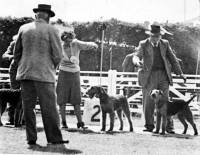 May had a long suffering husband Maurice, a TPI (Totally and Permanently Incapacitated) War veteran who accompanied her to Shows. He was a quiet fellow and I never saw them argue. When Maurice died on a Friday, I well remember the next day. There was May, Airedale in one hand, tissues in the other, stating that it was Maurice's last words that she should exhibit at that Show! Of course that day she won Best Exhibit all-breeds! Such was the passion for exhibiting that dominated her life. 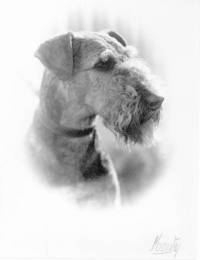 Childless, May adopted a girl Betty as a teenager. Betty was legally mentally handicapped. Because Betty was forced to work relentlessly as a kennel maid in May's kennels, those who knew the situation were unimpressed. Of course Betty outlived May and resided in a nursing home after losing her mind completely.

May was English and came to Australia just after the First World War. As May grew up with a family Airedale, first she bought several Airedales as pets. Then in 1943 she bought her first successful showdog from Sister Gerrard of Omuka Kennels, KCC CH OMUKA MONTY.

Their first bitch, from the same Kennels was OMUKA WINSOME who produced their first Exmoor Champion KCC CH EXMOOR EXTACY. Pictured are Mae with EXMOOR EXCELLENT and her husband Maurice with Ch EXMOOR TINKER. 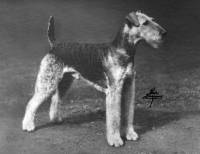 It appeared to me that May exhibited at every Show. I clearly remember in the early 1950's the bus that used to collect exhibitors to go to country Shows. When May entered the bus with her Airedale, I remember how scared I was and how I clutched my little Seayham in my arms as she went down to the back seat with her Airedale lunging at every other dog on the bus! Later Maurice drove her to Shows and I remember she was always there before me - if there was one tree on the grounds, by 6AM she was already parked under it, with her camping stove alight, having her morning cuppa.

Prior to 1960, if a dog had gained sufficient points (100) to qualify for the title of Champion in its own State, it could be taken interstate and gain 25 extra points in order to gain a Champion title in that State. After the ANKC was formed, the system of awarding points was changed. The dog could earn its points anywhere in Australia and gain the title, Australian Champion which I shall abbreviate simply to Ch. 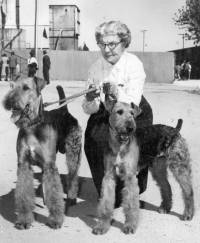 Exmoor Kennels was probably best known for importing 7 stud dogs. She never imported a bitch. From the handful of pedigrees that have survived, it appears she mated all her bitches to the previous import, which often included father-daughter matings.

On the left we have Mae Platts with her second import Ch AUGUSTUS OF MURLITE (imp UK) and KCC Ch EXMOOR EXTRAORDINARY. On the right we have Mae Platts with OLD FARM BOY (imp UK) and 'Snowy' Rhodes with Ch RAMU OF RHODESIA competing at the Royal Melbourne Show. It was from a succession of three of her imported dogs mated to her 'current' import that Ch Moylarg Sheba, the mother of the foundation bitch of Rangeaire, was bred.

Remembering that importing dogs into Australia before around 1970 involved bringing them in by boat and then there was six months quarantine. So importing dogs at that time was a very expensive way of improving bloodlines. Imported dogs hit Australia at that time with great pomp and ceremony. However, her third import was Ch Krescent Admiral (Imp UK) pictured below.

At first Exmoor Kennels were at Rosanna Road, Heidelberg. Later they moved to Silver Street, Eltham which was a very deep block with ample room for spacious kennels in the backyard as was common in those days. I attended Airedale functions held at her home, albeit in the front garden as no one was allowed to see the kennels! Mae did most of her breeding and showing from Eltham. However, her dogs were walked daily around the Eltham streets and Mae did all her own stripping and trimming. In 1962, she bought a bitch called NORA TAKI BUSY BEE which gave her an outcross to Bill Brilliant's RIVERINA GULLIVER and CH BENGAL BOATSWAIN but I cannot find any other evidence of outcrossing. 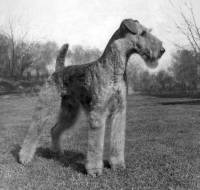 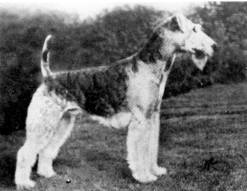 Mae Platts as an Exhibitor/Handler

There are many stories I could tell of 'Mother' Platts as I used to call her in those early days. I well remember when she came to my house for a Meeting and saw all my dogs hand stripped to the skin. A few weeks later as their beautiful new coats were coming through, she saw me at a show and accused me of dying my dogs. I was so angry I approached her and with a raised voice and pointed finger I emphatically stated - probably with an elevated voice that my dogs were all definitely hand stripped. With no defense, she slapped me across my face! Of course in the 1960's this assault went unpunished - it just left me feeling humiliated and mentally hurt.

Her fourth import was Ch JOKYL LEADERS LEGEND (Imp UK)who is pictured above. He was a very tall dog (around 27 inches at the shoulder) but he had a wonderful temperament and was Mae's household pet for over a decade. Her fifth import was Ch BENGAL JEMADER (Imp UK) who was my personal favourite of all her imports.

Showing dogs was Mae Platts passion. She went to every Show regardless. I well remember that Maurice Platts died on a Friday. The very next day one of Victoria's most important Shows of that period was the 'Classic Dog Show' was being held  the next day. Everybody was surprised to see Mae Platts there with at that time her latest import, Ch Bengal Jemader'. She walked around that ring with Jemader in one hand and a box of tissues in the other. Of course Jemader was awarded the top prize of the day, 'Best Exhibit in Show'. Although I personally felt Jemader was her best import and did win other Best Exhibit in Shows in his own right, I felt the circumstances behind this particular win made a mockery out of dog showing.

Unfortunately Jemader was impotent and refused to mate any bitch. Frustrated by this, her sixth import was Ch BENGAL CRUSADER (Imp UK) who had a pale, woolly coat, was very straight in stifle but had a wonderful head which he passed on to his progeny. Better still, he would mate naturally. Then CH BENGAL VALLEY FORGE (Imp UK) was the last Airedale she imported and exhibited. He was a big strong dog who threw some excellent stock. 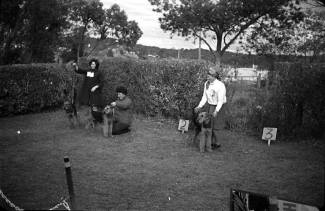 Lily Howlett, myself and Pauline Lewis at 'Exmoor' c 1969

The last picture is of an Airedale Competition at held Exmoor Kennels in Eltham around 1969. From left to right Lily Howlett (Clesha) with her foundation bitch RANGEAIRE SHEBA, myself (Jane Harvey) with RANGEAIRE RANGITAIKI and Pauline Lewis with MOYLARG MINNURANDI.