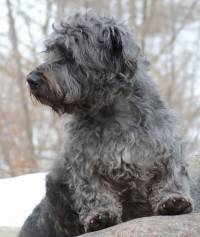 Although rare, the Glen of Imaal is the only short legged breed native to Ireland. Particularly strongly built, he has became famous as the 'Turnspit' dog because he arguably worked in the treadmill of propelling a device which rotated the spit which turned meat as it slowly roasted in the old Irish kitchens.

In 1570, Dr. Johannes Caius called this type of dog the Turnspit in his classification written in Latin and translated into English by A Fleming in 1576 AD[3]. The original translation of this important work is in my opinion too difficult to read to be printed in its original form. So it appears here as my interpretation in modern English.

There is known under the heading of mongrels of the coarsest kind a certain dog excellent for its services in the kitchen. For when any meat is to be roasted, they are put into a wheel which they turn around with the weight of their bodies roasting the meat better than any kitchen maid. We shall call this type of dog the Turnspits. 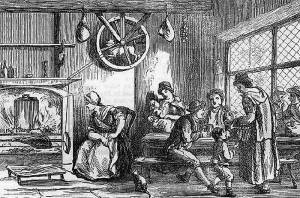 How closely the 'mongrels of the coarsest kind' that Caius described resemble the English drawings like historical one below is unclear. But it is generally accepted that the Glen of Imaal Terrier is the 'turnspit dog' whose function is described below.

The traditional method of roasting poultry and joints of meat was on a horizontal metal rod called a spit stretched across an open fire. As the spit continuously rotated slowly to cook the meat evenly, it required tedious hours of slow turning. So instead of some human servant turning a handle attached to the spit, many kitchens in large homes, hotels and pubs installed dog powered treadmills whose centre was connected by belts and pulleys to the hearth spit. Usually the wheel had four spokes supporting a flat rim, the inside of which became a running track for the dog.

Most turnspit dogs had a distinctive shape with a long body and short legs. They also had to be strongly built because they often turned roasts and hams that could weigh more than 30 pounds.[1] This was a cruel practice with dogs often having to work hours above hot coals without a break. But it was quite usual to work one dog one day and another dog the next. Hence the common English saying: 'Every dog has it's day'.

History of the Glen of Imaal Terrier 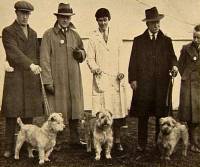 In addition to the description of Turnspit dogs, by 1575, dogs with crooked legs had been described in George Turberville's work 'The Noble Art of Hunting'. He said they were keener to enter badger dens and stay facing the badger longer than any other terrier.

The Glen of Imaal Terrier derived its name from the name Glen (meaning valley) of the Imaal region of the Wicklow Mountains, south of Dublin which was first settled in the 1500's and 1600's. Survival of early settlers in this wild rocky none-too-fertile countryside was dependent on forcing a living from the rocky ground. This required a strong tough dog that would hunt badgers and foxes and keep the rat population to a minimum. So unless a dog unless assisted in the day-to-day struggle for existence, it would not be tolerated[2].

The Glen of Imaal Terrier becomes a Pure Breed 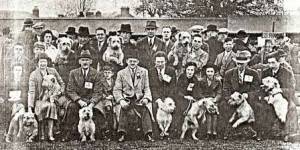 During the 1600s, Oliver Cromwell acting for the English Parliament, hired German and French soldiers to take the Southern part of Ireland from the Irish Catholic farmers. These foreign soldiers were then given the land for their own use. In the absence of any documentation to the contrary, it is likely these European soldiers brought their small hunting dogs with them founding the Glen of Imaal Terrier.

In 1933, the Irish Kennel Club recognised the Glen of Imaal as a pure breed. The picture above on the left was taken in 1933 shortly after recognition. Today, in order to appreciate his physical characteristics, it is important to understand the purposes for which he has been used during the centuries of his development.

The Glen of Imaal Today 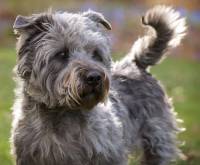 The Glen of Imaal is a short legged terrier so strongly built that his body is not only longer than it is high, the strength in his loins make the topline appear to rise towards his rear. He stands 35 - 36 cm (14 inches) high. His double coat comes in blue, brindle or any shade of wheaten. Unlike any other terrier that was first developed to work within the confines of burrows, he has bowed forelegs with a slight but perceptible bow.

His head is of fair length with a well defined stop and a particularly strong foreface or muzzle housing a normal scissors bite. The eyes are round, of medium size and brown and he has small rose shaped or semi-erect ears. 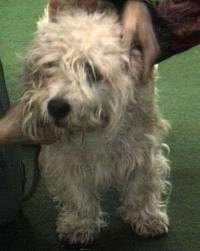 The neck is muscular and of moderate length, his shoulders broad and muscular. The forelegs are well boned and slightly bowed, caused by his deep chest. The ribs are neither flat nor barrel shaped giving his lungs maximum capacity. The body, which is slightly longer than his height at shoulder, should be extremely flexible giving him the ability to wind through narrow badger dens. This, together with the strength in his loin and hindquarters that are particularly well muscled, typically gives him his unusual slight rise in his topline.

The feet are strong and round with the front feet allowed to turn out a little from the pastern as one would expect on legs with a slight bow. The tail is strong at the root, set on high and carried gaily. He moves with a free, ground covering action, with particularly good drive from his strong hindquarters.

[3] Dr John Caius, "Of Englishe Dogges: The Diversities, the Names, the Natures, and the Properties", London, 1576, translated into English by Abraham Fleming, Page 36. The work was originally published in Latin in 1570 as "Johannes Caius, De Canibus Britannicis".