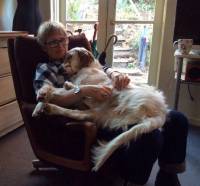 The History of Setters relates how the English Setter is one of the first breeds of Setters to be recognszed as a pure breed. From our earliest dog Shows, his affectionate nature, beauty in the show ring and usefulness in the field kept him in the forefront of the dog world not only in Britain, but also in Australia.

History of the English Setter

The English Setter was derived from the Setting Spaniel of England. Around the mid-1800's when the shotgun was coming into general use, the first recognised dog show was held in Newcastle-on-Tyne England (1859) for Setters and Pointers only. But English Setters were split between 2 main breeders, each with a different type[8]:

I. Mr Edward Laverack Esq (1797-1877) whose dogs were basically showdogs. But his pedigrees go back to 1860, 14 years before the first Kennel Club Stud Book was published.

The English Setter was one of the breeds listed in the First English Stud Book (1859 -1874). By the late 1800's dog shows were becoming increasingly popular. Various outcrosses were made with other Setters and the Pointer. The idea was to produce a 'Laverick' type of showdog that also excelled in the field like the 'Llewellin'. But that seemed an impossible task at all levels: 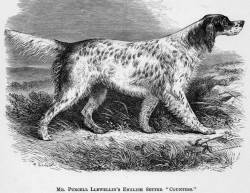 'There are are certainly two schools who officiate as judges at important dog shows, and their decisions are arrived at from standpoints which make them at least perplexing to those who are not intimately connected with both shooting and exhibition life. Those who care nothing about a dog's capabilities as a workman, so long as it answers their own ideal as regards anatomy and coat and, particularly, possess what is known as a 'classical head', are prone to smile at the awards made by some old shooting sportsmen who will insist on giving preference to exhibits who possess the very best body and limbs, making the head something of a secondary consideration'[1]

History of English Setters In Australia 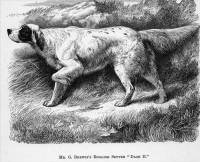 Australia was facing a similar problem to that outlined in the quote above. Our first dog show held in 1864 had a massive 23 English Setters entered[4]. As this show occurred 10 years before the first English Stud Book was published, the names of these 23 exhibits bore no relationship with the 13 that were listed as being imported before 1890, 9 from England and also unusually, 4 America. Of these, the 3 which were listed as Llewellin Setters, were probably for use in the field[5]. One can only imagine how these dogs survived so many months on steam ships!

The British immigrants who developed our fledgling nation spared no expense in bringing out excellent dogs. Additionally we had some amazingly astute breeders who knew just how to use these imported bloodlines wisely. Of particular note is that among the 12 that arrived from England by 1896, 4 were to Mr Morpheth including Richmond (pictured)[2] who was formerly owned by the well known published author Mr Rawdon B Lee. Richmond had already been awarded Champion Setter of any variety for 3 years at Birmingham, England[3] before his importation. He, along with the importations from America as well as others from England, founded a very solid foundation for the breed here and by 1910 an amazing 50 others had been registered. 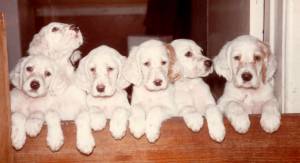 By the 1930's English Setters were well established here both in the field and in the show ring. Sam Shellard who was President of the Sporting Dog Club of Victoria during the Great Depression was prominent at this time. He wrote:

'The importation of beautifully bred, high quality dogs in such a short space of time, made available to local breeders the very best Setter blood of England, and placed the breed at the apex of its fame in this State, putting Victoria in the forefront of all Australian States so far as English Setter breeding is concerned - a pre-eminence which has not been wrested from us ever since, as witness the splendid entry of 50 English Setters at this year's (1934) Royal Show[6] ' 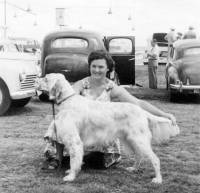 As the dark depression days rolled into years of the Second World War, it was amazing that people's passion for field sports and dog showing continued. After the War, English Setters were given a further boost when Bill Chambers' imported English and South Australian Ch Silver Lining of Ide who won Best Exhibit in Show at the Adelaide Royal in 1950. In 1956 I will never forget the thrill of preparing (all hand stripped) and handling Ch Whernside Wotan through to my first Best in Show.

Many imports were brought into Australia from Britain in the 1960's with the very influential Ch Shiplake Sungold, among them. One of his sons, Ch Zarel Rusty won Best Exhibit in Show at Melbourne Royal 1970 over an entry of 4,228 individual dogs under the famous English Gundog Specialist judge, Mr L.C. (Jimmy) James[7]. So within a century of breeding the English Setter within Australia, a solid foundation of stock had been established, securing the future for generations of breeders to follow.

Basically a white dog, he has a slightly wavy, long and silky coat that is flecked with coloured hairs. Individually, these hairs can be black, orange, lemon or liver or a mixture of two of these colours (tri-coloured) evenly placed throughout his white coat. Peculiar to English Setter, this flecked appearance is called 'belton'. These coloured hairs should never be accumulated into body patches. 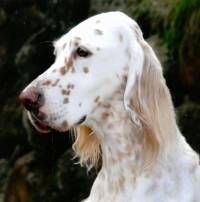 When looking over the skull from the front, it is oval from ear to ear. There is a well defined occiput, a moderate stop and a skull and muzzle that look approximately the same length. From the side, the muzzle should be moderately deep without pendulous flews, and house a normal scissors bite. The nostrils should be large, and the black or liver nose should be in harmony with the coat colour. The oval eyes should be as dark as possible, also depending on the coat colour. The ears are set on low and hang in neat folds. 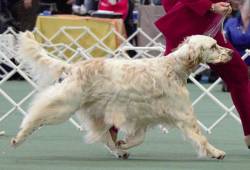 The neck with its clean throat should be of sufficient length to give the dog an elegant appearance yet allow the head to be carried rather high. The forelegs are straight with round bone, the pasterns short and strong with his well padded tight feet and arched toes protected by hair. The body is of moderate length with oblique shoulders, a deep chest and back ribs and a wide, slightly arched loin. The hindquarters are strong and muscular with a good turn of stifle. The tail is set on and carried almost in line with the back. This gives the English Setter a level topline when he is moving with his typically free and graceful action at a trot with balanced reach and drive.

Comparison between the English, Gordon and Irish Setters

[4] Catalogue of the First Exhibition of Sporting & Other Dogs, Thursday & Friday April 7 & 8, 1864 promoted by the Council of the Acclimatisation Society, printed in Melbourne by Mason & Firth, Printers, Flinders Lane West PAges 3, 4.