How Sheep and Cattle Dogs Work

The primary purpose of working dogs is to assist in the management of other domestic species like sheep or cattle, usually kept in herds. The name of a breed in this group does not necessarily reflect its function. Historically a person who looked after a herd was called a 'Shepherd'. But a 'Shepherd Dog' does not necessarily mean a dog that belongs to a shepherd. Nor does it mean a 'sheepdog' or 'cattle dog' works sheep or cattle exclusively. It could work on both of these or in combination with any other domesticated animals for example goats, llama or reindeer. 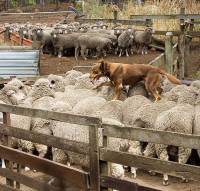 The working breeds in this group may assist by

Alternatively, individual working dogs may perform any combination of the above 3 functions.

The Working Group in this section is confined to the Australian classification (ANKC). In some other countries this is called the 'Pastoral Group'. 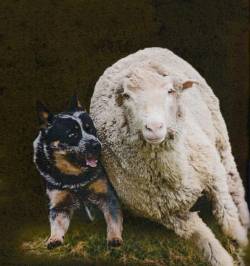 As explained in the history of the Early Herding Dogs, the dog's natural prey instinct of chasing has been modified to herd domesticated farm animals under the direction of a person who is called the Shepherd.

Described in 116BC by the ancient Roman scholar Varro, taking dogs to market could take several days. If this is the case, it is important to feed the dogs en route. Then the dogs do not forage for food along the way or worse, feed on one of the flock. But once the flock has been delivered safely to market, to get the dog to follow the shepherd home, the shepherd should throw the dogs treats like cooked frogs![1] 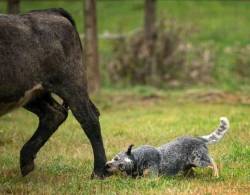 Today, herding dogs should work from outside the flock, often displaying the 'eye'. That could be in front of or behind the flock, circling the livestock, causing them to form a bunch. This makes it easier to protect the animals. It is important the dogs do not divide the flock, except under direction or within the yards.

As pictured, some dogs nip at the heel of an animal being herded to cause it to move. Dogs that do this are called sometimes called 'Heelers'. These dogs are sufficiently clever and agile to protect themselves from a kick. Consequently, when the dog nips the weight bearing limb heel of the animal being herded and then flat immediately afterwards, so the consequent kick from the animal whistles harmlessly over the dog.

As explained in Livestock Guardian Dogs History, these dogs live within the flock and blend permanently with them, bonding with the animals as their social companions. These dogs are usually much larger than predators, their sheer size making it easy to bluff and/or displace predators. The three breeds we shall consider in this group are all basically white with the differences in terrain and climate fixing their type so giving rise to these different breeds.

These dogs instinctively learn to protect the flock from anything they see as a threat, independently of any commands from a Shepherd. This can make them frustratingly difficult to train. Historically, Livestock Guardian Dogs were often the sole protectors of the flock which makes them fearless and free thinking if provoked. However, they are usually calm, placid and instinctively trustworthy with sheep or any other species in their charge.

Please follow these links to the 6 other Livestock Guardian breeds which are recognised in the Utility Group in Australia.