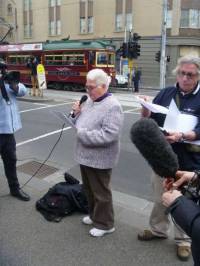 Fellow dog lovers. We are here today to protest against draconian laws that target certain dog breeds. These laws prosecute innocent dogs. This is how they being are enforced.

Imagine! You hear someone knocking on the door of your quiet suburban home. You open it and are shocked to be confronted by Council Animal Officers, with police and Council vehicles parked in your driveway. Your children and your dog run to the door to see what's going on. Then the whole family watches helplessly while your beloved family pet is caught with a noose on the end of a pole and dragged yelping into the back of a Council vehicle. As it drives off, your children are hysterical. After all, your much loved dog has never caused anyone any harm. He sleeps on the children's bed and plays ball in the garden. No, this is not a scene being played out on the TV. This is the real life situation this Restricted Breed Legislation is causing. And it is happening right here in Melbourne and throughout Victoria.

One of the many posters

Legislation enabling this horror scene to occur was promulgated by Minister Peter Walsh. He claims that killing dogs that complied with some arbitrary physical description would keep the community free of this sort of dog. What sort of dog, Mr Walsh? You say if it quacks like a duck it is a duck. Mr Walsh is this the sort of logic on which Restricted Breed Legislation is based? Don't you realize we already have Dangerous Dog Laws in place to deal with dogs that have proved to be a danger to the community? Why don't you police those better?

These Restricted Breed Laws demand that if a dog fits this arbitrary physical description it must be killed. Yet the same Act does not demand that a dog that has bitten someone must be killed. Mr Walsh you have it all wrong. We concede that a dog that has learned bad behaviour from an irresponsible owner may have to pay the ultimate price. So why introduce new Restricted Breed Laws that are based on one type of dog only? After all, any dog can bite!

How can you possibly justify these Restricted Breed Laws that target family pets? Why are you forcing Victorian families to face financial ruin because they have to pay legal costs to defend their beloved pet in the Courts? Not to mention the months of nightmares owners, children and the accused dogs have to go through while these ridiculous laws are being played out in these Courts. Average Victorian families cannot afford actions that might even end in the Supreme Court! Not to mention the waste of rate payers money. 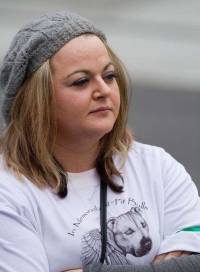 Wherever this Restricted Breed Legislation has been enacted elsewhere in the world it has failed to reduce the incidence of dog bites and has been abandoned.

Mr Walsh, please listen to the position of the RSPCA and the Australian Veterinary Association who are also calling for you to halt these ridiculous laws that cause innocent dogs to be senselessly killed. Instead, please consider a scheme of educating dog owners like the one in Canada. In just 3 years this scheme reduced dog bites in Calgary by 70%. Surely this or some other scheme based on educating dog owners is a far better solution.