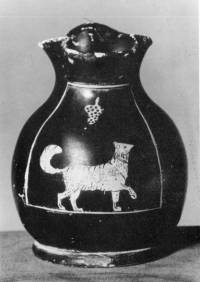 There is much speculation about when where how and why the dog-man bond first began. It could have been up to 40,000 years ago but the first conclusive DNA proof only dates back to 14,000 years to the earliest camp sites. There is no doubt that the earliest domesticated dogs developed alongside a more sedentary lifestyle of humans. As it is generally accepted that there were different 'Cradles of Civilization', this section puts together results of archaeological as well as DNA evidence.

Archaeologists have studied more than 400 camp sites of 'pile dwellers' across Europe, Asia and the Southern Mediterranean. Additionally Peter Savolainen of Sweden and his colleagues put together DNA evidence to prove that dogs were first domesticated in East Asia. Their work was based on work comparing dog and wolf genes from around the world. His report states:

"It is more probable that all the modern types (of dogs) have come from East Asia to Europe than other way around," [2] 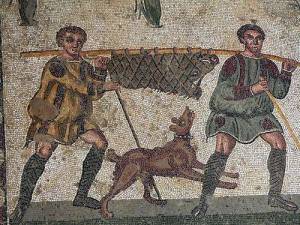 It was to the mutual advantage of both man and dog that such a bond should develop. When humans were hunter-gatherers, both dogs and humans were social animals who hunted in daylight. So when humans began to live in small settlements alongside fertile river flats, wild dogs would have had good reason to benefit from this association. Perhaps man would have developed differently had it not been for the dog-man relationship.

Then humans probably would have begun the dog-man bond we know today by eliminating  from their settlements any dogs who showed aggression towards them. Fossils from this time found skulls of dogs of various sizes which must have lived in close proximity with humans. These fossils also revealed bones of animals killed for human food with marks indicating they had been gnawed in a manner typical of a domestic dog.

Meanwhile the dog had a natural instinct to attach itself to man. There are many anecdotes and stories of what we call faithfulness, some dating back thousands of years.

This particular species of animal feels a natural desire or social inclination towards mankind, an instinct to be useful to man and from spontaneous impulse, attaches himself to him... takes delight in associating with us and sharing our abode. It is he (the dog) who knows us personally, watches over us and warns us of danger... while poverty drives away from us many a companion of our happier hours, it was never known to diminish the love of our quadruped friend.[1]

Domestication into the Different Dog Types

The earliest evidence of the dog-man relationship or dog's domestication as far as different types of dogs are concerned, demonstrates there were four distinct types of dogs that formed bonds with humans. These bonds were a result of assisting man to hunt prey to survive in the geographic location of earliest Cradles of Civilization. These were

So the dog-man bond instinct resulted in producing dogs which looked alike in each of these areas. These different types of dogs formed the basis for today's different breeds. By the end of the next couple of millennia, dogs performed different historic roles which changed according to the particular requirements of man at that time. Today the modern roles our dogs play are vital to our urban society.

[1] William Youatt 'The Dog" published 1848 London Charles Knight Fleet Street (under the Superintendence of the Society for the Diffusion of Useful Knowledge.) Page 8

[2] Peter Savolainen, evolutionary biologist at the Royal Institute of Technology in Stockholm, Sweden, Nature Science Update in the November 22, 2002, issue of the journal Science.