A game terrier with 'an open coat' has been in existence in County Kerry, the South Western region of Ireland since the earliest settlements. Their non-shedding coat was a of black-blue colour and inclined to curl. These dogs were undeniably game, their boundless energy makes them always look alert. As such, make one of today's most successful show dogs. 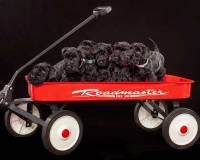 An old Irish fable from the late 1700's, tells of a dark coloured dog that swam ashore from a shipwreck and killed all the male local terriers and mated the bitches. This supposedly produced dogs with dark blue coats. Dismissed as the good story Irish people love to tell, certainly in the old feudal days, peasants were not permitted to hunt with Irish Wolfounds. So, it is reasonable to assume that surreptitious matings occurred between the peasants' Terrier bitches and the rich land owners' Irish Wolfhound dogs. 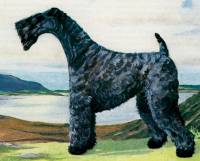 It is also likely that the blue, wheaten and red Irish Terriers came from common stock. Certainly, game terriers whose coat was inclined to curl were known around Waterford in the south-east of Ireland dating back to the old Vikings' days around 900 A.D. Born black, as they mature, they became a bluish-black slate colour. If they had darker blotches and patches with tan about the legs and muzzle, they were called 'Harlequin Terriers'.[1]

Today, the Kerry Blue is born black but as it approaches 18 months of age, it gradually acquires its adult blue colour. The accompanying photo shows 6 Kerry Blues of different ages and various shades of blue. Once a Kerry matures, every shade of blue is equally correct. 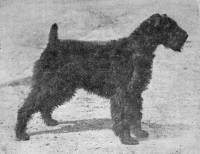 At least one Blue terrier appeared at a Dublin Show in 1876. Also, at Limerick, in 1887 there was a class for Silver-haired Irish Terriers where specimens were of a slate-blue colour. At least 20 were also exhibited in Killarney in 1916. In 1920, without seeking license from the English Kennel Club, a Meeting was called in Dublin for anyone interested in the Irish Blue terrier. Around 30 people attended, including several who were to become leaders of a new Irish Kennel Club. Later that year, the All-Ireland Blue Terrier Club was formed and shortly afterwards the Irish Blue Terrier Club. Both Clubs required the Terrier to hold 'a Certificate of Gameness' before the dog could become a Champion under Irish Kennel Club rules. 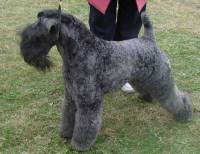 This happened when Ireland was struggling to establish political independence from England. It is amazing that It is amazing that Irishmen were able to put aside their political differences when discussing the Irish Blue Terrier. They even held a dog show without the permission of the English Kennel Club. With their judges appointed from both sides of the political divide, the Irish Blue Terrier Club united Ireland's canine enthusiasts who then formed the Irish Kennel Club.

Although the breed was known for a short time as the Irish Blue Terrier, the Irish enthusiasts decided to give him the 'Kerry' tag despite being also developed in other Irish counties. In the 'Irish Monthly', 1922, he was described: 'His disposition seems nigh faultless, if a slight tendency to diminish the cat population, be accepted'.[2]

The Kerry Blue first appeared at Crufts in 1922 under English Kennel Club rules. Then the Kerry Blue Terrier Club of England was then formed established and the breed standard drawn up. Annual Shows have been held ever since. 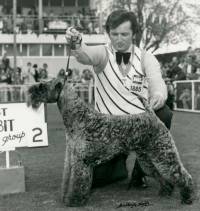 The Kerry Blue was first introduced into South Australia in 1930 by Dr Kyle Gault. In 1952 David Roche also from South Australia put the Kerry Blue on the map in Australia with the importation of Ch. Berenwode outrider (imp UK) and Breezehurst Bokita (imp). They in turn produced Ch Fermoy Foggy Knight who won Best Exhibit in Show at one Adelaide Royal and Best Opposite Sex in Show at another. Always immaculately presented, David and his Kerry Blues dominated the show scene across Australia for the next three decades [3].

At a glance the Kerry Blue and Soft Coated Terrier may look the same breed with just a different coat and colour. But decades of selective breeding to a Breed Standard has now made each of these quite distinct. With their basic construction typical of the long legged terriers, their specific breed characteristics are summarized in the table below: