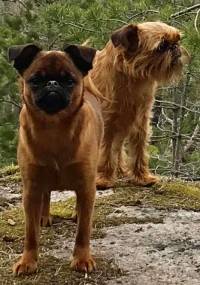 The History of the Griffon Bruxellois 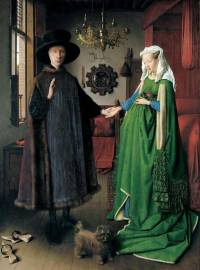 In 1434 AD, the famous Amolfini Portrait (left) featured a small rough haired terrier painted in the Belgium town of Bruges. So a small type of terrier similar to the Griffon Bruxellois we know today, has existed in Belgium for centuries.

But it would be 1880 before somewhat recognisable Griffon Bruxellois made their first recorded appearance. These were a group of 5 small long-haired terriers (under 3 kilograms) which were exhibited at the first all-breeds show held in Brussels to mark the 50th Anniversary of Belgium independence. Two of these were the sire and dam of 'Fox' owned by a coachman named Notermans. 'Fox' became an acknowledged founder of the breed with many pedigrees recording they still go back to him today. 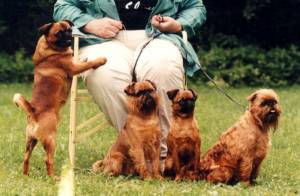 In 1882, the Griffon Bruxellois appeared in the first volume of the Belgium Stud Book as 'small hard coat terriers'. In 1884 and 1885 the name 'Affenpinscher' was added because they had a 'monkey head' similar to the German breed. But by 1886, the 'Affenpinscher' name was dropped, the name 'Griffon Bruxellois - little red-haired Griffon' was created. In 1888 when a Club was formed, the draft Breed Standard was approved with red being the only allowable colour. The following year, the short haired Petit Brabancon was also recognised. By 1905, 'Griffons of all colours' were included under the name of 'Griffon Belge'. But the 'all colours' only included black, black and tan and black and rust, with white being a disqualification[3]. 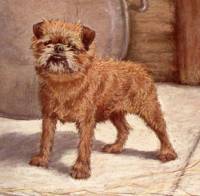 During these early days, the Belgium Queen Marie Henriette was a great supporter of all the Belgium breeds and was undoubtedly responsible for popularising this attractive small hard coated terrier with the monkey face. By this time trade between Belgium and England had already been commonplace for at least a century. So the fame of these little ratting dogs had already spread to the UK where they were instrumental in establishing the Norwich and Norfolk Terriers. In England, progeny of 'Fox' were entered in the 1896 English Stud Book but appeared in the 'Foreign Dog' section until 1899 when they appeared under the separate heading of 'Griffons Bruxellois'.[4] 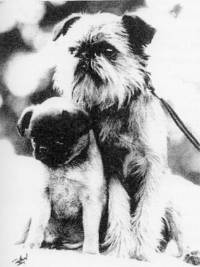 History of Griffon Bruxellois in Australia

In Australia one Griffon Bruxellois and one Petit Brabancon was introduced in 1910 where they were listed separately in Australia's first Stud Book 'Tyzack's Annual'[1]. But it appears that Griffons were not imported into Australia in any numbers until 1933. Significantly, Mrs Elizabeth Collins exhibited her first Griffon, 'Mr Wylde of Moerangi' in 1937 and became very prominent in the Toy Group in Victoria with a trophy awarded in her honour for 'Top Toy' for many years[6]. 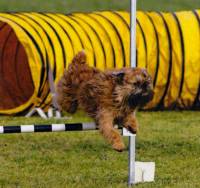 In the 1950's and 1960's Peggy Crawford imported Griffons into NSW, Mr Phil Cunningham to SA, and who could forget that delightful character, Madge Sheehan who imported them into Victoria[2]. Additionally with Australia's easy access to New Zealand where Mollie Grocott brought in a significant number of top winning Griffons from UK, her Moerangi prefix became very well known by the number of quality imports she sent here to Australia. So Griffons of both coats and all colours have always been in excellent hands here as showdogs, pets or participating in action sports like Agility. 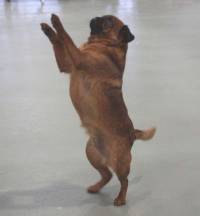 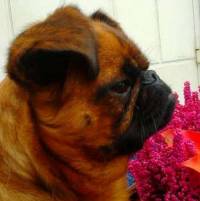 The Griffon is a cobby square little dog with the disposition of a terrier weighing from 3.2-5kgs (7-11 lbs). He has a fairly large rounded head in comparison to the body but the skull should never be domed. He has a definite stop and a relatively short wide muzzle with a prominent turned up chin. This means the mouth is slightly undershot. The eyes are round and the ears should be semi-erect.

He has a short body with a rather wide and deep chest, a level topline and a high set tail. His straight forelegs with medium bone and well muscled hindquarters and short hocks enable him to move freely with good drive from the rear.

Griffons most commonly come clear red with a darker shade on the mask and ears. The Breed Standard is quite specific in that each hair should be an even red from tip to root. But in some countries Griffons that come in black or black and rich tan without white markings are called Griffon Belge.

How the Affenpinscher differs from the Griffon

Because both the Affenpinscher and Griffon should have monkey like expressions, they may look very similar in body proportions and general balance. But the Affenpinscher differs from the Griffon Bruxellois in the following ways: 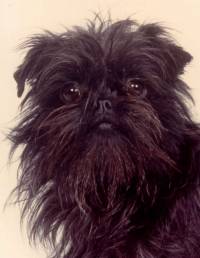 Comparison between Affenpinscher and Griffon Bruxellois