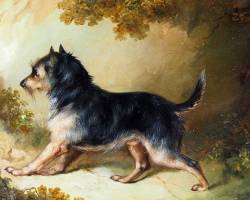 Rough Coated Terrier c 1850Tasmania conducted the first official dog show in 1862, at Moore's Horse Bazaar in Hobart Town. It had a catalogue produced by Hobart Town's 'Society for the Improvement in the Breed of Dogs' which recorded that 92 dogs that were exhibited. The Hobart newspaper reported the purpose of the dog show was

'...to encourage Improvement in the Breed of Dogs, especially in the useful varieties and by inducing people to keep a good dog to lessen, as far as possible, the number of useless curs with which the city is at present infested.[1]

Although other dog shows were held infrequently in Tasmania over the next few decades, probably formulated under the English Kennel Club Rules, for the next 36 years, no other catalogues have so far, come to hand. Although other dog shows were held infrequently in Tasmania over the next few decades, probably formulated under the English Kennel Club Rules, for the next 36 years, no other catalogues have, so far, ever come to hand.

In the early 1800s Hobart Town was not only the capital of Tasmania, it was the second largest city in the Commonwealth. In 1838 in the country city of Campbell Town, the Agricultural Show was founded. At that time, Tasmania's sheep industry was thriving, supplying sufficient sheep to feed not only Tasmania, but the remainder of the Colony of New South Wales as well!

Today, the agriculture world has labelled the Campbell Town Show as 'the longest continually run show in the British Commonwealth'. It runs Tasmania's only Sheep Show where the unrecognised Australian breed, the Smithfield still holds its Annual Show. These 'rough 'Colley type dogs' were so named because, before they came to Australia, they drove flocks of sheep to the 'Smithfield Market' the rail hub in London. Smithfield's were essential to the development of the thriving sheep industry of Tasmania from the early 1800's and beyond.

In 1898, the Southern Tasmanian Kennel Club (STKC) held a Show in the Old Exhibition Building in Hobart, under the Code of Rules set up by the Victorian Poultry and Kennel Club (VP&KC). Competing dogs were registered at the VP&KC office in Melbourne. However, at some stage, the STKC took control of some (but not all) of the Tasmanian affiliated clubs. This enabled Tasmanian exhibitors to compete in more recognised shows in which they could gain Championship titles. In 1916, the Kennel Council of Tasmania was founded.

In 1934 after a breakaway group from the North was formed, the President of the Northern Agricultural Show Council called a Meeting where it was decided that there would be two elected controlling bodies, one for the North and the other for the South. The Northern body went under the original title "The Kennel Council of Tasmania". However, permission had to be obtained for Southern exhibitors to enter Northern shows and vice versa for Northern exhibitors!! A chaotic situation indeed!

Auspices with the Royal Agricultural Society of Tasmania (RAST)

In 1952, it was negotiated to form the Kennel Control Council of Tasmania (KCCT) under the auspices of the RAST. Councillors were appointed from both the National Agricultural and Pastoral Society in Launceston and the Royal Agricultural Society in Hobart. The KCCT published its litter registrations from 1959[4e].