The Pomeranian is one of our oldest and best known pure breeds. Active and alert, they make excellent watch dogs. Developed as a pure breed from the very first dog shows, their lovable, inquisitive nature and good looks has consistently maintained their popularity for over a century. Coming in a wide range of colours, they are a compact intelligent toy breed. They thrive so much on affection that they quickly develop a powerful bond with their human family members. No wonder they are one of the world's most recognizable breeds!

History of the Pomeranian 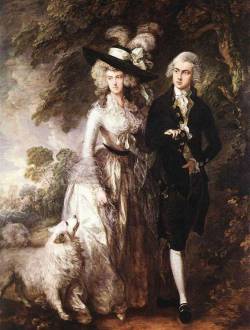 The Pomeranian developed from the "Esquimaux" dog, a medium sized white German Spitz type type of dog. They became known in Britain after 17-year-old Queen Charlotte, wife of England's soon to be crowned King George the Third, brought them England in 1761. Naming them 'Pomeranian', Pomerania being the province of Germany from whence they came, the Queen gave them to several of her peers[5b]. Then Gainsborough famously painted them with the aristocracy, this 1785 painting being one example.

But they really came into their own when dog shows began. The first two dog shows were for gundogs. But at the third and fourth dog shows - Manchester and Birmingham, held in 1861 - a few other breeds were listed. These included the 'Pomeranian Fox Dog', named in the 'Foreign Dogs' section[5].

The Pomeranian Becomes a Pure Breed

By 1862, because of the purported public prejudice against foreign dogs by the general public which remained in place for around 80 years - until well after World War Two[3] Birmingham named these dogs 'Pomeranians'.  Giving them their own section, London followed in 1863. By 1869 'good classes' of these small Spitz dogs were exhibited in Birmingham and London and 1870 seemed a common date when the Pomeranian can be reliably traced back as a pure breed in England[5a].

'This pretty little dog is now very common in this country as a ladies' pet, his pretty white coat and lively manners rendering him a general favourite'[2]. 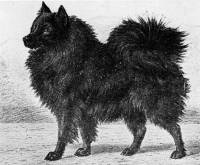 In 1879 the first English Stud book was published, and the first breed description of the Pomeranian was independently written, it described

'a remarkable black or pure flake white coat without any shade or spot of yellow... a red strain in Germany which is unknown in England.... a coat more like fur than hair with a furry undercoat rather than woolly and... obliquely set eyes... [1].

Because of fashionable taste, UK began miniaturizing this German Spitz type of dog through selective breeding. The first Pomeranian Breed Standard written in 1891 states 'they should not exceed 20 pounds in  weight, the smaller specimens being preferable[5] '. 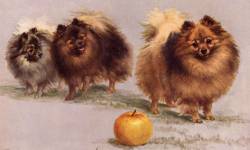 At the Leeds Show that year, a gold medal was awarded to the Best Pomeranian under 10 pounds. Queen Victoria could have influenced this trend around 1888 when she returned from Florence (Italy) where she was attracted by the Volpino Italiano. By 1892 Crufts had restricted their classes for Pomeranians to 7 pounds[5].

History of Pomeranians in Australia 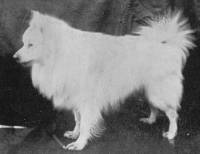 Australia followed Britain as both Pomeranians and dog shows first evolved. The catalogue of the first dog show held in Melbourne in 1864 reveals 2 'Esquimaux dogs'[6] which were probably early Pomeranians as the Breed Standard in Britain was not written until 1891. Despite this, in August 1883, the Victorian Poultry and Dog Society Intercolonial Show held classes for Pomeranian Dogs. But there was still confusion as to whether these were Pomeranians or not because a report from 'the Argus 1888' newspaper of a later Show said "Pomeranians are poorly represented, the winning dog being neither more nor less than a black Esquimaux." 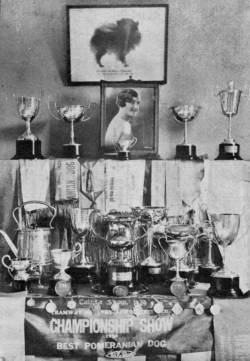 'Tyzack's Annual' was Australia's first attempt at a Stud Book. It reveals that in 1889 Dr Graham imported several Pomeranians. Then Mr Ffench had a dozen from 12 to 16 pounds. Then Lady Davis had two blacks bred by Lord Kintore. From 1893 to 1911, 23 more importations are recorded. An additional 31 are listed in the Stud Book section, more than half of which were bred or owned by Mrs Waters, under the 'Wavenor' prefix[4].

A similar situation occurred across Australia. In the 'Western Australian Times', a Pomeranian Dog was first mentioned in 1875, and another exhibited in Coolgardie, around 1896. In Tasmania the Hobart Kennel Club had classes from 1886. In Queensland a Pomeranian was exhibited at the Gympie Show in September 1891. In Adelaide South Australia, it was 1902 before a Pomeranian made its appearance and in NSW it was 1910 before a dog owned by the late Jack Maude's father was exhibited[7]. 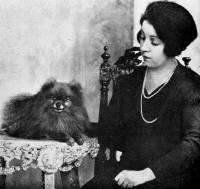 The Pomeranian has remained popular across Australia through the First World War and beyond. By the 1930's Pomeranians were supported by prominent socialites like Mrs Helpmann mother of the famous multi-talented, Sir Robert Helpmann, Mrs Durkin (pictured), Mrs Esler and Mrs Ernest Sandford, formerly the celebrated London dancer, May Till whose trophy table is featured.

Mrs Durkin claims in an advertisement she won 'Best Dog in Show' at the 1931 Royal Melbourne Show, the largest dog show in Australia[8a]. Mrs Esler's advertisement also said she on this award at the 1937 Melbourne Royal. On this very solid footing, Pomeranians have retained their popularity in Australia ever since.

Today, the major differences between the three breeds are:

In summary, the major differences between the three breeds are:

[5] Alan Bendelow, Editor 'A Publication to Commemorate the Centenary of the Pomeranian Club 1891 - 1991' Self-Published Kimbering Pomeranians, Chapter 7 'Development of the Breed Standard' Page 78 - 80

[5a] ibid., Chapter 5 'The Pomeranian in the British Isles from the 18th Century Page 55

[6] Catalogue of the First Exhibition of Sporting & Other Dogs, Thursday & Friday April 7 & 8, 1864 promoted by the Council of the Acclimatisation Society, printed in Melbourne by Mason & Firth, Printers, Flinders Lane West Page 16.

[8a] ibid - This last reference is perplexing as Mrs Durkin claims the judge was Mr Theo Marples, a very famous Englishman who was founding Secretary of the First Pomeranian Club of England. According to his Obituary, Mr Marples was 83 years old when he died on June 7th, 1931 and Melbourne Royal was held in the September of that same year!

[9] Additionally, his obituary does not record him ever judging in Australia. However, the Catalogue of the Royal Melbourne Show 1931 does list him as one of the judges!

Also according to the 1930's catalogues of the Melbourne Royal, only 'Best Dog in Show' and 'Best Bitch in Show' was judged pre-World-War Two. In other words, there does not appear to be any award for 'Best In Show' where the dog and bitch compete.