The Komondor and Kuvasz 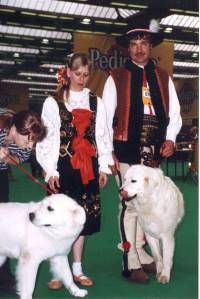 Hungary has two distinctly different breeds of Livestock Guardian Dogs which evolved independently. The Komondor was developed by a race of people called the Cumans who called their dog the 'Kuman-dor'[3]. Meanwhile Hungary was already settled by the Magyars, a different race. For much of Hungary's early history, these two peoples lived in separate areas in Hungary, spoke different languages and so did not mix. So their dogs were never interbred[4]. Today we have the two separate breeds with their coats being their most distinguishing feature.

History of the Komondor 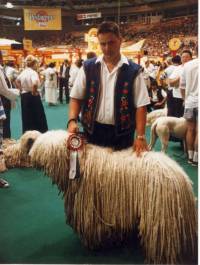 The Komondor belonged to a race of people called the Cumans or Kuns who originated in what is now China and migrated westwards to avoid the unrest happening there at that time. They arrived in Hungary and were allowed to settle, the word 'Kun' or 'Hun' remaining today in many Hungarian place names. There is no doubt that the South Russian (Ukrainian) Sheepdog had an influence on the development of the Komondor's extraordinary coat which in turn has influenced the coat of the sheepdog with which it works, the Puli. 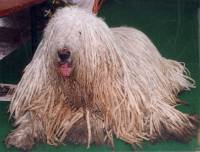 His temperament is typical of a courageous Livestock Guardian Dog and must always be respected despite his outwardly dignified deportment. The Breed Standard describes his courage and suspicious nature in defence of his herds as well as his property and home of his master. Typical of a Livestock Guardian Dog, he attacks silently if necessary, regarding his territory as his own property and will not tolerate any other living creature in it. During the day, he likes to keep a lying position enabling him to control his area. At night, he is always on the move.

History of the Kuvasz

The Kusavz is the Livestock Guardian Dog of another race, the Magyars and has an ancestry quite separate from that of the Komondor. There is a believable theory that the name Kuvasz is as a modern corruption of the name 'Ku Assa', a dog originating from Sumeria (part of ancient Mesopotamia)[1]. 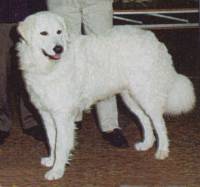 However, there are linguists who dispute this theory and believe the the Magyars' language is more similar to peoples in the East and the fact these names are so similar is merely co-incidental. No matter where the Magyars came from, there is no dispute that the other Livestock Guardian Dog of Hungary the Kuvasz, is the ancestor of many other breeds of white Livestock Guardian Dogs of Asia and Europe with its first Breed Standard dating back to 1883[2]. 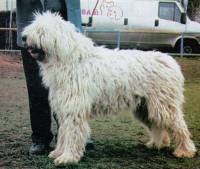 Comparison between the Komondor and Kuvasz

The main difference between these two breeds is the coat. The Kuvasz has a moderately harsh medium length double coat with coarse wavy topcoat and fine downy undercoat which is short on the head, ears, feet and legs with longer feathering on the backs of the legs, ruff and tail. 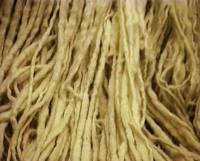 However, the Komondor has a corded coat which develops as the dog matures. It is essentially a double coat, the undercoat and topcoat of which are intertwined into thick dense cords.