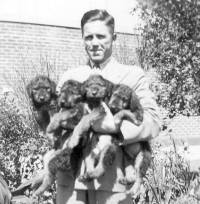 No History of Airedales in South Australia would be complete without the inclusion of Dorothy (Doff) Netherton her ever-supporting husband John and Jimmy Salt, a Scotsman all-breeds judge who trimmed the 'Brentleigh' Airedales. Later in her life another Scotsman, Jim Bathgate assisted her. Dot's kennels were situated in the inner Adelaide suburb of Woodville.

Doff's foundation Airedale was EXMOOR EXTRA a bitch purchased from Exmoor Kennels in Victoria. She then travelled to England and personally selected a lovely dog Ch Chancellor of Siccawei, a son of English Champion Riverina Tweedsbairn who had the distinction of winning Best Exhibit in Show at the world famous Crufts Dog Show - the largest dog show in the world. Accompanying this dog was an Airedale, bitch 'Joy' also from the English Siccawei kennel. I never saw this bitch as unfortunately she was lost overboard en route to Australia by ship which was not unusual for the late 1950's before plane travel became the 'norm'. 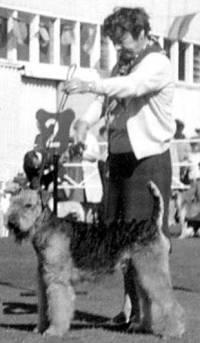 It was quite some time before Doff was able to purchase another bitch for importation to Australia. But this time, she and John traveled to England and personally brought back the beautiful bitch Ch Siccawei Tyffany (Imp UK), a daughter of International Ch Siccawei Artemis. During the long sea voyage Doff and John traveled on the ship with Tyffany in their cabin, exercising her on the deck themselves. They were not going to risk losing another Airedale overboard! 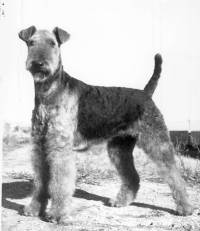 Tyffany's famous International Champion mother had been mated to an unknown brother of the famous Tweedsbairn rather than Tweedsbairn himself. This was probably because at that time Airedales were prone to entropion (a rolling inwards of the eyelids). My foundation stud dog, Ch Brentleigh Ben Nevis C.D. was from Chancellor and Tyffany and although clear of entropion himself, mated to the 'wrong' bitches, he threw it. Fortunately conscientious breeders of the 1960's managed to breed this condition out and today it is quite rare in the breed.

Later Doff and John imported another 'Siccawei' dog, Ch Siccawei Sunday (pictured) also out of Artemis but sired by the famous English Champion Bengal Fastnet. 'Sunny' was a beautiful Airedale despite his coat which was softer than ideal. But certainly I never heard of a case of Sunday throwing entropion.

My bitch, Ch Brentleigh Barbarell was from Ch Siccawei Sunday (Imp UK) and Ch Siccawei Tyffany (Imp UK). Barbarell produced 8 Champions for Rangeaire, including Ch Rangeaire Rebecca (from Brentleigh Ben Nevis) and was the last Airedale to live with Doff in her Woodville home as her constant companion. 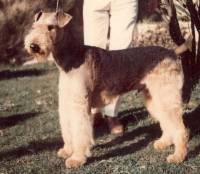 Meanwhile locally, Doff sold another pup 'Mac' as a pet probably from Sunday and Tyffany to a young Scotsman, Jim Bathgate who lived in the picturesque Adelaide Hills. 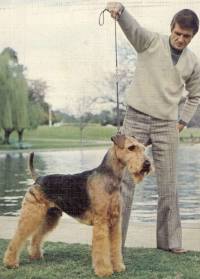 When Doff's lifetime friend Jimmy Salt and her husband John died, she took on Jim Bathgate as a new partner in Brentleigh Kennels.  Then Doff imported Ch Siccawei Kassel (Imp UK) (pictured) and several more Brentleigh Champions were bred under this partnership. This enabled Doff to remain active in the dog world in her senior years. Many Adelaide Dog Clubs benefited from Doff's generous sponsorship during this time. So this happy partnership remained for the rest of both their lives.