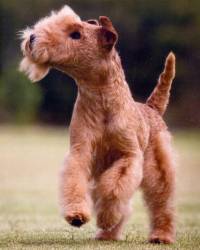 From the 1700s both the Lakeland and the Border Terrier shared the common purpose of fox hunting. A century later, their working heritage was reflected by the opening words written into their respective the Breed Standards. Today, the general appearance of the the Lakeland Terrier still contains the word 'workmanlike'.

History of the Lakeland Terrier

The Lakeland Terrier was first developed to bolt the mountain fox indigenous to the Lakes District of England. Mountain foxes made their homes on the rocky ledges within caves.So, unlike the Border Terrier which worked in soft earth, the Lakeland had to bolt mountain foxes from their unforgiving rocky homes or dens. This required the Lakeland Terrier be sufficiently narrow in the chest to squeeze between the rocks and be able to retreat backwards without becoming jammed. They also had to have the length of leg to jump onto the ledges to bolt the mountain fox from its den[1]. 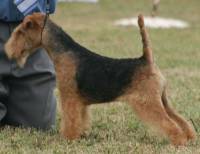 The Lakeland Terrier was first recognized as a Pure Breed in 1928. But today there are still Terriers of the Border Region called Fell and Patterdale Terriers which work in the traditional manner in the Lakes District of England but are not yet recognized by the Kennel Club UK. So, whilst acknowledging these current working types of terriers, in-depth discussion here is confined to the recognized pure breed which is the Lakeland Terrier.

History of Lakeland Terriers in Australia 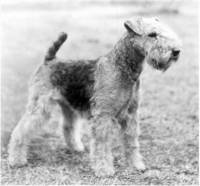 In Australia, a couple of Lakeland Terrierss were imported into Victoria in the late 1940's. Then in 1954 Mr Fell and his daughter Sadie Moorby arrived here from England with the legendary dog 'Jims Swell' (pictured) plus a couple of well-bred bitches from the famous 'Blackwell' kennels in UK. These founded the Manesty Kennels which have had a great influence on the Lakeland Terrier here spanning 60 years. 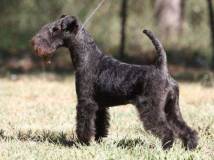 At first glance, a Lakeland Terrier's outline looks like a Fox Terrier (Wire) or a Welsh Terrier (see table below) and built like the long legged terriers. But the Lakeland reflects the colours of other terriers of the Border Region that is blue and tan, red, wheaten, red grizzle, liver, blue and black and black and tan. 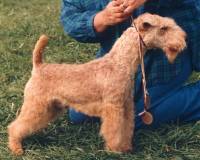 The Breed Standard of the Lakeland Terrier is, in my opinion not sufficiently explicit to reflect these subtle differences. So, the Lakeland is presented here as a comparison with these other two outwardly similar breeds. Note the following features reflect the Lakeland's origin as a Terrier of the Border Region compared to the English origin of the Fox Terrier (Wire) and the Welsh: