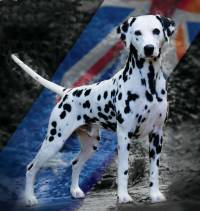 Instead of being bred to perform some specific function, the Dalmatian has been selectively bred because of his distinctive spotted coat. Originally used as part of the ornate equipment that goes with the horse and carriage, he has also been the subject of many fables. The modern classic novel, 'One Hundred and One Dalmatians', originally written in 1956 and its subsequent film adaptations by Walt Disney and others, helped cement its popularity.

History of the Dalmatian

Spotted dogs of all shapes and sizes have been known in various parts of Europe for centuries. The early accompanying image by the Italian artist Aldrovandus (1522-1605) was made public in 1637. So it appears likely that this spotted dog was introduced into England from Italy where he had been described as 'a friend of man since time immemorial'.[1]

But during the Protestant reign of Oliver Cromwell (1643 - 1651), there was so much antagonism in England against the Roman Catholics, anything Italian was deemed politically incorrect. So when this Italian spotted dog was first noticed in England, he was named after the nearby Province of Dalmatia. This appears logical when one considers that during the mid-1600's Italy shared part of its north-east border with Dalmatia, which was just across the Adriatic Sea from Italy. 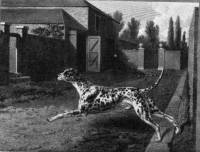 So instead of being labelled as Italian, the British conveniently named the breed after the then Province of Dalmatia which is now called Croatia. To this day, it is still common belief that the Dalmatian's country of origin was Croatia.

The Dalmatian becomes a Pure Breed

By 1792 in Britain, Buffon's book of Natural History, stated that the Dalmatian was previously known as the Bengal Harrier. But claims that he was a useful hunter like the Pointer were largely disproved. Around the same time, in 1790, Berwick believed he was a smaller type of Great Dane and drew accompanying sketch complete with the horse and carriage[2]. Philip Reinagle in 1803 also portrayed him as a large dog in a stable yard.  So the beginnings of the breed we know today as the Dalmatian are as varied as the many fables written about him! 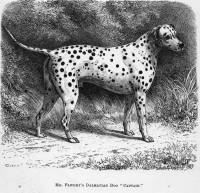 He seems to possess a natural ability to follow, quietly and closely, the horse's heels in a position between the fore-wheels of a carriage or dogcart, never losing the zest to do so[6]. The English rich and famous recognised his natural affinity with horses and used this 'coach dog' as an accessory to the horse and carriage. His natural gait went in unison with that of the trotting horse as

'part of the entourage of smart people about town and is as much a matter of custom as horse-radish is with sirloin steak'.[2]

By this time England had embraced the Dalmatian's distinctive spotted coat so essential to his breed type. He was exhibited at the early English dog shows and was one of the first of our pure breeds to be listed in the First English Stud Book.

History of Dalmatians in Australia 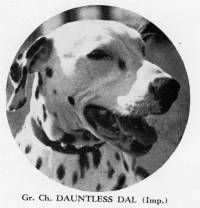 Although most of our pure breeds dogs followed the English, we have only scant information their early days here. Mr Arrowsmith entered Dalmatians in the Sydney Royal from 1900 - 1911 but they do not appear to have continued as a breed[3]. Maybe the attitude towards them in these early times was summed up by this typically Australian quote:

'Dogs degenerate in bad society; thus the coach-dog, living with stablemen, is deficient in sagacity (wisdom), and only fit to follow the rumbling of wheels' (Luttrell's "Living Age" 1849)[4]. 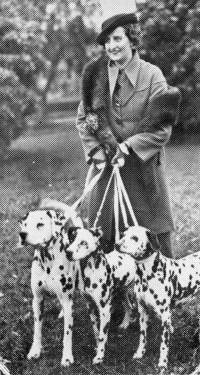 However in 1930 in NSW, Mr and Mrs Hirst established their 'Springmead' kennels with two English imports. At least another 18 arrived during this decade with entries at the NSW Championship Show in 1943 rising to 163[3]. In Victoria, by 1935 Mrs James MacDougall had her 'Korchula' prefix well established with three English imported bitches and the dog, Ch Dauntless Dal (pictured). Additionally Mrs Beckett-Dear (pictured) was breeding under the 'Milden-Hall' prefix[5]. All these have provided a sound basis for Dalmatians which have gone from strength to strength across Australia ever since. 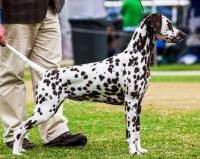 The Dalmatian is a short coated white dog with separate black or liver spots, standing 56-61 cm (22-24 in) tall. He should be balanced and symmetrical in outline, displaying the stamina, strength and musculation to keep up with horses for long periods of time. This makes him appear elegant and free from coarseness and lumber. 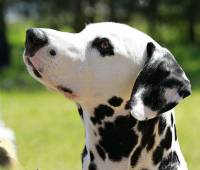 The head should be of fair length with the moderate stop approximately midway between the skull and the muzzle.  The reasonably broad skull should be flat and the stop moderate with the furrow rising up the skull from the stop towards the occiput. So in profile the skull and muzzle have roughly parallel head planes and not be in one straight line. 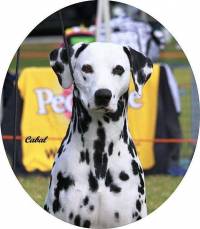 The muzzle should be long and powerful but never snipey and close in a normal scissors bite. The lips should be quite clean with no excess flews, so the whole head is free from wrinkle.The nose should always be black in the black spotted variety, or brown in the liver spotted variety.

The round, medium sized eyes are set moderately well apart. The eyes and rims should be dark in a black spotted dog and amber or brown if the dog has liver spots, but never blue. The moderately fine-textured sized ears are set on fairly high and carried close to head. They are rather wide at the base and gradually taper to a rounded point. There should be at least some white markings on the ears, but spotting is preferred. 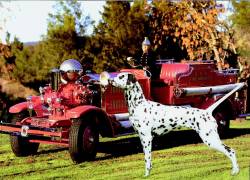 The neck should be fairly long, elegantly arched and free from dewlap. The shoulders should be well laid, clean and muscular, with a well defined wither and the elbow joint working close to the body. The forelegs should perfectly straight with strong round bone down to the feet, with a slight spring at the pastern.The cat-feet should have tough elastic pads, with black or white nails black in the black spotted variety, or brown or white in the liver spotted variety. The chest should be deep and capacious with plenty of lung and heart room but not too wide. The ribs should be well sprung, the back level and the slightly arched loin strong, clean and muscular.

The hindquarters should have rounded, clean muscles with a well developed second thigh, a good turn of stifle and a vertical, short hock. The tail should approximately reach the hocks but in motion is carried in a slight upwards curve and is preferably spotted. The Dalmatian should have a smooth, powerful rhythmic trotting action with balanced reach and drive and a long stride, displaying great freedom of movement. Viewed from behind, the legs should move parallel, the hindlegs tracking the fore.

[1] W. Beilby 'The Dog in Australasia' published George Robertson & Company in 1897 Chapter on 'The Dalmatian or Carriage Dog' quoting from Dr Stables' 'The Dog Owners Annual of 1895' Page 286

[4] 'Tyzack's Annual' Compiled by T. W.Tyzack and C.S.Turner  Published by the Victorian Poultry and Kennel Club 1912 by Bellamine Bros. Printers, 66-70 Flinders Lane Melbourne 'Breeds which have no Registrations of Late Years in Victoria' Page 81

[5] 'KCC of Victoria Annual 'On the Bench and in the Field 1936' published by F C Morant 7 Crimea St St Kilda printed by the Horticultural Press Pty Ltd., 78a Victoria St Melbourne Page 9. Also the 1938 Annual Page 20

[6] J.H.Walsh, under the name 'Stonehenge', 'The Dogs of the British Islands' (Fifth Edition) Published by 'The Field' Office, 346 Strand, W.C.London 1886. Book ll, 'Hounds and their Allies', Chapter ll, 'The Newfoundland, Labrador, St.Bernard and Dalmatian. The Dalmatian Page 207