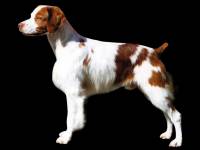 Erroneously called a Brittany Spaniel as a direct translation of its French name, the Epagneul de Bretague, the Brittany is the only Gundog indigenous to France. But the Brittany is not your 'regular' Spaniel. Instead he has high set ears, a comparatively light but cobby build, and is the only Gundog that can be born tailless or with a very short tail. He is included here as a Utility Gundog because of his excellence in pointing, flushing and retrieving game.

History of the Brittany 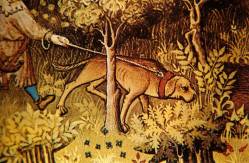 As the Brittany region of Eastern France physically juts out across the bottom of England, it's possible Celtic origin and hence connection with the Welsh Springer Spaniel is logical. French Spaniels were first mentioned in 1387 AD in Gaston Phoebus "Livre de Chasse" (Book of Hunting)[1]. But like the other Utility Gundogs, they really prospered in the late 1800's when guns were coming into their own and the large estates were broken up leaving isolated areas suitable for hunting. By the late 1850's there was clear evidence that local Spaniel and English Setter crosses were used to create a Gundog suitable for this type of cover (undergrowth) superior to either of its ancestors[1].

To this end, John Kemp wrote in his book 'Shooting and Fishing in Lower Brittany' which was published in 1859':

"I have put a Spaniel to a well-bred Setter (English) bitch and been lucky enough to combine the ranging qualities of the latter and the hunting perseverance of the former... my reason for discarding Pointers is, they are too thin skinned for the work required in Landes for partridge shooting, and are of little use, as everyone knows for cover shooting"[1a].

History of the Brittany in Australia

In 1974, Jack Thompson and Ian Waldron imported the first four Brittanys into Australia from France and Holland. They proved the working ability that had been observed at Field Trials in Europe in 1970, was a natural prominent feature of this breed.

So Jack then imported another two bitches and a male of suitable bloodlines from America. By 1977 approximately 1OO puppies had been bred and distributed to New Zealand, Tasmanla, Queensland, New South Wales and South Australia. Popular with rough shooters who used them on duck swamps and quail fields, Brittanys also successfully competed in Field Trials for Utility Gundogs, winning them in a stylish and workmanship manner with high comments from the judge. 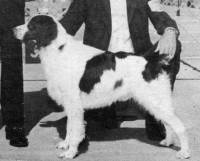 With their scenting ability surpassing 90% of all Utility Gundog breeds, Jack believed the Brittany was the greatest and most gifted finders of game he had ever handled. He considered a Brittany a necessity for the rough shooter who desired an all-round gundog which is biddable, of good temperament, easy to train, and above all, a natural worker in Australian conditions and terrain[2]. 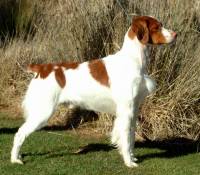 The smallest of the Utility Gundogs, the Brittany is cobby without undue heaviness, hence staying sufficiently elegant. So a short-coupled dog has been sought after and fixed by those who recreated the breed. The Brittany can stand 47 - 50 cms minimum (18.5 - 20.1 ins) tall but ideally is only between 48 to 49 cms (18.9-19.3 ins). Similar to Setters and Spaniels, the coat is short on the head and the front of the limbs which are furnished with abundant feathering. He is commonly white with orange but can have liver or black irregular markings or spots. Roans and piebalds are also common. A narrow blaze is desirable with any coat colour. But self coloured coats are undesirable.

The skull is longer than the muzzle, with a ratio of 3:2. The skull is slightly rounded as seen from the front or the side. The width of the skull is less than its length but the head planes are parallel with a moderate stop between. The muzzle is straight with lateral surfaces practically parallel. So the flews are not large with relatively thin lips which fit tightly so the lower lips are discreetly masked by the upper. 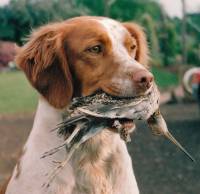 Brittany with a Retrieve

The Brittany has a normal scissors bite. The large nose, coloured to harmonise with the coat, has well-opened nostrils. The skin of the head should be tight, without haw or dewlap so the features of the head look finely chiselled. The eyes are somewhat oval in shape, slightly obliquely set with their colour and that of the eyelids harmonizing with the coat colour. The high set ears are relatively large but rather short, the upper part covered with wavy hair which is somewhat shorter on the tip. But the ears are quite mobile, their upward movement at the base giving rise to the typical Brittany expression. 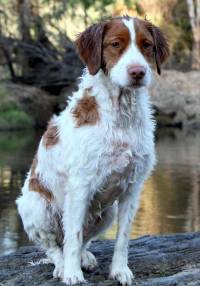 The medium length of neck flows into well laid shoulder blades which are sufficiently sloped to enable galloping. The tips of the blades are about 5cm (2 inches) apart. The upper arm (humerus) is slightly longer than the shoulder blade forming a wide angle (between 115 and 120 degrees) with the shoulder blade.The foreleg is slightly longer again than the upper arm so the elbow joint reaches the sternum and still lie close to the ribcage. The pasterns are flexible and slightly oblique (between 15 and 20 degrees from the vertical) and the forefeet round. 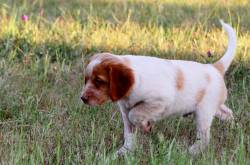 The ribs are well sprung with the rear ribs are long so the abdomen is only slightly tucked up. In profile the withers hardly protrude so the topline is short, straight and level to the broad, muscular loins and high set tail which is carried horizontally. The hip bones are slightly visible but level with the back, so are lower than the withers. The upper and lower thighs have have thick and bulging muscles and the hock should be nearly vertical when viewed in profile. 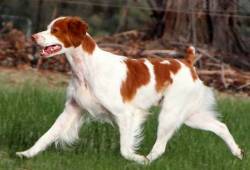 The Brittany's most unique feature is its tail. It can be born tailless, with a very short tail or with a full length tail. In countries where docking is permitted, some with full length tails are docked to between 3 and 6 cm, but not exceeding 10cm.  Whatever its length, it is high set level with the back and carried horizontally and is lively when the dog is attentive or in action. 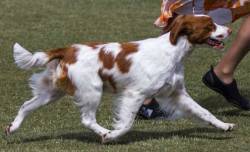 The Brittany moves with easy but powerful, even and lively strides. The legs should move straight without exaggerated bouncing or rolling of the body, with the top line remaining level. The Brittany's skin should be fine, tight fitting and well pigmented. But the coat should is fine but not silky, lying flat on the body or with a slight hint of a wave, but never curly.

[1a] Ibid., Chapter 2 Origin of the Brittany Spaniel Page 19