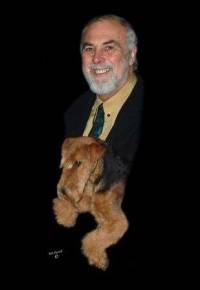 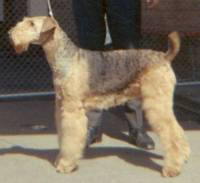 Keith and Trish Lovell commenced a life time love affair in Airedales when they were newlyweds living at Lake Tyers around 1967. At that time this was an aboriginal settlement on the coast around 250 miles from Melbourne where Keith was in charge of the 'Special' School on this remote settlement. Keith was Head Master of this school for Aboriginal pupils and lived on the 'Mission' when they bred their first litter. So it seemed logical that the choice of a kennel prefix should be an indigenous (aboriginal) name. So they choose Tjuringa which means 'something very precious, of religious value and meaning, incorporated the individual's ownership'.

Keith says that this meaning has proved to be relevant to their lives in dogs and that indeed their dogs at Tjuringa! 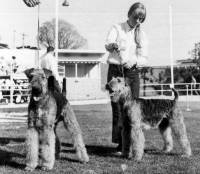 Their first Airedale was Strongfort Samantha Jo, bred by Gesh Lesh. They met me at a Show in Gippsland with poor Samantha Jo just had the hair clipped in a long strip down her back, bathed and with the legs and sides all combed out something like an Afghan Hound. They received some tuition from me and from then a long association began. 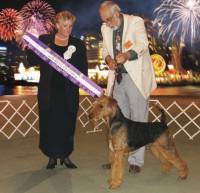 During the period 1970 to 1979 the Lovell's Tjuringa dominated major shows in Victoria. In 1976 at the Airedale Terrier Club of Victoria's Breed Centenary Show which drew 174 entries Ch Tjuringa Harrah won best in show under English breeder of Mynair Airedales, Arthur Lodge. Other successful dogs of that era included Ch Tjuringa Ink, and the Lovell's first import (in partnership with Lorna Schuster and Ann Sorraghan) Ch Loudwell Viewpoint (Imp UK). 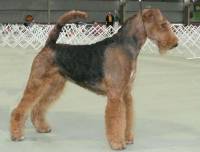 For the next thirty years the Tjuringa name was always a threat in the show ring but didn't return to the heights of the 1970's until the 2000's. Ch Tjuringa Firecracker lifted Tjuringa back into the limelight when he won Best in Show all breeds on a number of occasions but most importantly the Hobart Royal Show. Ch Tjuringa Firecracker (Bang) was also winner of Best in Show at the prestigious breed specialty of The Airedale Terrier Club of Victoria. Since that time Ch Tjuringa Moulten Iron and Ch Tjuringa Razzle Dazzle have been very successful winning breed specialty shows and Ch Tjuringa Romper Stomper was the top Airedale in the breed listing in 2009 and at the end of 2008 the number one Airedale living in Australia. In 2004 the Lovells last import, Ch and Am Ch Matrasen Zamindar (Imp UK) finished the year number one also having won best in shows. 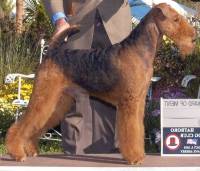 The Tjuringa kennel was responsible for providing foundation or new breeding stock to many kennels in Australia. The Victorian list includes Glenfailte, Ingaloo, Yorkpark, Ayrebury, Airewood, Yellowman, Old Iron and Backaburke and have also exported champions to breeders overseas including New Zealand, Sweden, Finland and USA. Tjuringa have also taken pride in breeding much loved pets for many Australian families. 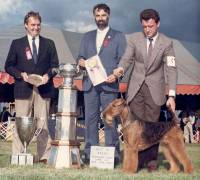 A long string of excellent Airedales have been bred at Tjuringa, including some which have won at a high level. This involvement continues today. Keith is also a well-known Terrier judge, with many prestigious judging appointments under his belt, including the famous Montgomery Kennel Club in USA. More information can be found on his website. Many thanks to Keith for his contribution to this page.