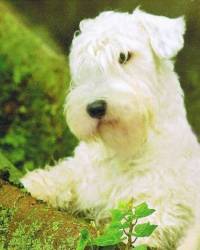 The Sealyham Terrier originated in Wales and is the only English breed of terrier specifically developed to hunt badgers. Because of this specialized purpose, he is a short legged terrier, his body shape being described as oblong. This thick set flexible body that extends between his short straight forelegs gives him this unique oblong outline which makes him distinct amongst the English terrier breeds.

History of the Sealyham Terrier

Jane with her Sealyham 1960

The early development of the Sealyham Terrier was undoubtedly from the old English Terrier (rough coat), together with an admixture of the cattle dog of that time, the 'Corgie' (known today as the Welsh Corgi (Pembroke)). That is why the occasional the wall eye was evident in Sealyhams well into the 1900's [1].

Around 1860, the great terrier man Captain Edwardes kept a distinct strain this terrier at his country estate, Sealyham in Wales. These short-legged terriers would go anywhere and do anything.

The Sealyham is basically a white dog often with head markings. His white colour was his protection from being accidentally shot. After all, white dog can never be mistaken for a fox or otter by either the huntsmen or their hounds! These small terriers were also used extensively to hunt polecats and other vermin that cohabited the badger setts.

"The skin of the badger is very hard and so are its bristles, and it is very difficult for a dog to get hold, except underneath the badger's body, so his job is to hold the fort, keeping on worrying the badger until his voice leads men with spades and tongs to the right spot".[4] 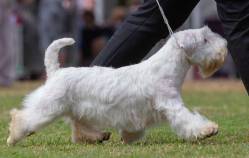 Selection was made not only on character, but also on a perfectly sound construction. THis enabled them to keep pace with the packs of Otterhounds which hunted otter and badger in the rocky environment which surrounded the River Sealy.

The breeding of Captain Edwardes' dogs was continued by his daughter and her husband. In the early part of the 1900's, Captain Jocelyn Lucas continued these original lines with his Ilmer packs of Sealyhams which became legendary. In his rare book written around 1925 Captain Lucas describes how Captain Edwardes used to take two adult terriers on walks, together with young pups. If a youngster ran away from the terriers who were working game, the Captain would shoot the pup. This way he selected puppies with unconditional gameness. It is this strength of character plus his strikingly good looks that lends itself to modern grooming that has endeared them to Sealyham enthusiasts worldwide to this day.

History of Sealyham Terriers in Australia 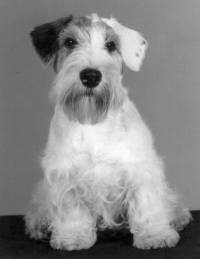 It was reported that "two Sealyham Terriers 'Blazer of Brundall' and 'Bevy of Brundall' with a litter of 6 fine puppies were imported into Victoria by Mr E Cockrill in 1916"[3]. Then  a couple were imported into New South Wales 1929 followed by more into Victoria[2]. From these early bloodlines, Miss Coghlan imported St Margaret Stormer who became a Grand Champion and was a big influence on the breed, my Sealyham pictured above being from her bloodlines. 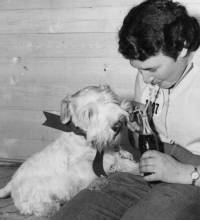 Jane with her Sealyham 1957

Sealyhams in the 1950's were quite popular in Australia, especially down the eastern States where I competed amidst entries at Melbourne Royal of 20 or so,  the attached picture was taken on the bench 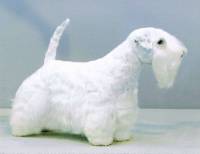 The Sealyham Terrier is a short legged terrier with a deep chest. Uniquely described as having an oblong overall shape, his body has great substance within a small compass. His temperament is always fearless. His is double coated long, hard wiry topcoat has a weather-resistant undercoat. His coat is white but usually has lemon, brown, blue or badger pied markings on head and ears. He should not exceed 12 inches (31 cm) high or weigh more than 20 pounds (9 kilograms). 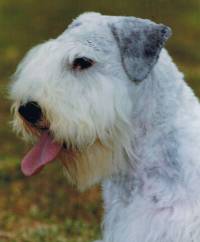 His head is extremely powerful without coarseness or prominence of cheeks. The skull is slightly domed and wide between the ears which allows the topline of the ears to be in line with the topmost part of the skull. The muzzle and jaws are particularly powerful with large teeth that are set square within the jaws in a scissors bite. The medium sized eyes are round, preferably surrounded by black eye rims. The ears are medium sized set on in line with the top of the skull, rounded at the tips with side carriage and a slight lift, but never dropped. The neck is fairly long, sloping into well laid shoulders with a level, flexible back ending in a tail set so high there is still some of dog behind it. 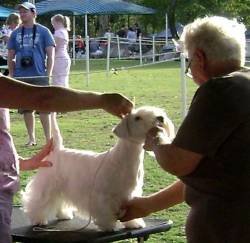 The body of the Sealyham is described as of medium length with well sprung ribs, with a level, flexible back. The Breed Standard asks for a chest well let down between the forelegs. But this depth of chest should not be exaggerated to such an extent that it compromises the shape of the forelegs which are positioned close to the chest wall. So, unless the chest ends just slightly below the elbow, the sturdy forelegs cannot have the required forward facing feet. These feet must be round and catlike with thick pads, the front feet being larger than the hind.

The tail set is high and his strong, muscular hindquarters forming a shelf behind them, completing the outline of this sturdy little dog.