Make room in your heart for the perfect dog - the Irish Terrier! These jaunty debonair daredevils have a deep affection for their master and family and their owners are well rewarded by these intelligent animals' responsiveness and personality. Previously known as 'the Dare Devil', the Irish Terrier has a mind of his own especially when he sees a strange cat, rabbit or potential canine adversary!

Such is the description from a breeder whose Irish Terriers dominated her life[1].

History of the Irish Terrier 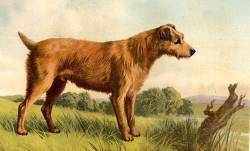 From 1500 AD, Ireland became increasingly populated by peasant farmers, each of whom had a small plot of badly fenced land. By the 1800's potatoes had become their staple diet and families spent their nights gathered around the fire, waiting for their 'murphies' to cook. 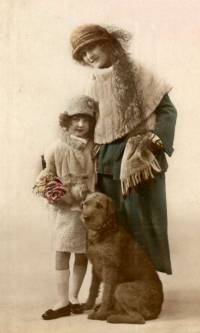 Completing this average family circle was a watch dog which chased away pigs or other animals from neighbouring farms and killed rats either out of necessity or for the sport of ratting.  During the day, these dogs were general farm dogs which were often allowed to lay by the fire. But at night they had to patrol the property and when off duty, had nowhere else to curl up and sleep but in a ditch.[2]

As these terriers effectively ran wild, they were randomly bred. For centuries the hardiest dogs with the most pluck and endurance had the biggest influence on the breed. Hence generations of this life made the Irish Terrier the hardy, robust dog he is today. However, as their background of hardship gave them the temperament which made them famous, should always be respected.

Before the Irish Terrier evolved as a pure breed, Ireland was run as a colony of Great Britain with only wealthy landowners eligible to be their elected representatives. Tenant farmers who were mainly Irish Catholics, were prohibited from owning land. 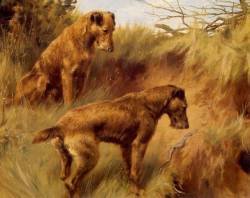 When the potato famine began in 1845, the poor tenant farmers were forced to pay exorbitant rent to the wealthy landowners. To exacerbate matters, England put such a high tariff on grain, alternative foods like corn and bread then became prohibitively expensive. As the dogs' as well as their peasant owners' staple diet was potatoes, more than 1,000,000 people died from starvation. Additionally, more than a million others migrated to other countries to escape the dreadful conditions back home. Of these, many came to Australia accompanied by their beloved Irish Terriers.

Presumably the wealthy land owners left behind also owned them because classes were available in England from 1876. They were the first native Irish breed of Terrier to appear in the English Kennel Club's Stud Book in 1894. So, in a similar way to the Fox Terrier, the Irish Terrier's modern popularity was as a pure breed.

History of Irish Terriers in Australia

When more than 1,000,000 Irish people migrating to other countries to escape the dreadful conditions back home, many came to Australia accompanied by their beloved Irish Terriers. Australia was a particularly attractive destination when gold was discovered in 1851, with 100,000 people arriving in Victoria alone in the next 3 years. 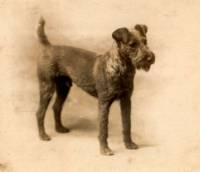 The Irish Terrier 1913 pictured, photographed in Ballarat, was Ch Crow Gill Muddler (Imp UK) who won Best Exhibit in Show at the Ladies' Kennel Club Show in 1911[3] as well as Best of Breed at the Ballarat Kennel Club in 1913. He came from a family of highly priced English bred Irish Terriers demonstrating just how extremely popular they were in Australia in those early years. It is on record that a Show held In 1914 in Victoria conducted by the 'Fox and Irish Terrier Club' drew 400 entries, with another Club, 'the Airedale and Irish Terrier Club' also active in NSW at that time[4].

During the Second World War, activity with many breeds including the Irish Terrier almost ceased. However, by the late 1940's some of the old stalwarts began renewing their passion with a new wave of impressive imports arriving from UK, one of which won Reserve Best in Show at Sydney Royal in 1964.

In true Aussie spirit, our Australian Dog World has been kept alive by many one-eyed passionate breeders and exhibitors, many of whom have never judged a dog show or become what we call today, 'high profile'. Their legacy remains in the form of the Irish Terrier to which they devoted so much of their lives.

The Irish Terrier is a whole coloured red, red wheaten or yellow-red dog without black shading, standing 46 - 48 cm (18 - 19 inches) tall.  He should always be good tempered and alert, displaying evidence of the instinctive pluck embedded in his temperament that has endeared him to enthusiasts for the past century, as a pet, watch dog and pure breed.

The Irish Terrier has a racy but graceful outline, but never cobby. In balance with this overall racy outline, the Irish Terrier has a long and rather narrow head with a flat skull, clean cheeks and a slight but perceptible stop. His long strong foreface or muzzle and almost black tight-fitting lips house a normal scissors bite. His nose should always be black and his small dark eyes and small moderately thin V-shaped high set neat ears that drop forward close to the cheek to complete his alert expression. 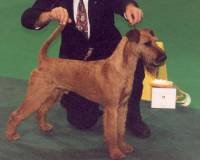 In keeping with the Irish Terrier's racy outline, his neck is fairly long without loose skin or dewlap, running smoothly into the smooth topline created by his well laid back shoulders and muscular strong slightly arched loin. Built with the same basic construction of the long legged terriers, his body is moderately long, his back strong and straight and his chest and ribs deep but not round or wide, so accommodating his terrier front with the elbows working clear of the sides when the dog is either moving or digging. He moves with balanced reach and drive. 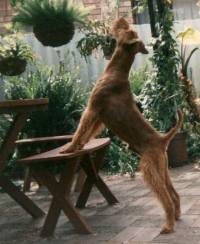 His muscular forelegs are perfectly straight with upright pasterns running into small round feet, preferably with black nails but always with strong pads with never a sign of cracks or imperfections like warts. His hindquarters are also strong and muscular. His high set tail is carried gaily and should be of a thickness to complete the general overall balance of the dog.

The Irish Terrier has a double, or broken coat. His harsh wiry top coat lies flat and is free of silkiness, curl and fringe should never obscure the overall racy outline of the dog. However, as the coat is still a double coat, there is some soft undercoat at the base of the stiff hairs that form the top coat. Although his ears and tail are free of fringe, unusually there is a slight fringe of hair running up the sides of his neck to the corner of his ears.