From a child, Pauline had always had Airedales in her family in UK. When she immigrated to Australia in 1982, she brought brought her foundation bitch, Branstree Bunting (pictured) with her. This bitch was mated to ANDYDALE LORD CASPER which produced her first Champion, CH BEUKALE RYDAL MAJOR. In her own words, this is her story:

Some thirty years before I was born, this wonderful breed was already well established in our family, the Airedales having been in my family for around 90 years. I was born into a farming family in the Lakes district of England. The Airedales were our family dogs and also helped out with various jobs around the farm. They would go up the fells before winter set in and with their wonderful sense of smell, they could find sheep on the crags that the Collies could not locate. 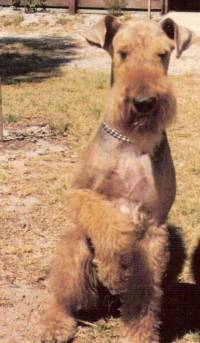 At one time Bracken, my Grandfather's Airedale saved not only the sheep but also my Grandfather. He became lost when a fell mist came down and he couldn't find his way home. The Collie loyally shepherded the sheep but it was the determined Airedale who tracked him back on to the small fell path down to the low fields and eventually towards the farm. My Grandmother told me how worried she was because it was getting dark and she could see a cold mist coming down on the fells, Grandad was not back from bringing the sheep down to low fields for winter. She thought he had been delayed finding the stray sheep which would venture so high on the crags that the dogs could not track them down. Although the Collie and Airedale would track together, it was the Airedale's nose which was the keenest. My uncles who were just young at the time were preparing to go and search for Grandad with lanterns. My Gran feared for their safety as it is a very dangerous place on those fells in such extremely cold conditions. As the boys began to walk across the fields towards the fells they heard the Airedale barking loudly and followed him until they found Grandad, the sheep in bracken near the bottom of the fell. Although Grandad was very cold and exhausted, he was soon safely home with his family. As was common with farm dogs, the Collie and Airedale enjoyed a warm farm kitchen fire with Grandad to warm their bones and they all had a good meal.

As a child I grew up with many farm dogs, gun dogs, and terriers. But Airedale's have always been prominent as both house and work dogs in my family and also my husband's. I learned to walk holding the family Airedale. My uncles took out the terriers and of course the Airedale when they went rabbit catching. My mother-in-law would tell me how their Airedale would take a basket she gave him to the village shop, inside she placed money and a note. He would go in the shop, place the basket on the long wooden counter where the grocer would read the the note, fill the basket and sent him on his way home with the goods.

My mother-in-law said when she was a young mother she would send the dog to bring her children in from the village for their dinner. She would say to the Airedale, go and get whoever she wanted and off the dog went bringing back the children.

Once I was married it was my mother-in-law who reminded me nothing could be better than an Airedale! That Airedale was Branstree Bunting Imp UK who came to Australia with us in March 1982 and was the foundation of my Beukale line. I now have had over 50 Australian champions, two NZ champions, one being a dual NZ and AUS champion.

In the beginning I found a dog in Australia who was a good match for Branstree Bunting. She went back to the Bengal lines which were also prominent in her lines, and a dog I really liked Ch Sicccawei Kings Ransom. I then registered my prefix Beukale, the name of a valley in the Lake District. This union gave my wonderful Ch Beukale Rydal Major who was more than a dog. With his sense of fairness he was named Major because as a little puppy he would defuse any squabbles amongst his litter mates by walking between them. He would look after the smallest and weaker litter mates and did this throughout his life with regards to any animal. Major could not tolerate fools, would save anyone from drowning in the pool whether they liked it or not and was an all-round wonderful showman and companion. 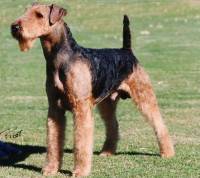 His son Ch Beukale Dalemain Dylon saved the life of a 10-year-old boy who was a competitive swimmer and was swimming in the sea. While in a current, the boy cramped and panicked. Dylon who was swimming not far away knew somehow the boy was in trouble and swam to him, pushed his beautiful head under the boys arm and swam back to the beach with the boy. Without Dylan's instinctive action the boy could have drowned as even his family and friends that were closer than Dylon did not realise the boys plight.

Dylon, Ch Beuakle Allanby Amos, Ch Beukale Angus Askham, Ch Beukale Blencathra, and Ch Buekale Eskett Ebony were from the same litter coming from a union with Major and Carla - Ch Militaire Touch Of Bells Imp NZ, whom I acquired from New Zealand bred by Alice Cottrell. I attained Best In Show, many Best Terrier in Group and various In show awards with these dogs.

Carla's previous litter (she only had two) was a union with a South Australian dog, Goyim Earl Spencer, who had UK bloodlines. He went back to Siccawei Kings Ransom as did Carla. This litter gave me four Champions again attaining many Best In Group and in-show awards with them. Among those who followed were Ch Beukale Penrith Sinclaire, Ch Beukale Reagill Granville, Ch Beukale Flimby Star and Ch Beukale Melbreak Georgie.

One of my proudest moments was Best of Breed and run out for Group, under Airedale breeder and Terrier specialist Mrs Jane Harvey (Rangeaire Fame). Her comments: quality bitch, rock solid temperament, firm top line and tail set. Lottie had great success in the show ring from an early age with Runner Up Best of Breed, Challenge Bitch Perth Royal 2001, many Best of Breed, various class in show and group, Runner Up Best in Group awards, all before Lottie was two years old. Lottie was a combination of my own lines and Carla's two litters. Her sons and grand children have proved excellent both in the show ring and as companions.

Over the years I brought into my lines Ch Militaire Nautical Lady Imp NZ from UK and Swedish lines, Ch FyreoAyre Bra Tac from the UK Stargus lines and Ch Kingaire Quaver Beat whose grand dam was the top winning female in UK, Ch Stagus Athena.

I have enjoyed a wonderful journey with my Airedale's meeting great friends and acquaintances on the way. I strive to maintain brains, strength and soundness together with the typical beauty of the Airedale and I found line breeding to my original lines gave me my ideal Airedale. The Airedale should be able do anything it puts its mind to, its only limitation being the imagination of his owner. If they can convey what they want, the Airedale will carry it out and more! My Airedales have found lost toddlers, saved a boy from drowning, protected their family from intruders and gently soothed the crying baby. There is no dog as loyal, intelligent and courageous as an Airedale! Maybe I am a little biased, although I have known many breeds and cross breeds and I have never wavered from my ideal dog, the Airedale Terrier a King!