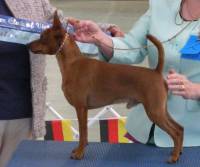 The Miniature Pinscher is the second of the two smooth coated ratting dogs considered here. Unlike the English Toy Terrier, his origins are in Germany.  His precise hackney gait distinguishes him from other breeds. Confusingly, although he may come in black and tan like the English Toy Terrier, he may also come in solid red, black, blue or chocolate. He may also have a docked tail when allowed by law.

History of the Miniature Pinscher 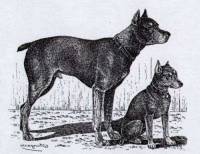 The Reh Pinscher or German Smooth Hair Pinscher was so named around 1500 because it resembled a small red deer found in the forests of Germany. At that time it was described as a 'fairly utility size of breed'. In 1836 the small breed was mentioned for the first time by Dr Reinchenbach who stated:

"the colour was often black and sometimes also black and tan, that he was an agreeable companion, always minded his own business and was a good ratter and rodent hunter". 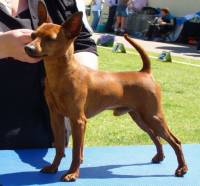 Although dog shows commenced in Germany in 1863, the breeding of the Reh Pinscher did not begin until 1870. By 1878 there was a real differentiation between the larger Pinschers and the smaller ones which were finding favour in the South of Germany.

But by the time the German Pinscher Club was formed in 1895, small dogs were becoming  favoured by ladies as they were elsewhere in the world. However, the Reh Pinscher failed to gain popularity at that time because it was believed that he refused to act like a gentleman, preferring odorous stables and rats and mice to the silken cushion in the great house of his owners! Despite this, the breed flourished and by 1912 at Stuttgart it is recorded that more than 1,000 were present at one particular dog show. As his fame spread outside Germany, he became known as the Miniature Pinscher[1].

History of Miniature Pinschers in Australia 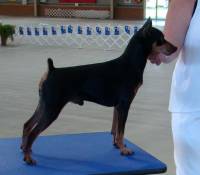 In Australia in 1948, Mr George Byron imported Brazen of Tavey in whelp, the progeny attracting the attention of Mrs Margaret Spira. With the support of her husband Mr Harry Spira, Margaret bought Tasso Little Red Eva and Tasso Simba from Mr Byron, establishing the 'Pindom' kennels in NSW. They imported more dogs and sold the progeny to high profile people such as Frank Longmore and also founded early kennels like 'Minelphi'. Around the same time imports also came into Queensland and, as other imports followed from both UK and USA, a solid foundation for this breed was laid[2]. 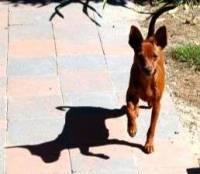 The Miniature Pinscher is a square, elegant smooth coated dog with a precise hackney gait. This gait distinguishes it from any other breed. With its flat skull, the head should look more elongated and narrow than short and round, without excessive cheeks. The muzzle should be the same length as the skull, rather strong, housing a normal scissors bite. The dark eyes should be of medium size and although the ears seen are usually pricked, dropped ears are equally correct.

The neck is strong and graceful, flowing into a straight topline which slopes towards the rear with the tail set continuing the topline but carried a little higher. The forechest is well developed and moderately broad, and the outline completed with a moderately tucked up belly. The forelegs are straight with medium bone, with the elbows working close to the body. The muscular well developed hindquarters with their good sweep of stifle complements the front angulation allowing for the true hackney gait front and back, so typical of this breed.

He comes in solid red but when he is black, blue or chocolate, he has sharply defined tan markings similar to the Manchester Terrier, without the thumb marks. He stands 10 - 12 inches high.