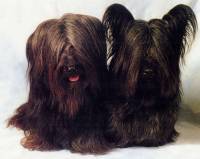 The first Terrier of Scotland to be named in the English Stud Book, the Skye Terrier of today is easily recognized by his glamorous coat. But don't be fooled - they are a one-man dog, suspicious of strangers so must always be approached with caution. Their long body sits on short, strong legs. They come in two different ear types, pricked or dropped, with the pricked being more common.

History of the Skye Terrier

Many believe the Skye is Scotland's oldest Terrier breed. These short-haired terriers have been used for otter drags and fox hunting have been documented on the Isle of Skye off the coast of Scotland since the 1500's. They accompanied hounds, keeping as near to them as their short legs would allow.

After the hounds had driven the fox or otter into their den within the rocks, the terriers were sent in. So, the terrier had to be small and flat in the rib to enable him to successfully undertake these subterranean manœuvres, which he often had to accomplish lying on his side. He must also have courage sufficient to face and kill his quarry, or die in the attempt[1]. 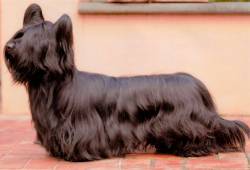 It is well documented that Queen Victoria acquired a Skye on her first visit to Scotland with her husband, Prince Albert in 1842. From then, she owned several Skyes as depicted in various famous paintings, particularly those of Sir Edwin Landseer. This did much to promote the Skye Terrier in England as a companion[2]. 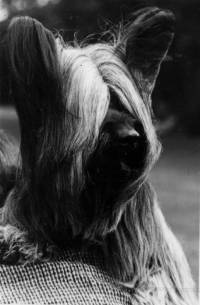 As these Breed Standards differed, it is surprising that correct breed type was ever established! The Scots required a smaller dog, weighing under 20 pounds with the coat no longer than 5.5 inches, and a total body length of 40 inches. However, the English allowed an additional 5 pounds in weight, 44 inches in body length with a coat of 9 inches![1a] 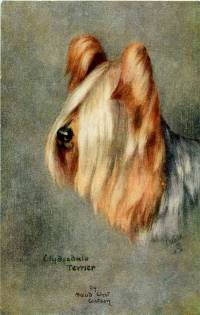 The emergence of the Skye Terriers as a pure breed is complicated by a similar long-haired glamorous breed becoming known in the late 1870's. Called the Clydesdale (or Paisley) Terrier, his appearance was no doubt influenced by the Yorkshire Terrier. These dogs had long, straight, silky body coats without undercoat. They were always steel blue in colour, with the heads, legs and feet a bright rich tan free from dark hairs. Their demise was due to their terrier-like attitude, combined with a coat that was too difficult to maintain[1b]. It was also stated:

Essentially a ladies' companion and pet, the Anglo-Saxon does not look for or appreciate anything effeminate coming from the land of the hardy Celts!

History of Skye Terriers in Australia 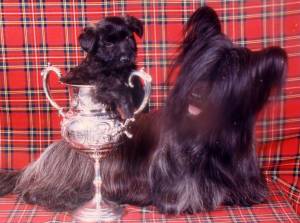 Skye Terriers were first imported into Melbourne in 1880 with 29 Skyes (Prick-Eared) and three Skyes (Drop-Eared) arriving here by 1911[3]. That year the cup pictured was awarded to the Best of Breed Drop eared Skye owned by G S Sanderson in Tasmania for a dog called 'Agrippa Dunskye'[3]. But Skyes died out here after that until the 1960's.

Then the late Maureen Cartledge began breeding Skyes under the 'Santlin' prefix. Her first dog was 'Dane Hills Jock', bred by Mrs McGlyn of NSW. He was the son of 2 English imports, Ch Rhoseigr Blond Ever out of Merry Mount Only Wait. Since then, Santlin Skyes have produced a myriad of big winning Champion Skye Terriers across Australia spanning 6 decades[5].