When Dogs Queensland was the Kennel Association of Queensland, they made a ground-breaking contribution to our dog world when they produced Australia's first series of Stud Books. Called the 'Canine Stud Books of Australia' these books were published annually from 1922-1947. As the only surviving source of  pedigree information of dogs of that time resident in Queensland and beyond, today they are rare and valuable.

In 1897 the first show in Queensland was conducted using the Rules of the Victorian Poultry and Dog Club[4d]. Probably other Shows were also held before the Queensland Kennel Association was formed. In 1921 this Association began putting together the first Stud Books to be produced in Australia with registrations accepted from NSW, Victoria, SA and Tasmania.

Queensland is a very large State with Cairns in North Queensland situated some 1,700 km (1,000 miles) from the capital, Brisbane. The cities of Townsville and Mackay lie in between. During the 1930s all three held their own dog shows. In 1932 the Cairns and District Kennel Club formed. Its aim was to foster the general improvement of dogs and dog shows, and to keep a proper register and Stud Book. In 1948, it became an affiliate of the Kennel Club of Queensland[2]..As a different Club, the Cairns City Kennel Club was later established in 1952[3]. To this day they, as well as some other affiliates run their Shows on grounds leased from the Cairns Agricultural Society.

Before 1947, Queensland had three separate controlling bodies, each affiliating smaller bodies like breed Speciality breed Clubs and country Agricultural Societies. Each registered their own dogs, each licensed their own judges, and each maintained their own memberships and registrations. With paid clerical staff assisted by volunteers, this clearly unworkable situation lasted through the 1930s and 1940s.

Consequently, until 1948, Queensland also had three separate controlling bodies. These were: 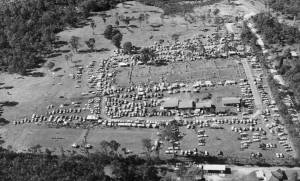 Meanwhile, in 1979, Mr Lyle Gearside, a prominent CCC Councillor, found 52 acres of suitable land at a suitable price in  Durack, a suburb of Queensland's capital city, Brisbane. The only problem was it was within the Brisbane City's 'Green belt' which meant it could only be used for 300 days a year! This amazing condition was eventually resolved and today, the CCC ground at Durack has become an enviable venue for the various activities conducted by what now trades as Dogs Queensland.

[4b] Ibid., The Canine Control Council, Queensland by D.W.Armstrong Pages 73-75.