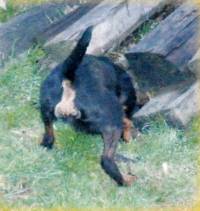 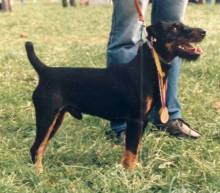 Comparable with the working strain of the Old English White Terrier that was retained by the Reverend Jack Russell in UK, the Old English Black and Tan Terrier was developed into various breeds of working terriers in UK as well as the German Hunting Terrier of Germany. 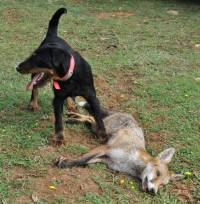 In the 1800's the Old English White and Old English Black and Tan Terriers were similar in size and shape. Their coat type ranged from smooth through to rough. Today, some black and tan terriers are still used for hunting purposes. These dogs look similar to those that historically used to hunt in parts of England and Wales.

In Germany after the First World War, a group of active huntsmen separated from the numerically strong show orientated Fox-Terrier Club. It was the huntsmen's aim to create a breed, the sole purpose of which would be concentrated on hunting performance. 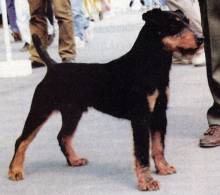 Experienced hunters and cynologists (scientists who study domestic dogs) Rudolf Friess, Walter Zangenberg and Carl-Erich Grünewald decided to develop a black and tan terrier especially suitable to hunt underground. In support of their efforts, zoo director, Lutz Heck from Hagenberg presented Walter with four black and tan terriers which were said to come from lines registered with the English Kennel Club. Their coats ranged from smooth through to rough. These dogs became the foundation stock of the German Hunting Terrier.

Then Dr Herbert Lackner joined the founders. Many years of intensive research followed. Finally, through skilful crossings back to the Old English Black and Tan Terrier (re-named the Welsh Terrier in 1888), they succeeded in fixing the character and appearance of their breed.

The German Hunting Terrier Club (Deutscher Jagdterrier-Club e.V.) was founded in 1926. The founders of the breed put great emphasis in breeding the multi-talented, trainable, tongue-giving, water-happy breed with an explicit hunting instinct. Since then, breeders have continued to carefully select the German Hunting Terrier for its usefulness as a hunting dog, with steadiness of character, courage and drive[1]. 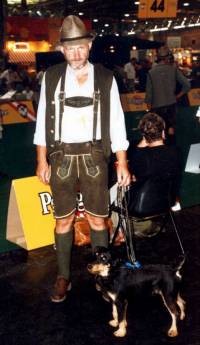 The German Hunting Terrier has a body significantly longer than its height at withers. He stands 33 to 40 cms tall, weighing from 7.5 to 10 kg in working condition. Although his chest is deeper than his height, being a working terrier, the chest should be flexible. So, like the judging of any working terrier, when judging this breed experienced show judges should always span the terrier. 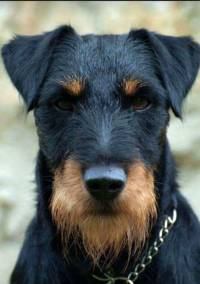 He has a slightly wedge-shaped head with an exceptionally strong muzzle containing the full complement of 42 large teeth. His skull is broad and flat and slightly longer than his muzzle with a slight stop between. His high set (button) ears are carried neatly close to his head.

He has a rough dense coat which, like the Jack Russell can vary in length from smooth through to rough. The coat is usually black, but can also be dark brown or greyish black, with clearly defined fawn or yellow-red markings in the usual back-and-tan coat pattern.