The Pointer is one of our most recognisable Gundogs. His unique head with its slight depression under the eyes, makes his large large nose look slightly upturned. As a working dog he has the ability to freeze, a trait that was necessary for shooting with  primitive guns. Today his graceful symmetry and athleticism makes him a stylish show dog.

History of the Pointer

When guns were first invented, it took a finite time to load them before they could be aimed and fired. So a dog was sought that would stand perfectly still, pointing at the game for long periods while the shooter loaded this primitive, cumbersome weapon. Singularly, Spain produced such a dog, the Spanish Pointer. From him Britain developed the modern Pointer (English) we know today.

A 'Freeze' or state of Catalepsy

Towards the end of the 1600's, early shot guns were coming into general use not only in wars, but also for shooting game, particularly birds. Then the Spanish Pointer became well-known as possessing a trait essential for shooting game with these early guns. Once this dog found game, he had the amazing ability to freeze for long periods of time. This 'freeze' or 'state of catalepsy' is muscular rigidity or fixity of posture. In 1879, 'Stonehenge' described it as follows: 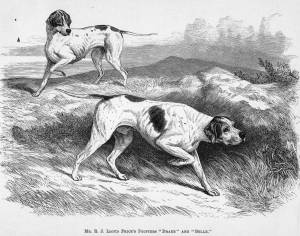 Upwards of 40 years ago, I saw six brace (two) of Pointers taken out by Lord Foley's keeper in Worcestershire, all of which pointed and backed on the slightest indication of scent, showing a genuine catalepsy.... These dogs would remain on point till exhausted by want of food; but I question whether in these days any breed could be found in which a single specimen of it could be depended on to stand even for half an hour. At that time I have seen one Pointer remain standing for six hours at least. I left him standing without his master, and found him there as I left him more than six hours afterwards on my return along the same road[1].

To understand why early Gundogs, particularly Pointers had to have this ability to freeze, it is necessary to understand the mechanism of these early guns. 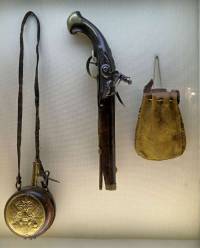 The complete charge that the Muzzle Loader fired was made up of four components each of which had to be separately jammed down the barrel or muzzle of the shot gun with a ramming rod. Three of these components were gun powder, small balls or projectiles and wadding to hold it all together. To avoid accidents, the 4th  component, fine gunpowder was carried to where the gun was being loaded in a separate flask or bag such as those illustrated. 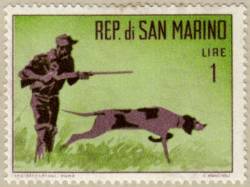 When the dog froze on point the first 3 of these components would be loaded and compressed tightly into the muzzle of the gun. Then very fine gunpowder was carefully placed so it made contact with a trigger mechanism that produced sparks. When the gun's trigger was pulled, sparks ignited the fine gunpowder which in turn exploded the main gunpowder causing the ejection of the everything that had been rammed down the muzzle of the gun. These would come out in a cone of projectiles instead of the single bullet we know today.

The Pointer becomes a Pure Breed 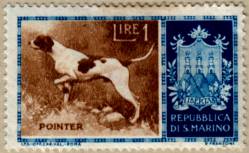 In England, once the Spanish Pointer arrived several other breeds were used in the manufacture of the Pointer (English) we know today. As fox hunting was also popular at that time, it is believable that Foxhound could have been used. By the mid-1800's when dog shows commenced, a dog that could succeed in field trials as well as the possess the elegance to successfully compete in dog shows, was sought. So efforts were made to refine the Pointer.

Additionally as so much emphasis was placed on the Pointer's ability to find body scent in the air rather than foot scent on the ground, the somewhat concave muzzle pointing upwards came into vogue which is commonly called the Arkwright head after the prominent breeder who promoted it. To this day, the slightly dish-faced muzzle originally developed for scenting the air, remains the hallmark of the Pointer (English).

'Idestone' (1872) also describes the Pointer's ability to become cataleptic even when backing another dog that is pointing game. Then this description follows: 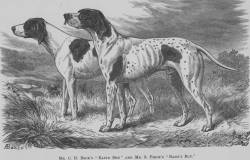 His airy gallop, his lashing stern, his fine range, his magnificent dead stop on game, his rapid turn to catch the wind of body scent, his perseverance under a trying sun to reach a faint and hardly perceptible strain of game borne to him on the breeze; his glorious attitude as he becomes (directly his widespread nostrils assure him he is right) stiff and motionless, with his limbs widespread and head aloft, and stern high held, and his implicit obedience to the lessons he learnt perhaps two or three seasons past - all these wonderful gifts put him on a level with that paragon of Hounds with which he claims relationship[2].

History of Pointers in Australia

26 Pointers (English) competed at the first dog show held in Melbourne in April 1864[3] and have been popular here ever since. From 1879 to 1909 another 16 imports are recorded in Tyzack's Annual plus another 60 listed in the stud section[4]. 'Heather Pardon' whose 7 generation pedigree appears in Beilby's 'The Dog in Australasia'[5], seems to be among the handful of Pointers (English) whose pedigree was verifiable.

So, it appears many of these early dogs owe their claim to fame and popularity to being functional field dogs. But testament to this usefulness in the field as well as beauty in the dog show ring remains proven by Pointers (English) being the subject of numerous Australian dog publications spanning the period since the beginning of the history of pedigree dogs in this country. Today there are still many beautiful show dogs which grace our show rings, keeping the Pointer (English) to the forefront throughout Australia. 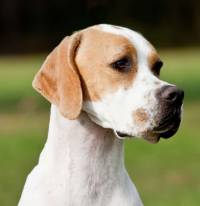 The Pointer's symmetrical outline is a series of graceful curves with a uniquely distinctive slightly dish-faced muzzle. He stands 61 - 69 cms (24-27 inches) high and although his short coat is usually white with orange, lemon, liver or black patches, tri-colour and self-colours are also correct. 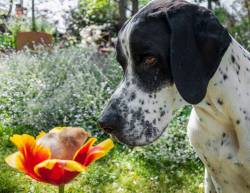 His skull is of medium breadth with a prominent occipital bone, but flat cheeks bones. It is about the same length as the muzzle with a well-defined stop. The eyes also placed midway between the skull and muzzle. The slight depression under the eyes combined with his large nose with particularly wide nostrils, causes the muzzle to look somewhat concave or slightly dish-faced despite it housing a normal scissors bite.

His nose and eye rims should be a dark colour but these may be lighter if the dog is white or has lemon colouring. His expression is completed by his eye colour which should also blend with the colour of his coat. But the eyes should not be bold or staring, nor should they look straight down the nose. The medium length, slightly pointed ears are high set close to the head and should have thin leathers so they will not bleed profusely if damaged when the dog is working among brambles. 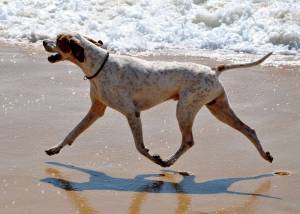 The neck is long, clean and muscular and flows gracefully into well laid shoulders. The chest is sufficiently wide to house the heart with the brisket reaching the elbows and the ribs well sprung. The forelegs are straight with oval bone, slightly sloping pasterns and oval feet with arched, well cushioned toes. Unusually, the Breed Standard makes special mention that the back sinews of the front legs must be strong and visible. The ribcage is long and when the dog is viewed in profile, which gives a graceful curve to the underline. 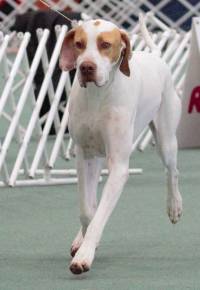 The topline ends with slightly arched loins and haunch bones which, although well-spaced and clearly visible, should not break the line of the back when the dog is viewed in profile. The hindquarters should be very muscular, with well-developed first and second thighs and short rear pasterns or hocks. 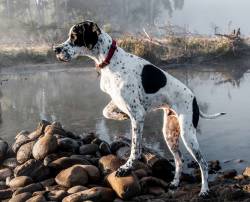 The tail which lashes from side to side when the dog is moving, is very important as it is the reason why the breed became known as 'the Pointer'. Set on and carried on a level with the back it should always be covered with hair. The tail should be of medium length, thick at the root, tapering to a point with no upward curl. When moving, the Pointer is quite spectacular as it uses its hindquarters to drive from behind with its smooth ground covering gait and lashing tail.

[3] Catalogue of the First Exhibition of Sporting & Other Dogs, Thursday & Friday April 7 & 8, 1864 promoted by the Council of the Acclimatisation Society, printed in Melbourne by Mason & Firth, Printers, Flinders Lane West Pages 3, 4.