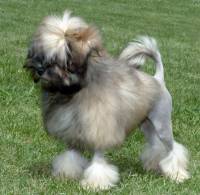 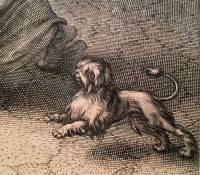 With Buddhism and Lamaism came trade between Ancient China and Tibet. This developed despite the 10-month 2,000 mile journey between these two countries. But well before the birth of Christ, the Silk Road had already connected the Chinese cradle of civilization in the East to the Roman and Greek cradles of civilization in the West. This East-West Trade really flourished with the growth of the Mongolian Empire and its ruler Kublai Khan. By 1270 AD Mongolian emperors of the East were also welcoming Western traders. Mongolians and Chinese exchanged their silk for the medicines, perfumes, spices and the precious stones of Greeks and Romans. Also Mongolian and Chinese Emperors often also traded their small 'Lion Dogs' dogs and sent them back as presents for the Greek and Roman nobility[1].

Although trade along the hazardous Silk Road had decreased by the 14th Century because sea had become a preferred means of travel, all types of trade between China and Greece and Italy was already well established. It was this influence of China which was so significant in influencing the development of the 'Little Lion Dog' the size which becomes obvious when one compares it to the quill and inkwell next to it in the picture on the left.

The 'Little Lion Dog' evolves as a Definite Type 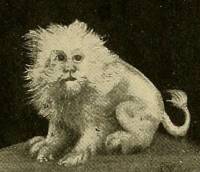 In his 1583 AD work 'Drawings of Nepalese Animals', Englishman Brian Hodgson named these little Lion Dogs 'shock dogs'. Several other English artists of that time also named Little Lion Dogs from Tibet, Nepal and China 'shock dogs' like the one on the left drawn by Lady Newton in 1619. It is from a portrait of Dorothy Brereton, the second wife of Sir Peter Leigh of Lyme[1b].

Early representations of little Lion Dogs of China and Tibet suggest they naturally grew less hair on their hindquarters. But long hair covered their faces. The Eunuchs who bred these 'shock dogs' were not allowed fix their gaze on visitors who were welcomed into the Palaces by the Emperors[1a]. So it is understandable that the 'shock dogs' they bred also had their faces covered, albeit with hair! This would have been typical of the quaint superstitions that surrounded the religions of Lamaism and Buddhism of that time!

The Lowchen becomes a Pure Breed 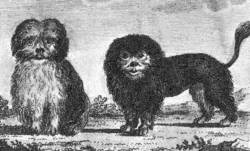 Soon these little dogs would become known in Western countries like Germany and France as a separate Bichon variety. Significantly, during the second half of the 1700's, the respected French naturalist Georges Buffon drew the Bichon and Little Lion-Dog as two separate breeds and named the latter 'Petit Chien Lion'.

In the first half of the 1900's, various respected writers made vague mentions of a 'Little Lion Dog' without any detailed descriptions, drawings or photographs. Early imports came into England from Germany hence the name 'Löwchen' from the German word 'Löwe' meaning 'Lion'. Although this was long before the Löwchen was recognized as a pure breed or appeared in any Stud Books, this name has stuck ever since. 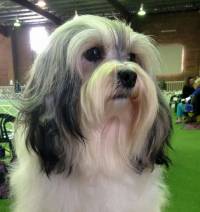 In Brussels, Belgium Madame Bennert kept the Löwchen breed alive during World War Two. After the War, a search began for typical specimens. So Madame Bennert passed her stock on to Dr Hans Von Rickart of Germany. He sent what is considered to be the foundation of the modern Löwchen breed to England. By 1969 the Guinness Book of Records, an English concept which itself was in its infancy, acknowledged the existence of the Löwchen and named it 'the rarest breed in the world'. Progress was slow because, it would be 1976 before the Löwchen was recognised as a pure breed by the Kennel Club (UK)[2]. 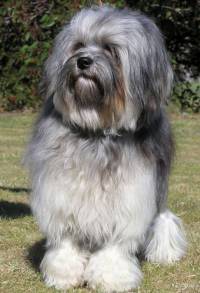 History of Löwchen in Australia

Consistent with the development of other pure breeds in Australia, we followed England. In 1976, Rosemarye D'agostin (now Pia Kirke) brought the first three Löwchens into Australia one of which was Jilland Double Diamente who is considered to be the founder of Löwchens in Australia[3].

This inspired Charmaine Lee the owner of a second Lowchen and half sister to the first one, Rondaglen My Fair Lady UD, to be trained and trialled to the same high level. Meanwhile her breeders, Ron and Joan Harrison from Bunyip in country Victoria, proudly encouraged them!

These two little Lowchen certainly demonstrated that Toy breeds can be trained to compete in the highest levels of Obedience just as successfully as the more conventional larger breeds.

The Lowchen certainly gives appearance of a little lion when the coat clipped in traditional lion clip with its tail topped a plume. But he is a strongly built little dog standing 25-33 cm (10-13 ins) at withers. He can come in every colour or combination of colours except merle. 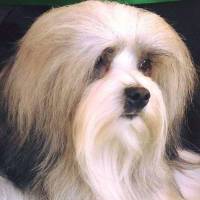 He carries his head proud and high. The flat skull is short fairly broad between the ears, the stop well defined and the muzzle is short and strong and houses a normal scissors bite. The dark eyes are relatively large and the unbroken pigmentation surrounding eye rims should complement the coat colour. His dropped ears should be of moderate length with long fringing.

The neck should be of good length and proudly arched. The well laid shoulders and the forelegs should be straight with strong, round bone ending in small, round feet. The short, strong well proportioned body has well sprung ribs. In profile the topline should be level and the tuck up moderate. The loins are strong, the hind legs well-muscled and the turn of stifle should be moderate without being exaggerated. 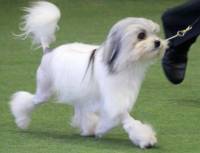 The tail is of medium length and carried gaily on the move. Typically it is clipped with tuft of hair on the end to resemble a plume. At a trot he moves with a free, parallel movement for and aft with balanced reach and drive. He has a single silky, rather than a double coat which is fairly long and wavy, but never curly. For exhibition, the coat should be presented In its natural state without scissoring or sculpting, apart from the traditional lion clip.