The Irish Terrier played an important part in Australia's history. In particular, two individual Irish Terriers have become iconic in Victoria. The first became famous for his extreme dedication to his master in 1854 during the 'Eureka Stockade' and the second became famous in the early 1900's for the courage he displayed during the Boer War. 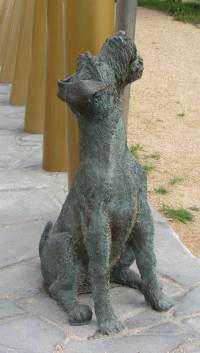 The first iconic Irish Terrier was 'Wee Jock', known as the 'The Pikeman's Dog'. 'The Pikeman' was one of the heroes at the Eureka Stockade on December 13th 1864 when 5 British soldiers and 22 miners famously were killed. 'Wee Jock' guarded the Pikeman's body when it remained unclaimed on the bloody battlefield. Later the dog accompanied the 'death cart' as the bodies were taken to the cemetery. According to reports, Wee Jock' howled continuously and refused to be separated from his master's body.

Today, 'Wee Jock's' statue is situated at the apex of the 'V' shaped monument, the 'V' representing victory. This monument stands on the high ground outside the Museum of Australian Democracy in Eureka Street, Ballarat, Victoria. The 'V' is formed by 22 golden posts, each representing one of 22 miners who were killed that day. This bloody battle became known as 'The Eureka Stockade'. 'Wee Jock' is depicted at the monument looking up at his master. 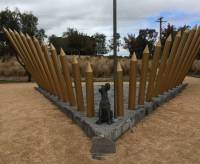 This statue and 'Wee Jock' are important because this was the first battle for workers' rights in Australian History. Isn't it wonderful that a recognisable pure breed dog is the highlight of the monument to Australian Democracy!

The Irish Terrier of 'Cameron's Scouts'

The second iconic Irish Terrier was attached to a famous group called 'Cameron's Scouts'. They came from country Victoria, where the local newspaper, 'The Camperdown Chronicle' reports that on March 13th 1900, the Cameron's Scouts rode their own horses through the streets of Melbourne to board the boat bound for South Africa. They were leaving to fight in the Boar War (1899 - 1902). This War, between the British and the Dutch was over diamonds and gold. As part of the British Empire, proud Australians felt it was a huge honour to fight alongside the British Imperial Army. 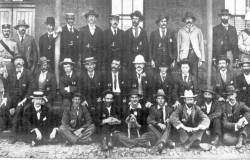 Part of the 3rd Contingent led by Lieutenant J M'L  Cameron, 'Cameron's Scouts' was named after their leader who commanded them. 'Cameron's Scouts' was made up of 27 men of hand-picked, trained scouts, together with their horses and the Irish Terrier pictured. The exact role of the dog is not recorded. But it can be assumed it was one of reconnaissance, detecting the enemy well in advance of the entire contingent. Before the days of more sophisticated equipment, this excellent work of 'Camerons Scouts' has been referred to on several occasions by correspondents and other writers. Despite this, the pedigree and details of the Irish Terrier remain unknown.

Sadly, the carnage of Australians during the Boer War is well documented. This included not only men, but also those faithful surviving horses which were mercilessly shot because they were not permitted to return home to Australia. We could not find any record of the dog returning home either.