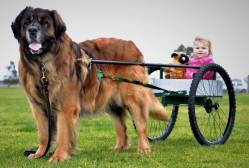 Carting, or 'Drafting' as it is called in the modern formal activity developed by the ANKC and AKC, was an essential to the lifestyle of the late 1800s and early 1900s. Today, dogs pulling carts make a wonderful spectacle in exhibitions that demonstrate the diversity of our beloved canine friends. Additionally 'Drafting', the formal sport held under the Rules of the ANKC or AKC, is enjoyed by many dedicated enthusiasts.

The History of Carting 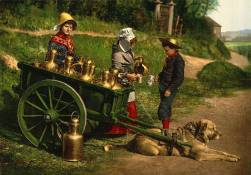 In the late 1800's, dogs pulling carts were a common sight around the agricultural districts of England, Belgium, Holland, Germany, France and Portugal. Specifically, in Switzerland and around the city of Bern, dogs were used to pull milk carts. By the 1900's, there were changes in the rural scene of Switzerland. Cattle herding in the mountains decreased and the farmers of the valleys began keeping cattle on their farms and selling milk. So, the large dogs that formally belonged to the Alpine cattle people and used as Livestock Guardian Dogs, became draught dogs, mainly used to transport milk. This meant they were usually owned by milk maids and cheese makers who favoured dogs with softer temperaments than those of the Guardian Dogs. Hence the docile, placid nature that has made the Bernese Mountain Dog so popular today. 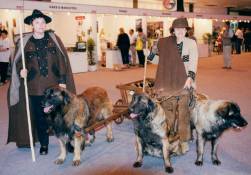 Most often dogs hauled small delivery carts belonging to bakers, butchers or milkmaids. It was also common to see a brace of dogs harnessed to children's carriages. In those days, the construction of the carts, and the manner of harnessing the dogs so that the burden could be equalised, was scrupulously policed by municipal by-laws. The carts had to be on springs, with brakes. The shafts had to be mounted on a pivot, enabling the dog to turn around without being struck by the shafts, and placed so the dogs could lie down at ease, unencumbered by the weight of the cart.

Carting as a Formal Activity

Today, carting with dogs is recognised as a formal activity called 'Drafting' by the ANKC and AKC. Dogs love being exercised and earning praise from their owners. In turn their owners love competing for titles. Dogs which take part in this activity begin their training at a young age.  At first, the pup learns to wear a harness. Then the harness is attached to a light object like a cardboard carton, so the pup gets used to being followed by something strange. Additionally, the pup must learn some basic obedience commands like 'pull', 'halt' and 'stay'. By the time the pup has reached two years of age and is eligible to take part in formal competitions, it has learnt to be attached to a specially constructed cart with custom built shafts. 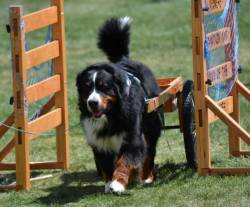 Whilst competing, dogs must be on a loose lead. Rather than scoring points with an ultimate winner, the dog either passes or fails its test. Formal exercises include navigating the dog through a set course during which they turn right, left, travel in circles, and move not only at different speeds, but also backwards. Whilst competing, dogs must also ignore decoys. These distractions of both sight and sound might be a toy placed in the path of the dog, and a noise like a bell or a whistle. As with other activities, dogs qualify for titles at different levels with the exercises becoming more and more difficult. An advanced dog can even gauge the width of its cart so it can navigate gates!

In Australia, among the popular approved breeds eligible to take part in today's formal carting activities are the Saint Bernard, Newfoundland Leonberger and Rottweiler. This is yet another way one can enjoy competing with a suitable dog, especially with a Bernese Mountain Dog.

In some parts of the world, modern water training and trials for dogs have been designed to reflect the historical instincts of those breeds whose background was specifically developed to rescue people. This activity is designed to encourage these natural water rescue instincts. Among the breeds proven to have natural instincts for this work are Newfoundlands, Portuguese Water Dogs and Leonbergers.

"Hector", the first Newfoundland to land in Australia belonged to John Marshall, the captain of the "Scarborough" one of the eleven ships that made up the First Fleet that arrived here from England in 1788. As it was the usual practice for ships to carry a giant sea rescue dog on these long voyagers, we can only assume this was the reason so many Newfoundlands were found here in the early 1800's.

As regular travel by air was not viable until the early 1970's, the only way the rest of he world could travel to and from Australia was by boat. Australia's Royal Life Saving Society was established more than 125 years ago. So why have the natural instincts of our water rescue dogs not been utilised here? It is not difficult to train a rescue dog. In fact it can be great fun!

Training begins with basic Obedience exercises like heeling, stay, and recall. These develop the bond between dog and handler. Water training follows with the dog learning to retrieve floating objects from the surface of the water, graduating to objects that sink below the surface. 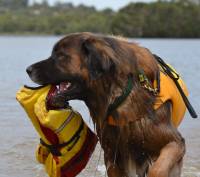 The dog is then taught to swim out to the person to be towed back to the safety of the shore. The dog may carry a life jacket to the person in the water.

The dog also learns to tow an object attached to a rope back to dry land. This object may begin with a toy but progresses to a boat that can carry a person or persons. Once the dog learns some or all of these skills, he has become sufficiently experienced to compete for titles.

This is yet another fun activity that can be enjoyed by a person with a suitable dog. Let's hope this activity gets underway in Australia soon and advances to a level where a trained dog can be useful in real life situations.