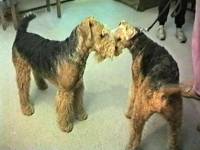 This section explains how to assist the dog and bitch if you wish them to mate, what to do if an unplanned mating occurs and the etiquette of stud fees.

Left entirely to their own devices, mating usually occurs when the bitch is 'ready'. In other words, a male (dog) and a female (bitch) usually have the instinct to mate and a mating occurs.  However, this is not always the case. Dogs are extremely social animals and some dogs do not appear to know what to do, and/or do not appear to recognise advances from the bitch. This section is aimed at those who wish to breed, and give pregnancy its best chance. It also assists in minimising any possible damage to the dog or bitch's reproductive parts during the mating process.

On the other hand, unplanned matings or misalliances happen between different breeds like the Chinese Crested and Italian Greyhound pictured. Should you find your bitch already joined to a dog that is not of your choice, do not attempt to separate them! By the time you discover them tied, conception will have commenced. Best to wait until they separate and then take the bitch to the veterinarian as soon as possible (within 24 hours) and get an injection. This will abort any unplanned or unwanted pups.

Supervising the Dog and Bitch 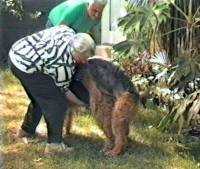 Once the bitch enters the oestrus part of her breeding cycle, when introducing her to the dog you have chosen for her it is a good idea to put the bitch on a secure collar and a lead. Usually the male dog will be happy to play with the bitch, even though you are holding her lead. But the bitch may show aggression towards the male dog, especially if she only knows her human family and is not socialised with other dogs. By having her on the lead, the situation can be controlled.This courtship is a necessary part of this process.

When the dog is ready to mount, steady the bitch with one hand in her collar and the other around her ribcage. This makes it easier for the dog and if the bitch is uncomfortable with the process, you can re-assure her. If you have a small breed, a dog which will perform on a table can be very useful, especially if the two lock together for an extended period.

If the bitch is what we call a maiden bitch which means this is the first time she has been mated, she will appreciate being courted for a longer period. So be patient with her! If the male dog works for any length of time but does not seem to be getting anywhere, the bitch probably is still pro-oestrus or not quite 'ready'. It is then best to separate the two and give him a break. However, when the dog does enter the bitch, best to hold the two together while the knot of his penis fully expands, which may take a few minutes. Usually the bitch, even the maiden bitch will stand steady once the knot of the dog has fully expanded inside her. 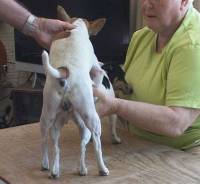 If the dog enters the bitch and his penis enlarges and distends but comes out of the bitch before the tie has taken place,this is called a 'Slip Mating'. Usually the dog will mount the bitch several times before he enters. Sometimes he will enter the bitch without his penis enlarging but jump off again without proceeding. If the bitch is ready, she will also often adjust herself to facilitate the mating. Most dogs will find the right spot themselves and will object to you interfering or handling their private parts. Best just to steady the bitch and let the dog work. He may work for a few seconds or even a few minutes until he fully enters the bitch and his knot enlarges inside her. It can be handy to have another person present to steady the dog just for the few moments it takes for his knot to enlarge. If you do this and only a slip mating has happened, pregnancy is still likely as the first part of the ejaculate contains most of the sperm. If the penis is not fully distended, the dog may oblige and try again.

However, if the penis is fully distended, it will be quite swollen and the erectile tissue at its base will be obvious. Ejaculate will drip out of the end of his penis for around the same time as if a tie had taken place. As lots of fluid drips from the dog while he is distended, it is less messy if you collect it in a wide mouthed vessel as shown. Slip matings usually occur because the bitch is not quite ready. If she is a bit early, repeat the procedure the next day if practicable or certainly the day after that and a tie mating will usually result. 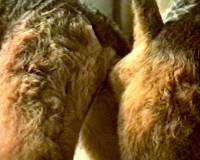 Dog and bitch tied back to back

When the two come apart best to make certain the dog's penis has retracted completely. If it has not, it is necessary to hold the male in an upright position and he will appreciate you manoeuvring the penis back into its sheath. This is very important and will prevent any permanent damage to the dog. 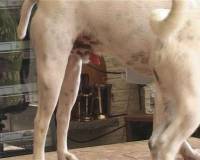 Put the penis back!

There are many reasons why a natural mating may not occur. If both the dog and bitch are present, it is simple to collect the semen when the dog is distended. Then drip the semen very slowly into the bitch with a clean eyedropper or syringe over a period of around 20 minutes. Again make certain the dog's penis is fully retracted into his sheath and is not left exposed as shown. This process will be given the best chance if the semen is kept at blood temperature during the entire process. It is also believed that if the bitch is held upside down in a position with her back legs higher than her front legs, gravity will assist the semen reach the eggs.

Should chilled or frozen semen be used, best to use a veterinarian specialized in transporting and inseminating. Frozen semen has opened up the possibility for dogs deceased for two decades or so to father new litters. It is now also possible to transport semen around the world. It is quite amazing how far pedigree dog breeding has progressed in the 21st Century! 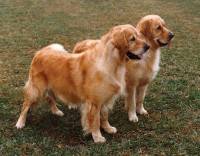 It is usual for the owner of the male dog to charge a fee for his use. But it is also usual for the bitch to visit the dog and pay any transport fees applicable and not the reverse.The fee should include at least one more mating for that bitch within the same season or even two more if deemed necessary.  The stud fee should be paid and pedigree papers signed once the owner of the bitch witnesses the tie mating. If the stud dog has not fathered a litter before or there is no tie mating, it is usual practice for the stud dog owner to wait until bitch is proved to be pregnant or the puppies actually born before the stud fees are paid.