The History of Setters relates how Setters originated. But the Gordon or Black and Tan Setter was originally bred to find game birds that lived in the steep, rugged heather-covered slopes of Scotland. Although this extremely robust dog never enjoyed the same popularity as a field or show dog as his English or Irish Setter cousins, his substantial build and shiny black and tan coat makes him immediately distinctive.

History of the Gordon Setter

In England the first mention of the Gordon Setter goes back to 'the Whole Art of Fowling by Land or Water' by Gervaise Markham in 1655 AD where he described the black and fallow (tan) hunting dogs. To this end, it is likely that Bloodhound was introduced to improve his scenting abilities. This could account for the more substantial build of the black and tan or Gordon Setter compared to other Setters. 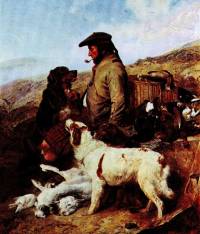 In the early 1800's numbers of Setters were kept in Gordon Castle, Scotland by the Duke of Gordon. By around 1872, the Rev.T.Pearce was considered to be an authority on the breed. Writing under the name 'Idstone', he believed the Colley dog (now either the the Border or Collie Rough) was responsible for the predominately black and tan colour of the Gordon Setter which, before then also had a considerable amount of white. He wrote: 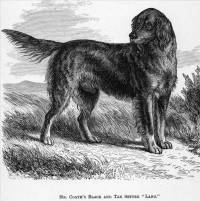 The story goes that the Duke (of Gordon) heard of a shepherd's bitch which was a wonderful finder of grouse, pointing them stiffly, finding them when the Setters were at fault, so that the shepherd and his bitch were frequently in request when the castle party was unable to find game. Having ascertained these facts, the Duke bred from her, and so originated the black and tan breed'[1].

History of Gordon Setters in Australia

One Gordon Setter named Don owned by Mr J DeLittle of Clarendon Street Melbourne was listed in the catalogue of Victoria's first dog show held in 1864[2]. This was the same year that Mr Lachlan MacKinnon imported from Britain a dog and bitch named 'Ponto' and 'Dido' respectively.

Ten years later another pair was imported followed by another six. These included the dog Heather Bounce and a bitch Heather Bloom in 1889, followed by another dog Heather Spark in 1892. These three imports went to Mr Haddon who was considered to be the founder of the modern Gordon Setter in Australasia[4]. By 1910 a total of 31 Gordons had been registered[3].

Mr A.E. Prentice and a small but dedicated band of enthusiasts supported the Gordon Setter through the depression years, believing that he was the best worker of all the Setters for Australian conditions[5]. 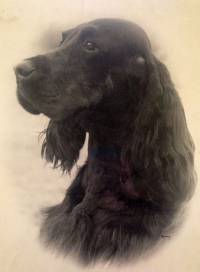 Then after World World War Two of particular influence on the Gordon Setter in Australia was the show and field titled American Champion Sutherland Hallmark QC (pictured) who arrived here from USA in 1974. He quickly gained his Australian and New Zealand show titles and was a particularly prepotent sire with 67 Champions to his credit. Today he still appears somewhere in the pedigree of many of today's Australian Gordon Setters.

Always stylish with a shining deep coal black coat and lustrous brown markings, the Gordon Setter is built like a weight carrying hunter horse. He can weigh almost 30 kilos (65 pounds) be up to 66 cms (26 inches) tall. 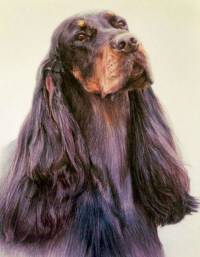 The top and bottom of the muzzle are also parallel but not quite as deep as it is wide. This makes the flews neither pendulous nor snipey and causes the mouth to house a normal scissors bite. The nose is large, broad and black. The eyes are set under the brows and the thin ears are of medium size and set low, lying close to the head.

The neck is long and lean, without dewlap. Looking from the front, the chest is not too broad and forelegs have flat bone with straight, strong, upright pasterns. The oval feet with their deeply cushioned pads and well arched toes with plenty of hair between them act as protection for the dog when he is working.

In profile the body is not too long. But the shoulder blades are long and close at the withers but never loaded or bulging with muscle. The brisket is deep with the elbows working close to the ribs which are also deep, right through to the back ribs. The slightly arched loin is wide and almost horizontal with the tail set completing the picture. This is despite the tail itself being thick at the root and tapering, being either straight or scimitar in shape, and being allowed to be set either level with or slightly below the level of the back. The hindquarters are broad, strong and  muscular with a good turn of stifle and short hock. 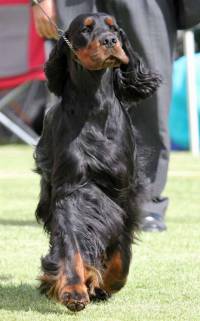 At a trot, the Gordon Setter has a steady, free-moving balanced gait with plenty of drive from behind. The coat on the head, front of legs and tips of ears should be short and fine but the body coat is of moderate length. The feather on upper portion of the ears is long and silky, but on the backs of legs it is long and fine. The fringes on the belly may extend to the chest and throat. But despite its varying lengths, the coat should always be as free from curl or wave as possible.

As with all black and tan breeds the colour is very precisely described. The Gordon Setter's coat is shining coal black with lustrous chestnut red markings. Although a little black penciling on the toes in allowable, the chestnut red is placed as follows:

Comparison between the English, Gordon and Irish Setters