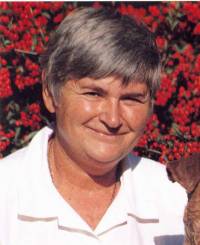 In 1962, Gisela Lesh arrived on my doorstep some 5 kilometers from her home having walked with her Airedale pup 'Moylarg Sheba'. 'Gish' as she became known had entered 'Sheba' in the forthcoming Royal Melbourne Show and asked for my assistance grooming her. Unfortunately Sheba had been clipped and looked very rough. Although I did what I could in the 3 weeks before the Show and giving some basic routine handling instructions, 'Sheba' finished third.

Gish as she called herself, was a draughtswoman by trade. She was a German immigrant from Stuttgart who came to Australia by boat on which she met and then married her husband Nick Lesh. Nick who was also of German descent had survived World War Two with relatives in England so he spoke good English which was handy for Gish. Gish was a troubled young lady having survived the horrors of World War 2 in Germany so their marriage did not last long. However, Gish created a world of her own propped up by hard work and the development of her skill with her grooming and handling Airedales. She imported Ch Siccawai Remus from UK and I assisted with the mating of this pair and also the whelping of her first litter. I took a bitch puppy from this litter who became the foundation for Rangeaire. As Gish's passion grew and the number of dogs with it, she built an amazing kennel block in her back yard single-handed. 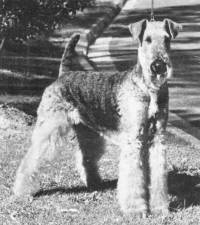 After she moved to NSW, she sent an imported bitch down for a mating to Ch Rangeaire Ringo Starr and produced Strongfort Stringo who in turn sired Ch Strongfort Smartass. Among the other Champions she bred and owned, Ch Strongfort Sexpot sired by Exmoor Kennels' Ch Bengal Valley Forge (Imp UK) was probably her biggest winner and would have almost certainly made the title 'Supreme Champion' under today's system. 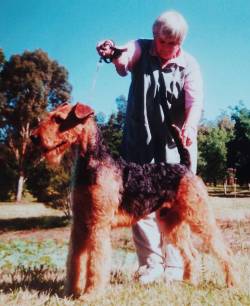 In the early 1990's after a trip to Russia where she judged, she gifted an Airedale pup Strongfort Podarok (Russian for 'Gift') to a Russian breeder and received Ch Rotman Natasha Bright in return, which was a very expensive exercise! She also exported Ch Strongfort Saturn to USA. She claims this dog was the first Australian-bred Airedale to gain his American title and that he had sired 16 Champions in USA.

Over the next half a decade her impact on the breed both in Victoria and NSW was outstanding. She became an all-breeds judge but sadly passed away in 2016. Despite numerous approaches, she declined my invitations to contribute to the site. So I have confined this to her connection with 'Rangeaire' and my memories of her.