Len Latchford (Aerial) arrived here before WW1 with an Airedale and later became a colourful character. When he arrived in Australia, he had with him 'CLOMNEL MOTHERSIA'. Later Mr. Latchford imported CLONMEL CRACKSMAN who was used over the bitch imported by a Mrs Waters, AEROPLANE. It is presumed this is why his dogs bore the prefix of AERIEL. As Mrs Greta Florence began where Len Latchford left off, we have included them both on this page.

Later he brought in CH WATLANDS PERFORMER who, according to one source was

'a very good type of dog with an excellent jacket'.

These 4 imports (MOTHERSIA, AEROPLANE, CRACKSMAN and PERFORMER) laid the foundation for his kennel which was very successful in this period. 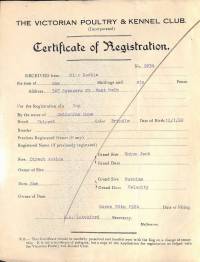 Mr Latchford was the Secretary of the Victorian Poultry and Kennel Club for some years as is evidenced by the 1924 Whippet pedigree attached.

In 1918, he appeared at an exhibition at Government House with an Airedale, which was trimmed. This caused a sensation at the time. Trimming dogs was an art he brought with him from UK, and pioneered in Australia. At that time, the attitude to trimming for show presentation was best summed up by the English pioneer Airedale breeder and judge, Mr. Holland Buckley, who wrote:

"The idea that clever trimming will deceive an experienced judge is really laughable... A broken coat can, no doubt, to the casual eye, cover a multitude of sins, and sometimes a sausage body; but how any expert can cover up, by trimming, defects of make and shape is one of those things no fellah can understand, - always allowing, of course that the judge is a capable one". 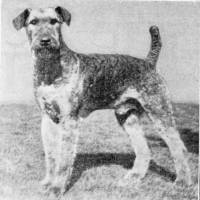 Mr Latchford was a respected judge of dogs all over Australia and New Zealand. He was also a prolific writer in publications about dogs.

Around 1933 The Sun News Pictorial newspaper published magazine called "The Sun Dog Book', containing some 50 pages, basically highlighting a breed on each page with photos taken by a well known nature photographer. Len Latchford, already well known for his writings in other publications was responsible for the text. In the absence of any pictures of Len Latchford's Aerial dogs, it is fair to assume these pictures, from the 'Sun Dog Book' were Ch Watlands Performer'(Imp UK) who he imported around this time, and also the dogs which appear below. 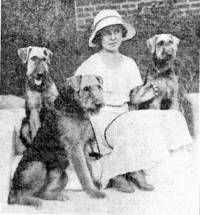 Mr. Latchford was a colourful character. But unfortunately his membership was suspended for life by the Kennel Control Council of Victoria (KCC) because he got caught up in New Zealand politics that were happening in 1932 when he judged an  'unrecognised show' held by the Auckland Kennel Association in 1932. At that time the New Zealand Kennel Club enjoyed affiliation with the Kennel.Club (UK).

It all began with a revolt in NZ by around 100 people who questioned compulsory membership of the NZKC. They formed a 'rival organisation to the NZKC called the Auckland Kennel Association (AKA) which was not affiliated with the Kennel Club (UK). So when the AKA ran a Show, the NZKC declared it to be 'unrecognised'[3].

More trouble arose because the rival organisation, the AKA was not affiliated with the Kennel Club (UK). Threatened by what could happen if this created a precedent for affiliated Kennel Clubs in the South Island to be also set up in opposition to the NZKC, they disqualified the AKA and their Victorian judge on the day, Mr Len Latchford. Then Victoria's Kennel Control Council endorsed the NZKC's action under what they claimed to be a reciprocal agreement with the New Zealand Kennel Club[4]. Consequently, the KCC of Victoria disqualified Mr Latchford, prohibing him from ever participating in pure breed dog activities again.

The result of this suspension is best described in the following extract[1] written by the late Mr. Ken Rowles, published by 'National Dog Newspaper' Special Supplement Page (iii) in July 1978:

"Len had a great professional outlook. He was a superb writer of dogs in the 'Sporting Globe' and 'Leader', for many years Superintendent of the dog pavilion at Melbourne Showgrounds, an outstanding conditioner and handler of all-breeds, and for thirty years our leading all-breeds judge.

Just before the outbreak of the Second World War, he fell foul of the powers and was admonished (banned) by the KCC from the dog world, which was his only world, for life.

Even though he had been a very strong rival of my father's, as handler, breeder and judge, for many years, there was a bond of mutual admiration, and with the declaration of peace my father campaigned for, and was successful in obtaining an amnesty for him, conditional that he remained outside Victoria. However, it was too late, the years away from his one and only love left their mark.

Gone was his sartorial elegance - the tailored suit, coloured waistcoat, silver-topped walking stick and spats - his confidence was shattered, no longer did he speak with confidence in a soft and impeccable voice. It was replaced by a down-and-out alcoholic, a man who died without his friends knowing, and who was buried in a pauper's grave". 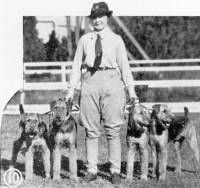 After purchasing her first Airedale in 1926, Mrs. Greta Florence, firstly in partnership with Mrs. Smith and later on her own, bred some lovely Airedales under the Millswyn prefix.  Mrs Smith is pictured here with puppies out of Ch MILLSWYN BUSY BEE sired by 'WALNUT BRIAN' (Imp UK).

Their first dog 'Laddie' was bought as a pet and a watchdog. He is pictured in the thumbnail at the top of this page together with CH MILLSWYN ARGO referred to below.

But when Mrs Florence decided to show Laddie, she wanted his show name to be 'Laddie of Millswyn Street' as she lived in Millswyn Street, South Yarra at that time when there were 3 controlling bodies in Victoria registering dogs. Unable to register the name 'Millswyn', with one registration body, I remember my amazement when she told me she took the same application for registration form to the Victorian Poultry and Kennel Club and registered the name of her first Airedale as Millswyn Laddie. So he became the first in a long line of Millswyn Champions, although of course Millswyn Kennels did not breed him. Later this prefix was transferred to the Kennel Control Council when it took over all dog registrations in 1933. 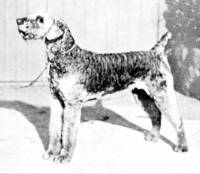 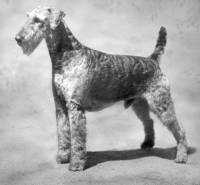 In her later life Greta moved to Ivanhoe where she continued to breed Wire Fox Terriers still under the Millswyn prefix. I remember driving this charming old lady to Sporting Terrier Club meetings, still interested in dog affairs even in her old age.