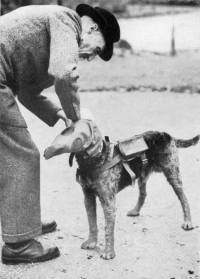 Messenger dog in World War One

In the days before mobile phones, it is difficult to imagine the isolation felt by the thousands who fought the wars of more than a century ago. But only limited material remains of the brave dogs who played many important roles including reconnaissance, assisting with communications, carrying supplies to the wounded and providing comfort to those who spent weeks confined to the trenches.

The South African Boer War of 1899 - 1902 between the British and the Dutch over diamonds and gold, happened when we were forming our first Federal Parliament. As part of the British Empire, proud Australians felt it was a huge honour to fight alongside the British Imperial Army. Among the 'Bushmen' contingents that were formed at this time was one group of 297 men, each with their own beloved horse. 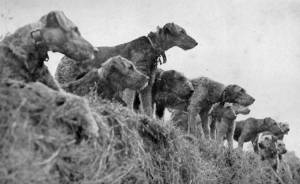 The Camperdown Chronicle reported that on March 13th 1900 as they rode through the streets of Melbourne to board the boat bound for South Africa: 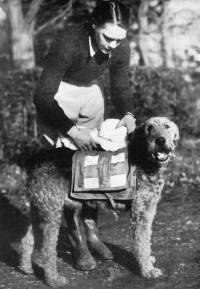 "..  along the line of the March was cheering and hat and handkerchief waving, many of the bushmen were nearly dragged from their saddles by the strength of the hand-shaking they received from demonstrative spectators. They looked a hardy, well-seasoned lot of fellows, most of them with that browned lean look of men who had known rough bush life, and were in first-class physical condition"[1a]. 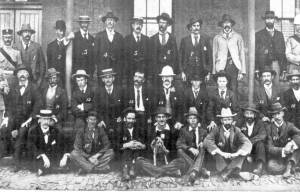 This particular contingent included the 27 men and the dog pictured, a group called the 'Cameron's Scouts' after their leader. The exact role of the dog is not recorded but amazingly his pedigree is! But presumably the dog's role was one of reconnaissance which meant he would detect the enemy well in advance of the entire contingent. 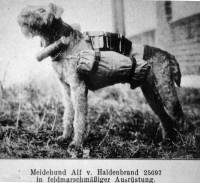 Sadly, the carnage of Australians during the Boer War is well documented. This included not only men, but also those faithful surviving horses which were mercilessly shot because they were not permitted to return home to Australia. I cannot find any record of the dog returning either. 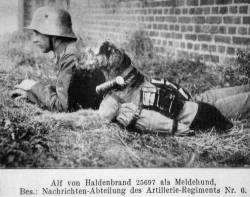 As World War One progressed there was scarcely enough food in England for people. So, many beloved dogs were abandoned. Those that proved to be suitable were trained for the purposes described below. During this war, medium sized dogs like Airedales, Collies, Retrievers and crosses thereof were used. It is interesting to note from the accompanying pictures that dogs, particularly Airedales were used on both sides of World War One. 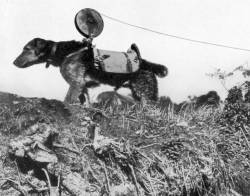 Important communications often relied upon dogs. There were the scouts described above, and also the sentry dogs that were essentially watch dogs. But the work of the highly trained messenger dogs for field communications was vital when telephone lines were broken and visual signalling was impossible. The success of these messenger dogs relied on cultivating the dogs' natural instinct to return to an ever-changing designated place. 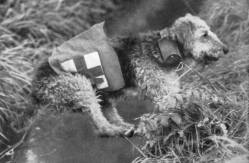 Training the dogs was initially done in England and then in secret, near enemy lines amid constant gunfire and bombing raids. The dogs were trained mostly at night, in every possible type of terrain even along busy roads. At first they returned to the trainer's headquarters to a delicious meal of liver. Once this routine became reliable, their home was regularly moved so later moving became a daily routine. Hence the dogs got used to returning to any location from which they had been led. And return they did, famously through gunfire often wearing gas masks, over rough, unfamiliar terrain and through troops on the march. As pictured, the collar the dogs wore had a pouch which contained the message they delivered.[1]

"Dane, N. 29 did good work at all times, but I did not know what the messages contained, but during the German offensive on Kemmel in 1918, he fetched the situation reports every morning for ten days, when all other communications were broken and very heavy shelling was going on"[1a]. 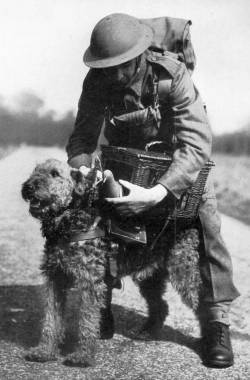 Other Types of Communication

The more highly trained dogs carried a pigeon within a basket through the gunfire to a place where the bird could be safely released to carry a message from the war zone in Europe, back to England. Some dogs were also trained to carry wires to connect telephone cables between trenches or back to headquarters. In other cases, dogs would carry basic medical supplies to the wounded. Such were the important roles played by thousands of dogs on both sides of the conflict during World War One.

The role of dogs during times of human conflict should never be forgotten. Apart from the jobs described above done by these wonderful dogs, the companionship and comfort they provided in trenches and other conditions of unimaginable human suffering is a role that should never be underestimated.