Robert and Margaret Warrens first Airedale 'Felix' was bought early in their marriage. Their later involvement with Airedales would span more than 20 years, breeding 6 Champions along the way. But in the beginning Robert had considered a Doberman but having visited a friend and met an outgoing, friendly, fun-loving Airedale, Marg and Rob wanted their 3 children to grow up in a household that owned a dog like him. To this end, 'Felix' proved to be a great success. 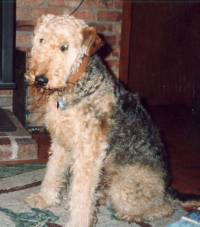 About a decade after 'Felix' died, Robert read about us in a newspaper and this rekindled the desire to get another Airedale. So as their beloved 'Felix' proved to be a grandson of Ch Brentleigh Ben Nevis C.D, they must have subconsciously recognized the breed type.

We were expecting a litter at that time, but as the litter was smaller than anticipated, we recommended Alan and Pam Bardoe who had a litter from Aust Ch Rangeaire Ragtime Beau C.D. So they purchased Ch Devonaire Ringmaster. A few months later they also purchased Ch Rangeaire Rubina Rose, a Rambo-Raggtime daughter. This gave them the basis of a small kennel with real possibility of line breeding. As they lived in a Melbourne seaside suburb, they registered the name kennel 'Seaire'.

Ch Rangeaire Rubina Rose was a very successful showdog, especially considering the Warrens had never shown a dog before. 'Rosie' managed to amass some 402 Challenge points, a Best Exhibit in Group, a Best Opposite Sex in Group and at least 3 other in-group awards. So, under today's rules she was almost half way towards the title Grand Champion! 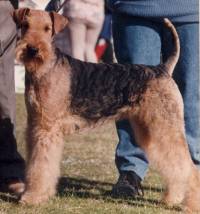 I well remember whelping their first litter. As they lived around one hour's drive away, I drove down the afternoon before instead of getting up in the middle of the night. As they had told me their son was away at school camp, there was a spare bedroom. So imagine my horror when I discovered the son also kept 'pet' snakes in his bedroom! Despite being told the snakes were not dangerous, I shall never forget how much sleep I did not get! 'Rosie' began whelping early in the morning and I was very tired when the whelping was over!

4 Champions from a litter of 5 pups 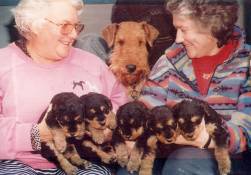 Myself, 'Rosie', Marg with the 5 pups

The next litter from Ch Rangeaire Rubina Rose was also quite eventful. They decided to use frozen semen from Ch Rangeaire Rolls Royce. Technology both for collecting semen and inseminating it was in its pioneering stages so this was a long and difficult procedure. Not only did Rosie live a long way from the Vet who had the semen stored, the semen was 18 years old when at the fourth attempt, there was a successful insemination.

This was also a very expensive exercise not only because of the collection and storage charges, but also the cost of the three unsuccessful attempts. So when we found out  'Rosie' was definitely pregnant at last, as there was no ultrasound available in those days, we opted for a cesarean section rather than risk losing the pup if there was only one.

The day came and Robert had been working night shift. It was a two hour drive to the vet's stopping to pick me up en route. We finally arrived and all 5 pups were safely delivered while Robert slept soundly in his van. Although the two smallest pups had to be tube fed, all 5 were successfully raised. 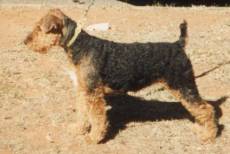 At one stage the Warren household housed some 6 Airedales, all of which lived in the house well into their old age. So rather than be without an Airedale, Margaret and Robert purchased a new Airedale bitch 'Stella' from Qualap Kennels in Western Australia. 'Stella' is the grand daughter of Ch Rangeaire Rummpole, fortuitously from the small litter that had no pup available for them when they first approached me more than 20 years before. They have plans to continue their involvement with Airedales by breeding 'Stella'. They got used to their home being owned by Airedales!

Whilst thanking Robert and Margaret for their co-operation with this story and the photographs, socially they remain among my closest Airedale friends.