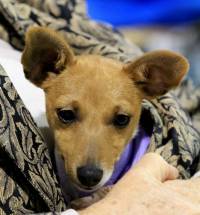 This section explains the peculiarities of the reproductive anatomy of a dog, the breeding cycle of a bitch and how to observe when she is producing eggs.

The canine reproductive mechanism is quite unique. Many mammals have oestrus cycles where bleeding is the outward sign that the female mammal is getting ready to accept the male. However, with the menstrual cycle of humans, bleeding occurs because the woman has not conceived. The uniqueness of the dog's reproductive cycle is that when a successful natural mating occurs, the male dog stays locked to the female for a considerable time usually around 20 minutes but varying from ten minutes up to an hour. This section demonstrates the peculiarity of the dog and the oestrus cycle of the bitch so that this process can occur.

The Peculiarity of the Male (Dog) 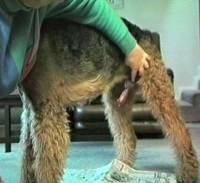 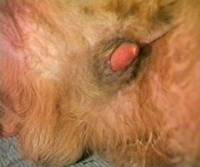 As well as the penis itself, at its base there are two sections of erectile tissue capable of swelling. These are quite separate from his testicles. This erectile portion of the penis is capable of locking inside the bitch when a mating takes place. The erectile tissue is only obvious when a dog has a full erection. It is also quite normal for this erection to occur either within or outside of the dog's sheath when there is no bitch present.

The Cycle of the Female (Bitch)

The normal breeding cycle of a bitch lasts for around three weeks, but this can vary either way by quite a number of days. In a normal cycle the bitch will mate in the middle of this period. Most male dogs will instinctively know when the time is right and if you have a dog and bitch you wish to breed with, best to be be guided by him in the first instance. If you have no male dog present or artificial matings are used, the veterinarian will perform blood tests and read the progesterone levels to ascertain this time accurately.

An overview of a normal bitch's reproductive cycle is best explained by dividing it into the following sections: 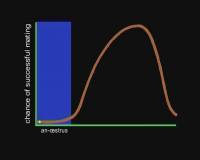 When you notice blood coming away from the bitch's swollen vulva you know she is in season. It is often difficult to tell that very first day of season as some bitches are extremely fastidious, constantly licking themselves and keeping themselves clean from any signs of blood. If she is run with a male dog, that makes it easier to tell. You might have to wipe the vulva with a white tissue to ascertain whether or not there is any blood present at all and if so, it's colour. With some bitches the colour of the initial signs of blood is quite dark, with others it is obviously blood. The period of an-oestrus is when the bitch is not bleeding at all or just starting her season with a very slight dark discharge. 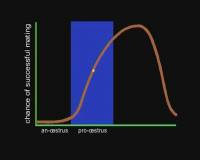 The next phase is called 'Pro-oestrus' when the bleeding actually begins. It is important to note this day as this affects the timing of when she is ready to accept the dog. During this time she will flirt and even present her vulva to the dog, but will not 'stand' for him or accept him. If you have an inexperienced dog, it is important you separate the pair for long periods during each day until he learns what this is all about. Then when ovulation occurs, he will be not worn out and will still be keen to mate her. 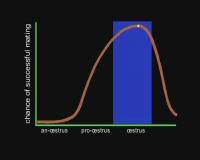 The most vital stage is called 'Oestrus' because this is when the bitch is actually ovulating. This is usually around the tenth day after the first signs but can vary considerably from the eighth day to the fifteenth! The outward signs are that she flags her tail, will stand often stiff legged and will swing her tail instantly as the dog mounts her. The colour of her discharge should look as though it has been diluted but with some bitches there does not appear to be any discharge at all. But don't be fooled that her season has finished as this is quite the contrary. 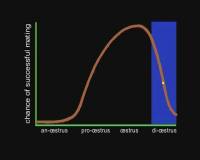 The last stage is called 'Di-Oestrus' where the vulva is still swollen, there may or may not still be a bloody discharge and the bitch begins to produce those hormones responsible for pregnancy. But if the bitch has been mated, don't be fooled as she will be very happy to repeat the experience with any other dog. Should this happen, you could get a litter with multiple fathers. If this is the case, a DNA test will be necessary to prove which dog has fathered which pup before the resultant litter is registered.

It is important to realize that whether or not a mating has taken place, a bitch will produce hormones after being in season which will be present in her body for the same nine weeks as if she had been mated. Often milk will be produced and the bitch may become very possessive of a toy. I believe it is necessary for a bitch to go through this cycle for the sake of her complete mental and physical development, before de-sexing if applicable occurs.