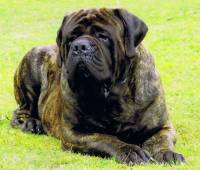 The breed we refer to as the Mastiff is more precisely defined as 'the Mastiff (English)'. Selectively bred to look like his interesting ancestor the Mastiff of England, his powerful giant build and the huge head marks the nobility and courage of his past.

The Mastiff becomes a Pure Breed 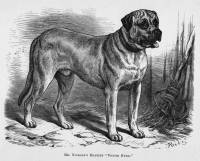 The Mastiff(English) was listed in the First English Stud Book of 1859 - 1874. The resurrected pure breed we know today had its beginnings when J H Walsh, writing under the name 'Stonehenge' famously wrote:

'We want a large and handsome dog, possessed of a temperament which will bear restraint under provocation, and, at the same time, of courage to defend his master till death'[6].

Over the next century and a half, the Mastiff's temperament was carefully developed to be socially acceptable in modern society. Today he can be relied upon to be calm, affectionate, docile and indifferent to strangers. This is in direct contrast to the important historical description of 1570 AD below.

History of Mastiffs in Australia

In Australia, according to the catalogue of the first dog show held in Melbourne in 1864, 10 Mastiffs (English) were exhibited[3] by Mr Sewell of 213 Elizabeth St and 2 by Morris Taylor of Bourke Street West. It is amazing to think these large dogs were housed in what is today the heart of Melbourne! But popular they were with another 12 being imported during the period 1864 to 1895 including 'Jonathan' pictured[4]. 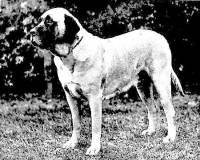 But as none are listed in the Stud Book section of Tyzack's Annual as being represented in Victoria by 1911 despite the St Bernard, Mastiff and Newfoundland Club being formed in 1891[2], it seems that this early popularity died out until 1960 when a couple more were imported. But 1970's saw the real revival of Mastiffs in Australia when Mr Mummery and a few others brought in sufficient new blood to re-establish the breed here[5]. 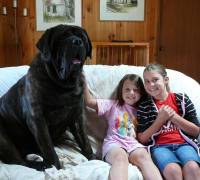 A powerfully built dog, the Mastiff should be as large as is possible, combined with absolute soundness. Although the general outline of the broad flat head should be square, the ratio of its breadth to its length should be 2:3, with a stop between formed by the brows. 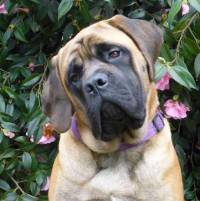 The broad black muzzle should be one third the length of the skull. The muzzle should be strong and deep with the flews cut off squarely, housing a level or reverse scissors bite. When alert there may be some wrinkles on the head, especially in puppies. The nose is broad and black. The dropped ears are small, thin and 'set on' high and wide apart on the skull. The eyes are of moderate size, with black close fitting eye rims that never show haw. 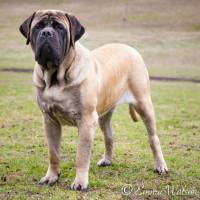 The neck should be moderately long flowing into a well laid shoulder. The forelegs are well boned, straight, set wide apart, with upright pasterns and large round tight feet with black nails. The chest is wide and deep and the body broad and powerful with well arched and well-rounded ribs. The loins and hindquarters are strong and muscular with a good turn of stifle so the dog stands squarely on all his legs. 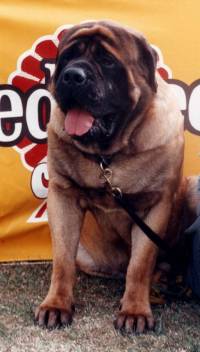 Although the length of the body is longer than square, a level topline should be maintained whilst the dog is moves with balanced reach and drive. The tail is thick at the root and tapers as it reaches the hock or below, and although set on high, should never be carried above the level of the back. The short coat is either apricot, fawn or brindle.

Origin of the Mastiff or Bandog

In 1570, Dr. Johannes Caius named these dogs Mastiffs or Bandogs in his classification that was written in Latin and translated into English by A Fleming in 1576[1]. The original translation of this important work is in my opinion too difficult to read to be printed in its original form. So it appears here as my interpretation in modern English:

What is a Mastiff 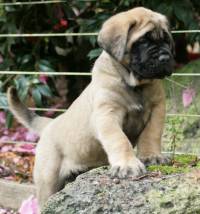 This kind of dog, called a Mastiff or Bandog, is vast, huge, stubborn, ugly, and eager; of a heavy and burdensome body, and therefore of little swiftness; terrible, and frightful to behold; and more fierce than any Arcadian cur, notwithstanding, they are said to have had in their generation, the violent lion.

They are called Mastiff because they are appointed to keep watch on farms, country cottages and other houses that are isolated by reason of distance; when there is fear of thieves, robbers, vandals, and night wanderers. They are also used against the fox and badger; to drive wild and tame swine out of meadows, pastures, church properties and orchards, and to bait and take the bull by the ear when required. One dog, or two at the most, are sufficient for that purpose, be the bull never so monstrous, never so fierce, never so furious, never so stern, never so untameable. 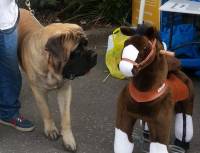 For it is a kind of dog capable of courage, violent and valiant, striking cold fear into the hearts of men but standing in fear of no man, in that no weapons will make him shrink or abridge his boldness. Our Englishmen (to the intent that their dogs might be more angry and fierce) assist nature with art, use, and custom. 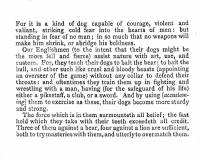 For example, they teach their dogs to bait the bear; to bait the bull and other cruel and bloody beasts (appointing an overseer of the game) without any collar to defend their throats : and often times they train them up in fighting and wrestling with a man, having (to safeguard his life) either a club, spear or a sword. And by accustoming their dogs to this, they become more sturdy and strong. The strength of their bite is unbelievable. Three of them against a bear, four against a lion are sufficient to test their ability.

Why the Mastiff is called a Bandog 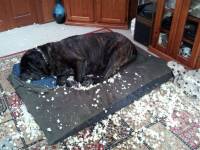 This dog is called a Bandog because he is tied at the gates in the day time. If he was loose, he would cause much mischief because he might arouse fear and terror, by his big barking. The Roman philosopher Cicero in his oration Pro S. Ross (around 100 BC) had been of the opinion, that such dogs that bark in broad daylight should have their legs broken. 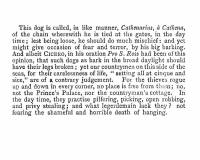 Yet our countrymen are of a contrary opinion. For the thieves wander up and down in every corner, no place is free from them, not the Prince's Palace, nor the countryman's cottage. In the day time, these thieves practice pilfering, pick pocketing, open robbing, and stealing from a shop or from a person, not fearing the shameful and horrible death of hanging.

[1] Dr John Caius, "Of Englishe Dogges: The Diuersities, the Names, the Natures, and the Properties", London, 1576, translated into English by Abraham Fleming, Pages 28-30. The work was originally published in Latin in 1570 as "Johannes Caius, De Canibus Britannicis".

[3] Catalogue of the First Exhibition of Sporting & Other Dogs, Thursday & Friday April 7 & 8, 1864 promoted by the Council of the Acclimatization Society, printed in Melbourne by Mason & Firth, Printers, Flinders Lane West Page 11

[5] Janine Morffew, "The History of Purebred Dogs in Australia" The Mastiff published by OzDog Newspaper 1997 Page 225