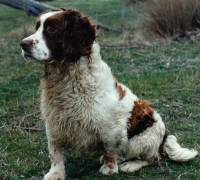 To this day, Gundogs are used for their natural ability to hunt. This can be done purely on a hobby basis. Alternatively, it can have a commercial implication in conservation projects to rid properties of pests. Field Trials, designed to test and determine a dog's natural hunting ability, are conducted on a competitive basis.

Four different specialised Field Trials are commonly conducted. Firstly for Setters and the Pointer (English), secondly for Spaniels, thirdly for Utility Gundogs and lastly for Retrievers. While the Utility Gundogs do all the tasks of the specialised Gundogs and the Retrievers obviously retrieve, we believe a brief outline of the specialised way Setters and the Pointer (English) and the Land Spaniels find game, needs further explanation.

How Setters and the Pointer (English) Work

The dog(s) begins by searching around the edges of the field. This helps to burn off the dog's initial exuberance. It also assist the dogs to establish their bearings and familiarise themselves with the type of smells are required to seek. The dogs then systematically work back and forth, starting near the huntsman and gradually working further and further afield until the bird or game is found. When two dogs work as a team, one works close to the huntsman while the other goes further afield. If either dog finds game, the other dog assists. The correct manner in which the dog assists is to be aware of where the huntsmen and the other dog are positioned. They also respond should the huntsmen send them towards an area such as undergrowth beside a river. 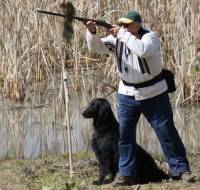 Once game is detected the dog freezes, the Pointer in a more upright position than the Setters which generally crouch. If other dogs are present, they also freeze, "honouring" the first dog's point. The pointing or setting dog remains motionless until the huntsman is in position. The huntsman might also give a command instructing the dog to remain still, remaining in this 'frozen' position until the game is shot. Once shot, it is the Retriever's job to bring the game back to the hunter. 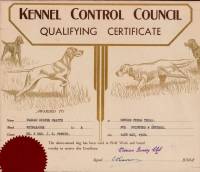 Many modern Setters and Pointers still retain this instinct to find game and 'freeze', despite never having been used for their original purpose. But it is important to understand that, from the earliest times, ethical huntsmen would select only what they wished to eat, releasing the small or young ones.[1]

Historically Field Trials have been popular since gundogs became specialised. In a Trial, dogs should exhibit the desire to range and search for game and the ability to locate and point game either on their own or working with a brace mate. They should also be tractable, capable of retrieving game from land or water and delivering tenderly to hand. They should also be able to trail wounded game and show no signs of gun shyness. They must be over 6 months of age, and should be sound representatives of their breed and free of any major defects that could detract from the functionality of the dog. The Qualifying Certificate shown here for a Field Trial is for a Weimaraner, a qualifying in a Utility Gundog Field Trial in Victoria Australia in 1960. 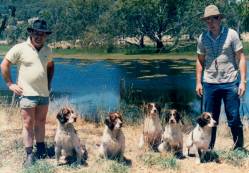 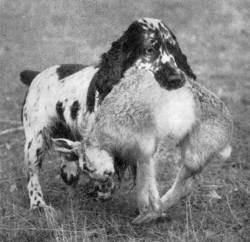 To understand how Spaniels were then adapted to do this specialised work, it is necessary to also consider the early types of guns. These were muzzle loaders which took considerable time to load. So, every shot had to be accurate. The actual shot then projected in a cone, rather than being the one single potentially fatal bullet we know today. This cone of shot put the dogs at risk of being injured. This required Spaniels that did not move fast and disturb the game which had to remain still while the shot was being prepared. So a Spaniel that had shorter limbs that could work in thick cover was developed. Spaniels flushed their game out of the undergrowth, so working in front of the gun.

Today we recognise eight different spaniel breeds, seven varieties of Land Spaniels with the Cocker Spaniel being the especially popular in the 1930's. The eighth variety is the only recognised breed of Water Spaniel we know in Australia today, the Irish Water Spaniel.