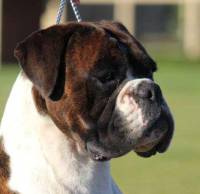 The Boxer is one of our most popular and easily recognisable pure breed dogs. His unique head, balance, clean cut body lines, proud and noble carriage, personality and sense of humour stamp the Boxer into the memory of all who meet him. German in origin, he has been developed slightly differently in various countries throughout the world where he has been owned and bred by many prominent dog people. But as this is an Australian website, the description of the Boxer published here is based on the Breed Standard used in this country.

History of the Boxer

In a similar way to how the Bulldog developed from the early Mastiffs in Britain to produce a butcher's assistant, so the Boxer developed in Germany for the same purpose but from a large German Mastiff type of dog called the Bullenbeisser.

Throughout the middle ages the Bullenbeisser was Germany's only hunting hound[3]. But he hunted alone and not in a pack like the hounds of England. Instead, the Bullenbeisser worked in a particular way by tackling the game head on and holding it with such a grip that the dog was kept from serious injury for enough time for the hunters to reach the game and kill it.

As the centuries rolled by, the large estates were broken up. Then the smaller Bullenbeisser became the butcher's assistant and like the Bulldog of England, the undershot jaw held the bull by the nose.

By about 1880 then, the Bullenbeisser had lost his aristocratic connections and had become a butcher's dog, useful around slaughter houses for rounding up cattle and popular with students and actors for his tractability and good disposition. His undershot jaw gave so strong a grip that he was often unable to let go...[1]

The Boxer becomes a Pure Bred 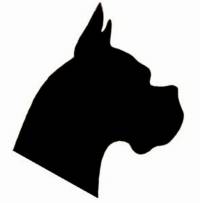 But unlike the Bulldog, the Bullenbeisser retained some height and length of leg so he could dodge the bull's horns by his extreme athleticism rather than by the low stature of the Bulldog. Once the practice of bull baiting was outlawed, the Boxer became popular as a family pet and guard dog retaining his exuberant, playful but lovable personality. Then outline of the head as depicted in the Munich Silhouette (pictured) became the hallmark of the breed giving the Boxer its individual stamp as a pure breed. 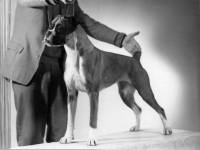 History of Boxers in Australia 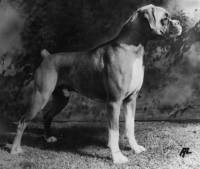 The following year, the colourful personalities Harold ('Skipper') and Stella Taylor imported a dog 'Gremlin Sundago' from England followed by two puppies, 'Gremlin Hillsong' and 'Gremlin Snowboots'. They bred their first Champions with these and then imported another 8 from UK.

The most famous of these was English Champion Panfield Zest (pictured). This dog certainly put Boxers on the map here by not only by his amazing showmanship which won him Best in Show at several of our major 'Royals', but also by stamping his breed type on Boxers throughout Australia[2].

From these early times, many prominent Australian dog personalities imported, bred and showed Boxers, ensuring their place in Australia's dog world. Today, not only rarely does a Show takes place without a quality Boxer competing for the highest awards, the Boxer is well known throughout this country as an easy-to-care-for and reliable family pet. 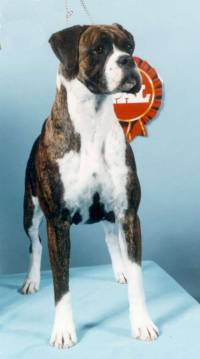 The Boxer is an athletic, squarely-built brachycephalic breed with substance, elegance, nobility and a unique head. Medium sized and clean in outline, he stands 53 - 61 cms (21-24 inches) tall and weighs 28-30 kilos (62-66 pounds). He comes in fawn or brindle with or without attractive white markings which, when placed on the head, should not obliterate his essential black mask. 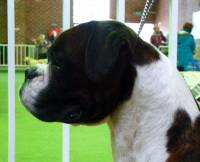 His head is unique because of the outline of the muzzle formed by the clean lips and slightly upturned nose. The skull is slightly arched but not overdone in length caused by a too prominent occiput, or width caused by excessive development of cheek muscles. Instead the skull must be in balance with the whole body and the length of the muzzle to the whole of the head should be 1:3. The shallow furrow running down the skull ends with a definite stop. The black nose should be broad and be set slightly above the level of the foreface as shown in the Munich Silhouette on the left. The historical function of this strong wide muzzle with its definite chin and undershot mouth was to give the dog its grip. The lower edge of the thick, padded upper lip rests upon the lower lip completing the unique outline of the muzzle. The medium sized eyes must have a dark rim. The moderate sized ears have thin texture, lie flat and close to the cheek and are set wide apart on the skull. Some countries outside Australia permit the cropping of Boxer's ears. 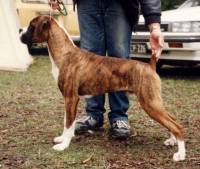 The body in profile, begins at the neck the arched shape of which gives the dog its elegant look. The neck's ample length with lack of dewlap (cleanliness) and arch, runs into clearly defined withers. The short, straight, strong and muscular back finishing with a slightly sloping flat, broad croup and gaily carried high-set tail, completes the square look of the body. The depth of chest should be half the height of the dog and the underline should curve to the rear.

Looking over the dog, the shoulders should not be excessively muscled and the ribs should be well arched but not barrel-shaped. Viewed from the front, the trunk-like forelegs should be straight and parallel, the pasterns short but slightly sloping and the cat-like feet should also be small with tightly arched toes. The hindquarters should be so strongly muscled that the muscles should look like they stand out through the skin as though they were made of plastic. The first and second thighs and long, with the short hock or rear pastern not completely vertical when viewed in profile. He moves with elasticity and energy and carries himself with pride and nobility.

Comparison between the Boxer and the Bullmastiff