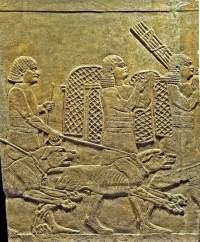 During the first millennium BC, large hunting dogs spread across Europe through the early Eurasian trade routes from the Fertile Crescent. These dogs, pictured with hunters and their nets to catch prey, became the type of mastiff depicted in the ancient Assyrian sculptures so became known as the Assyrian Mastiff. 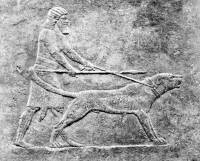 Pugnaces or 'Broad Mouthed dog of Britain' c 600 BC

This fierce type of Molossian dog allegedly originated at Molossis in Ancient Greece. This dog was called the Pugnaces or broad mouthed dog when it came to ancient ancient Britain. It was recorded as early as 600 BC. These dogs became the ancestors of the Bandog or Mastiff (English). As only the strongest dogs would have survived such primitive conditions and journeys by boat with the Phoneticians, these dogs earned the reputation of being some of the finest specimens[1].

The Mastiff Develops in Europe 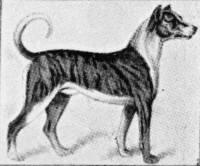 In Europe in subsequent millennia, these large Mastiff type dogs were developed into a number of other types, each for a specific use. Those used for hunting boar and other large prey were called the Boarhound in Germany, or the 'Alaunt' of France. Others were used as strong war dogs that wore spiked collars and were specifically trained for battle. Another common use for these large dogs was as draft dogs.

But the smaller Mastiff type dogs of Germany called the Bullenbeisser were developed for baiting bulls and bull fighting. Writers on sport in Europe about the year 1400 AD describe the Bullenbeisser as a dog of great size, strength and courage, with a large and heavy head and short muzzle.

The Mastiff of England

Students of large Mastiff type dogs believe they were introduced to Britain by adventurous Phonetician traders as early as 600 BC when trading useful metals began. These dogs, forerunners of the Mastiff (English) were used as an aid in warfare. By the time Julius Caesar landed in 54 BC followed by the Roman Conquest some 97 years later in 57 AD, it is recorded that the Molossian dogs of ancient Rome in Italy and the 'broad mouthed dogs of Britain' or 'Pugnaces' were pitted against one another. Trading of these large dogs between Italy and Britain for the next millennium or so is also well documented[2].

In Britain in later millennia the smaller dogs of this type became the butchers' assistants that were the ancestors of today's Bulldogs. In Europe this dog worked similarly to become the Bullenbeisser of Germany, the ancestor of today's Boxer. From these descriptions, a direct descendant of the 'Pugnaces'[4], the various types of Mastiffs as described below, developed.

In 1570, Dr. Johannes Caius named these dogs Mastiffs or Bandogs in his classification that was written in Latin and translated into English by A Fleming in 1576[3]. The original translation of this important work is in my opinion too difficult to read to be printed in its original form. So it appears here as my interpretation in modern English: 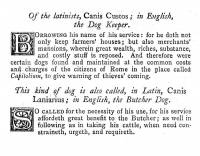 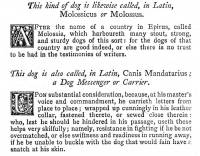 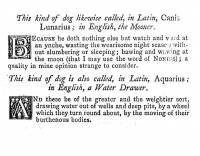 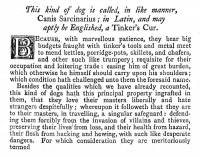 By these signs and tokens, by these notes and arguments, our men discern the cowardly cur from the courageous dog; the bold from the fearful, the butcher from the gentle and tractable. Moreover they speculate whether a whelp of an ill kind is not worth the keeping; and that no dog can serve the sundry uses of men so aptly and so conveniently as this sort of whom we have so largely written already. For if any wish to draw the above-named services into a table, what man more clearly and with a more fierce voice gives warning, either of a wasteful beast or of a spoiling thief, than this? Who by his barking, as good as a burning beacon, foreshadows hazards at hand. What manner of beast, stronger? What servant to his master, more loving? What companion more trusty? What Watchman, more vigilant? What Revenger, more constant? What Messenger, more speedy? What Water Bearer, more painful? And finally what Pack Horse, more patient?

The Dog Keeper, originating in Rome borrowing his name of his service, for he doth not only keep safe farmers' houses; but also merchants' mansions, wherein great wealth, riches, substance, and costly stuff is reposed. And therefore there were certain dogs found and maintained at the common costs and charges of the citizens of Rome in the place called Capitolium, to give warning of thieves' coming.

The Butcher Dog so called for the necessity of his use, for his service is of great benefit to the Butcher; for following his cattle, restraining them or urging them along as required.

The Molossus after the name of a country in Epirus (Greece), called Molossia, which harbours many stout, strong, and sturdy dogs of this sort: for the dogs of that country are good indeed, or else there is no trust to be had in the testimonies of writers.

The Messenger Dog.  Upon substantial consideration, at his master's voice and command, he carries letters from one place to another; wrapped up cunningly in his leather collar, fastened, or sewn within. Should he be hindered in his passage, he skillfully resists by fighting or swiftly running away as the dog is unwilling to have someone unbuckle the collar by snatching at his skin.

The Mooner Dog. This kind of dog called a Mooner because he wastes the wearisome night season without slumbering or sleeping; baying at the moon which in my opinion is strange to consider

The Water Drawer These were large and heavy, drawing water out of wells and deep pits, by a wheel which they turn round as they are fastened to it by a yoke.

The Tinker's Cur (Pack Horse) is so called because, with marvellous patience, they carry big bags filled with tinker's tools and metal meant to mend kettles, porridge-pots, skillets, and other useless goods to trade: easing their masters of great burdens, which otherwise they themselves would carry upon their shoulders.

Besides the qualities which we have already recounted, these dogs instinctively love their masters liberally and hate strangers. Therefore they are a safeguard to their masters: defending them forcibly from villains and thieves, preserving their lives from loss, their health from hazard, their flesh from attacks by knives or other sharp instruments, and such like desperate dangers. For which consideration they are meritoriously termed.

[3] Dr John Caius, "Of Englishe Dogges: The Diuersities, the Names, the Natures, and the Properties", London, 1576, translated into English by Abraham Fleming, Pages 30-32, 35. The work was originally published in Latin in 1570 as "Johannes Caius, De Canibus Britannicis".