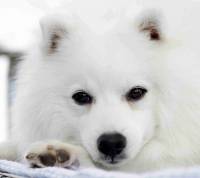 A medium sized white dog, the Japanese Spitz developed as a pure breed during the 1900's. He comes in only one size and although usually a companion or pet dog, he also makes an excellent watchdog.

History of the Japanese Spitz 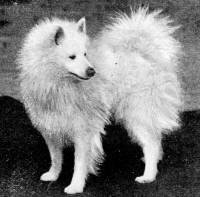 The first is that the Japanese Spitz is a direct descendant of the herding and sled dog, the Samoyed. This theory is a result of them originally being called called 'Samo' like their larger relative. Certainly it is probable that these two breeds had a common background centuries ago. But in addition to the difference in body proportions and function, this theory has no documented evidence. 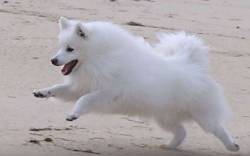 The second is that the Japanese Spitz was created from and developed in Japan by expert cynologists between 1920 and 1950 from the large sized white German Spitz. This theory purports several lines of white German Spitz were imported into Japan from Russia and China. However, there is no documented evidence about either these imports or the pedigrees of the Japanese Spitz that were supposedly exhibited at a Tokyo Dog show in 1921. 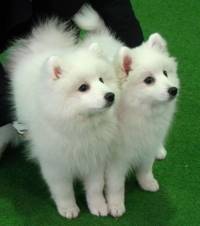 Because of consistency of pedigree records kept by the Nippon Spitz Association (NCA), it is generally accepted that they founded the modern Japanese Spitz. The NCA has documents to support that the Japanese Spitz descends from early white Spitz that came aboard a rescue cargo-ship from Canada following an earthquake in Tokyo in 1923. The NCA also has records to prove that similar dogs from America followed. 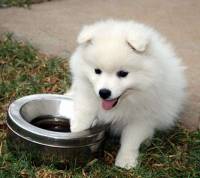 Jiro Ito meticulously kept these records in Tsuchiura, Ibaragi Perfecture, north-east of Tokyo[1] right through the Second World War until the Japanese Kennel Club recognised the breed in 1947 and adopted the Breed Standard in 1953.

In 1973 the first exports from Japan arrived in Sweden who recognised the Japanese Spitz as a pure breed by 1976. In 1977, these Swedish dogs founded the breed in UK. Despite England also importing directly from Japan in 1980, it would be 1988 before Challenge Certificates were awarded.[2]

History of Japanese Spitz in Australia 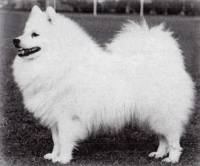 Meanwhile the first two imports into Australia came from UK in 1979 - 1980. These were Ch Norsken Amida and Ch Norsken Diabutsu. These were followed by Ch Kaipoi Count Passola, bred in New Zealand from UK imports. Other UK imports followed including Owlcotes Snow Quest who was an early Best in Show winner. After these initial successes, in 1985 Lacebark kennels was established in Victoria and has piloted the breed in this country ever since [3]. 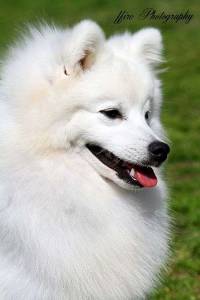 The wedge-shaped, moderately broad head is of medium size without coarseness. The slightly rounded skull is broadest at occiput. The stop is well defined. The muzzle should be in proportion to the head with black firm, tight lips and a small, black, nose and closes is a normal scissors bite. The dark oval eyes are of moderate size and set rather obliquely but and not too wide apart. The eye rims are black.The triangular ears are high set and stand erect, facing forward but not too wide apart. 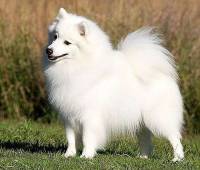 The strong neck is arched and of moderate length. The body is longer than height at withers  and the back is short, straight and flexible. The loins broad and firm with a level croup and high set tail. 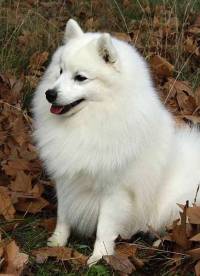 The well-cushioned feet are small round and cat-like, with black pads and preferably dark nails. The chest is broad and deep, the ribs are well sprung and the belly firm with moderate tuck-up.The well proportioned muscular hindquarters moderately angulated with hind legs parallel to each other when viewed from rear. The moderate length, well plumbed tail is high set and carried curved over the back. 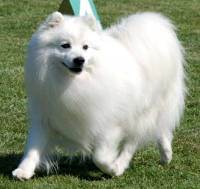 He moves with a light, nimble, active, energetic but smooth gait. The pure white coat is shorter on face, ears, front of fore and hind legs and below the hocks. The remainder of body coat is a long double coat consisting of a straight and stand-off outer coat and a profuse, short, dense undercoat which is soft in texture. The mane on neck and shoulders should reach down to the brisket and the tail should be profusely covered with long hair.

As stated above, the Japanese Spitz became known outside Japan in during the late 1970s. Being roughly the same size as the German Spitz (Mittel) which was recognized by 1985, there was confusion between these two breeds. This was exacerbated when several German Spitz were imported into the U.K in an attempt to resurrect colours previously lost to the Pomeranian, particularly white. Today, some Pomeranians still have German Spitz in their pedigrees. To assist in recognizing the correct breed type of these breeds, the table below has been constructed.

Today, the major differences between these three breeds are: